PM to visit Karnataka, TN, Andhra and Telangana on 11th and 12th Nov 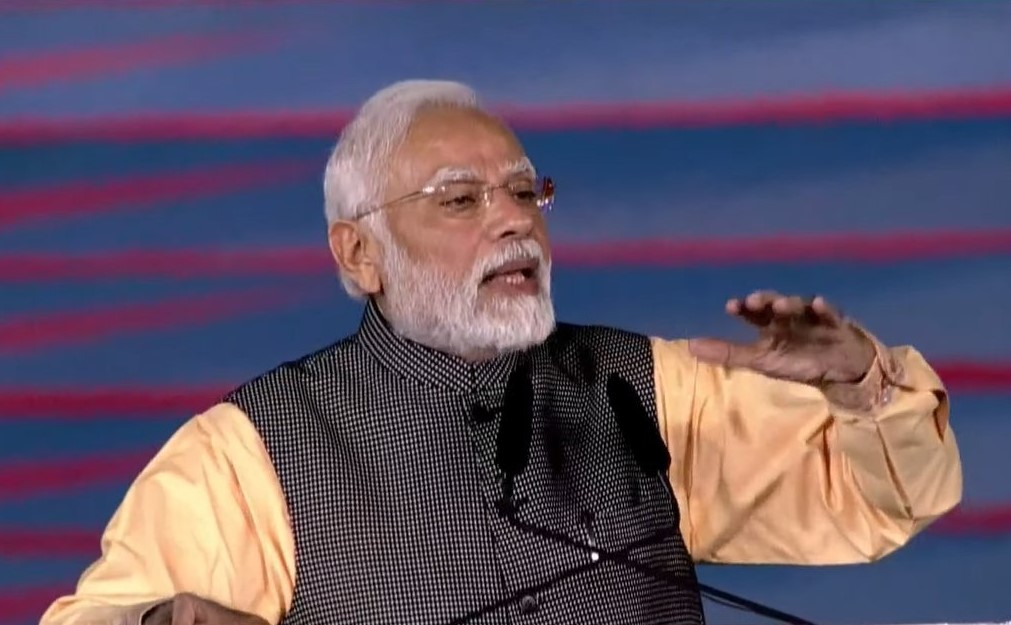 Prime Minister will inaugurate the Terminal 2 of Kempegowda International Airport at Bengaluru, built at a cost of around Rs. 5000 crore. The terminal will double the passenger handling capacity of the airport to 5-6 crore passengers per annum, from the current capacity of about 2.5 crore.

Terminal 2 is designed as a tribute to the Garden city of Bengaluru and the passenger experience is meant to be a “walk in the garden”. Passengers will travel through 10,000+ sqmts of green walls, hanging gardens and outdoor gardens. The Airport has already established a benchmark in sustainability with 100% usage of renewable energy across the campus.

Terminal 2 has been created with sustainability principles woven into the design. Based on the sustainability initiatives, Terminal 2 will be the largest terminal in the world to be pre certified platinum rating by US GBC (green building council) prior to commencing operations. The theme of ‘Naurasa’ unites all the commissioned artworks for Terminal 2. The artworks reflect the heritage and culture of Karnataka as well as the broader Indian ethos.

Overall, the design and architecture of Terminal 2 have been influenced by four guiding principles: Terminal in a garden, sustainability, technology and art & culture. All these facets showcase T2 as a terminal that is modern yet rooted in nature and offers a memorable ‘destination’ experience to all travellers.

Prime Minister will flag off Chennai-Mysuru Vande Bharat Express. Bengaluru at Kranthiveera Sangolli Rayanna (KSR) Railway Station. This will be the fifth Vande Bharat Express train in the country and first such train in South India. It will enhance connectivity between the industrial hub of Chennai and the Tech & Startup hub of Bengaluru and the famous tourist city of Mysuru.

PM will also flag off the Bharat Gaurav Kashi Yatra train from Bengaluru KSR Railway Station. Karnataka is the first state to take up this train under the Bharat Gaurav scheme in which Government of Karnataka and Ministry of Railways are working together to send pilgrims from Karnataka to Kashi. The pilgrims will be provided comfortable stay and guidance for visiting Kashi, Ayodhya and Prayagraj.

Prime Minister will unveil 108 metre long bronze statue of Sri Nadaprabhu Kempegowda. It is being built to commemorate the contribution of Nadaprabhu Kempegowda, the founder of the city, towards the growth of Bengaluru. Conceptualized and sculpted by Ram V Sutar of Statue of Unity fame, 98 tonnes of bronze and 120 tonnes of steel have gone into making this statue.

Prime Minister will dedicate to the nation and lay the foundation stone of projects worth over Rs. 10,500 crores. He will lay the foundation stone of Andhra Pradesh section of six lane Greenfield Raipur- Visakhapatnam Economic Corridor. It will be built at a cost of more than Rs 3750 crore. The Economic Corridor will provide faster connectivity between Industrial Nodes of Chhattisgarh & Odisha to Visakhapatnam Port & Chennai – Kolkata National Highway.

It will also improve connectivity to tribal and backward areas of Andhra Pradesh and Odisha. Prime Minister will also lay the foundation stone of a dedicated Port Road from Convent Junction to Sheela Nagar Junction in Visakhapatnam. It will ease traffic congestion in Visakhapatnam City by segregating local and port bound goods traffic. He will also dedicate to the nation, Narasannapeta to Pathapatnam section of NH-326A built at a cost of more than Rs 200 crore as a part of Srikakulam-Gajapati Corridor. The project would provide better connectivity in the region.

Prime Minister will dedicate to the nation, U-field Onshore Deep water block project of ONGC in Andhra Pradesh, developed at a cost of more than Rs. 2900 crores. It is the deepest Gas discovery of the project with gas production potential of about 3 million metric standard cubic metres per day (MMSCMD). He will lay the foundation stone of Srikakulam Angul Natural Gas Pipeline Project of GAIL with capacity of around 6.65 MMSCMD.

Prime Minister will lay the foundation stone for redevelopment of Visakhapatnam Railway Station, to be done at a cost of around Rs 450 crores. The redeveloped station would cater to 75,000 passengers per day and will improve passenger experience by providing modern amenities.

Prime Minister will also lay the foundation stone of modernization and upgradation of Visakhapatnam Fishing Harbour. The total cost of the project is around Rs. 150 crores. The fishing harbour, after its upgradation and modernisation will double the handling capacity from 150 Tons per day to about 300 Tons per day, provide safe landing and berthing and other modern infrastructure facilities reduce turnaround time in the jetty, reduce wastage and help improve price realisation.

The project has been set up under the aegis of Ramagundam Fertilizers and Chemicals Limited (RFCL) which is a Joint Venture Company of National Fertilizers Limited (NFL), Engineers India Ltd (EIL) and Fertilizer Corporation of India Limited (FCIL). RFCL was entrusted with the responsibility of setting up the New Ammonia-Urea Plant with investment of more than Rs. 6300 crores. Gas to RFCL Plant will be supplied through Jagdishpur – Phulpur- Haldia Pipeline.

The Plant would ensure adequate and timely supply of urea fertilizer to the farmers in the state of Telangana as well as in Andhra Pradesh, Karnataka, Chattisgarh and Maharashtra. The Plant would not only improve the availability of fertilizer but will also boost overall economic development in the region including development of infrastructures like roads, railways, ancillary industry etc.

Apart from this, the region will benefit from development of MSME vendors for supply of various goods for the factory. RFCL’s ‘Bharat Urea’ will provide a tremendous boost to the economy by not only reducing imports but also by giving an impetus to the local farmers through timely supply of fertilizers and extension services.

Prime Minister will dedicate Bhadrachalam Road- Sattupalli rail line to the nation, which has been built at a cost of around Rs. 1000 crore. He will also lay the foundation stone of various road projects worth over Rs. 2200 crores, namely Medak-Siddipet-Elkathurthy section of NH-765DG; Bodhan-Basar-Bhainsa section of NH-161BB; Sironcha to Mahadevpur Section of NH-353C.