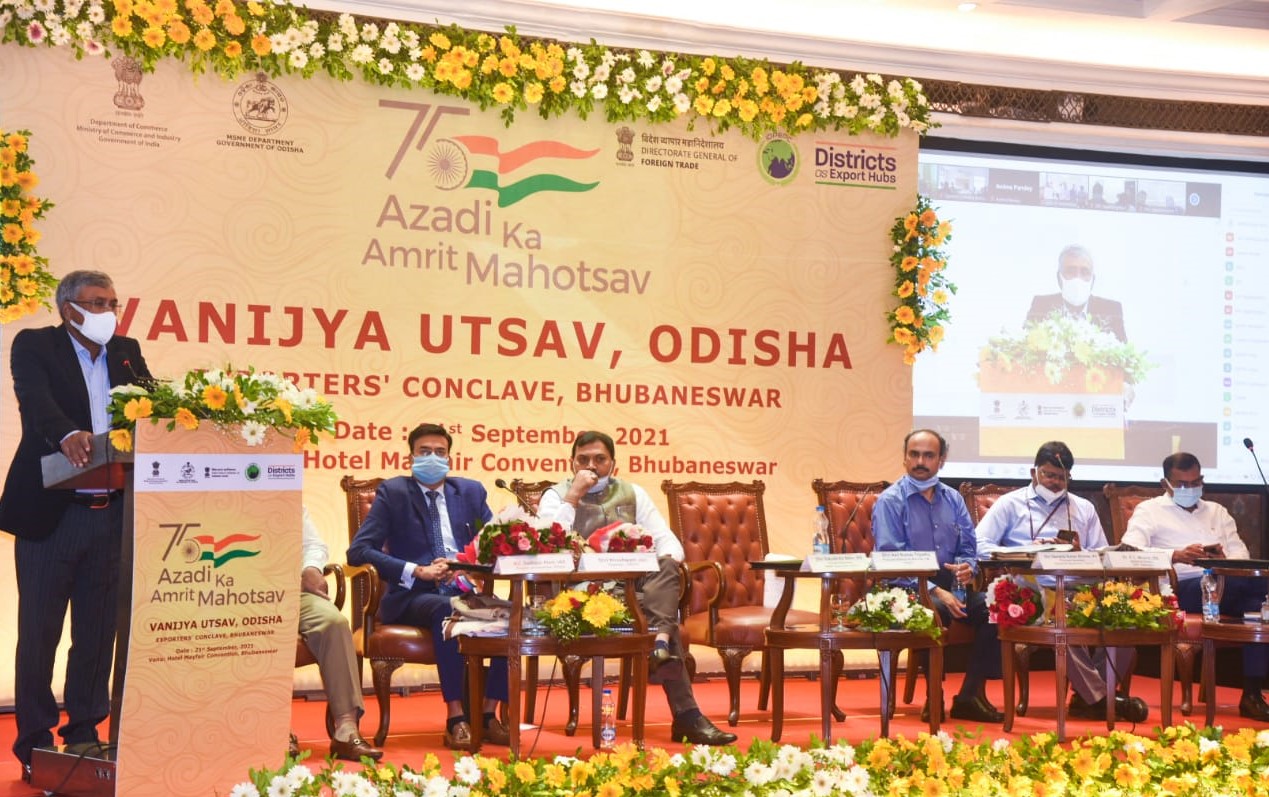 Bhubaneswar : Foreign trade is very important when India targets to achieve 400 billion dollar merchandise export in this fiscal said Shri Asit Kumar Tripathy, Principal Advisor to the Chief Minister of Odisha while participating in the Vanijya Utsav in Bhubaneswar today.
Odisha has set a target of achieving Rs 1 lakh crore exports by 2025, but the state is confident to achieve the feat in this year itself. “Odisha is the steel capital of India now, two aluminum parks are coming up.

The state is set to become a top exporter in the country,” he said.
The Department of Commerce (DoC) under the Ministry of Commerce and Industry, Government of India and DGFT in association with the state MSME and Industries Departments today organized the Vanijya Utsav, an Exporter’s Conclave as part of the Azadi Ka Amrit Mahotsav to showcase India as a rising economic force.

“India has set a target of 400 billon dollar export, which is a quantum jump from the current export of 291 billion dollar. It will be possible with collaborations of policy makers and stakeholders,” Shri Prafulla Chandra Mishra, Statistical Advisor, DGFT, Ministry of Commerce and Industry said today.

Satyabrata Sahu Principal Secretary, MSME Department, Government of Odisha said that despite the pandemic, Odisha has improved in export. “The state has rich mines, mineral, marine, agricultural and other valuable resources and is contributing to the economic growth nationally. In the first quarter of this year alone, Rs 41000 crore worth of export has already been achieved,” he said.

Hemant Sharma, Principal Secretary, Industries Department, Government of Odisha said initiative like Vanijya Utsav coinciding with Azadi Ka Amrit Mahotsav is the need of the hour. “We need to focus on our future export policies. We need to start thinking about plans for next 25 years so that when we celebrate India’s 100th year of independence, we will be able to make it memorable,” he said.

The event was organized in hybrid mode where senior officials from government of Odisha, DGFT, Indian Oilseeds and Produce Export Promotion Council (IOPEPC), ECGC, FIEO and other stake holders made excellent presentations for showcasing India as a rising economic force.

The conclave was attended by exporters of different fields from different regions of the state. Besides, representatives from seven districts including Angul, Sundargarh, Sambalpur and Jagatsinghpur connected in the conclave through virtual mode. Experts have brainstormed on different possibilities to increase the export potential of the state and of the country.