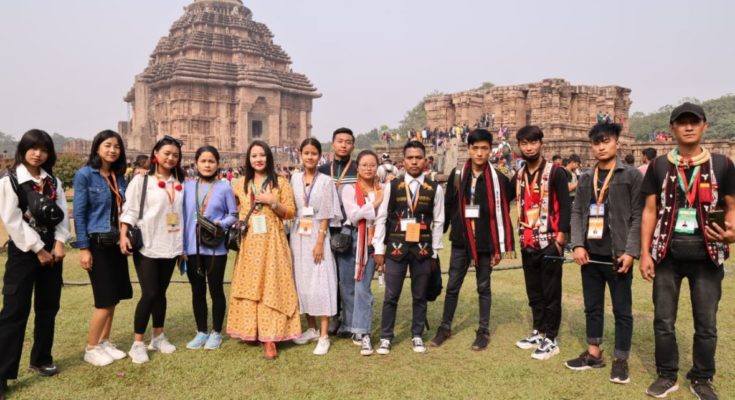 National Kala Utsav: As a part of the ongoing 8th national Kala Utsav 2022-23, the participating children from across the country were taken on an excursion to the ancient Konark Temple and Dhauli Shanti Stupa to experience their enthralling architectural beauty and the spiritual essence.

While inaugurating the Utsav on the 3rd of January, 2023, the Union Minister of Education had expressed his keen desire that the participating children must be taken to the Konark Sun Temple. In the course of his inaugural speech, Shri Pradhan narrated the story of the 12-year-old child of an artisan, Dharmapada, who had miraculously placed the kalashon the top of the temple.

He further added that Dharmapada could develop his supreme skill without any institutional or outside help. But in modern age all such latent artistic talent need to be identified and nurtured and the NCERT and Kala Utsav would play a vital role in accomplishing that. The minister expressed his desire and hope that the young visiting artists from across the country would get inspired by the architectural finesse of the sun temple and the folklore of Dharmapada.

The competitions which ended on 5 January 2023, were concluded by a joyous campfire at the RIE, Bhubaneswar grounds and was attended by all the students. Everyone had a gala time joined by the teachers and the staff of NCERT. Students, teachers, escorts from all the States, UTs, KVS and NVS had gathered on the grounds and the holistic amalgamation of different cultures, languages was indeed a sight to behold.

The excursion will not only give the students an opportunity to know more about the elaborate history of the state of Odisha, but also to interact with one another and create a bonding, giving a true meaning to Ek Bharat Shreshtha Bharat, as wished by the honourable Union Minister of Education, Shri Dharmendra Pradhan.