No differences between Hindi and any local language; Shah at Hindi Diwas 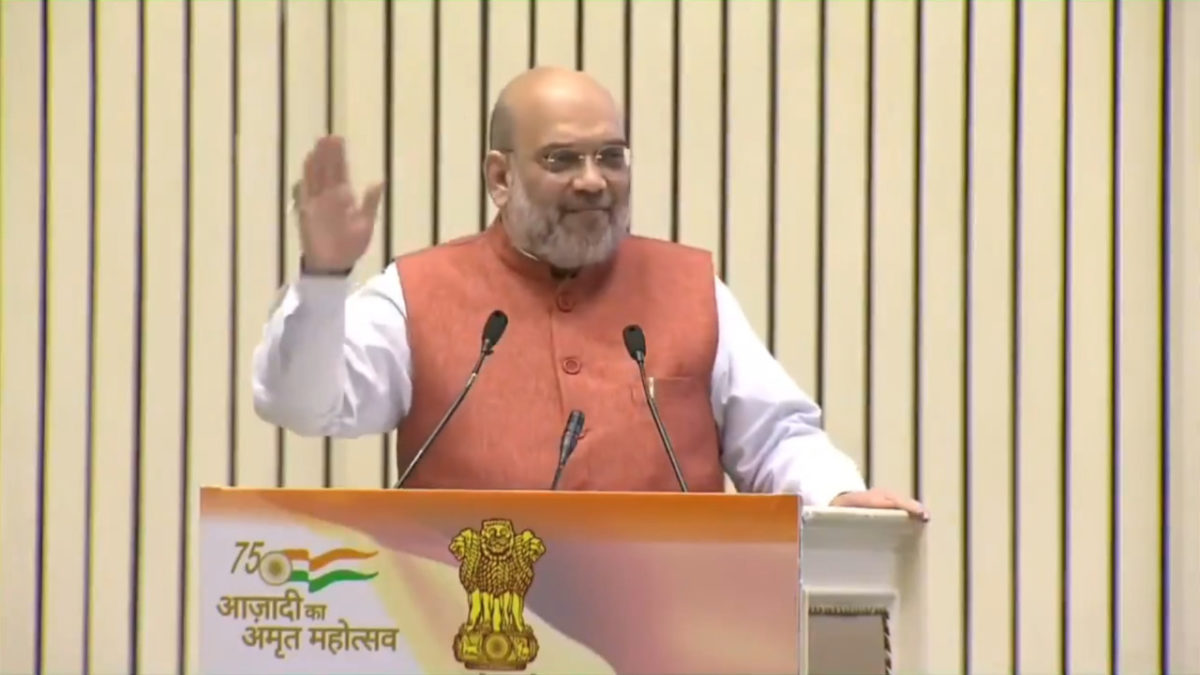 New Delhi: The Union Minister of Home Affairs and Minister of Cooperation, Amit Shah attended the Hindi Divas – 2021 programme as the Chief Guest at Vigyan Bhawan, New Delhi today. On this occasion,  Shah also presented the Rajbhasha Kirti and Rajbhasha Gaurav Awards to Ministries, Departments, Undertakings who have done excellent work in the Official Language during the years 2018-19, 2019-20 and 2020-21.

The Union Minister of Home Affairs and Minister of Cooperation also released the 160th issue of the “Rajbhasha Bharati” booklet. Several dignitaries including Union Ministers of State for Home, Nityanand Rai, Shri Ajay Kumar Mishra and Shri Nishith Pramanik, Union Home Secretary, Secretary, Department of Official Language and senior officers of the Government of India were also present on the occasion.

In his address, the Union Minister of Home Affairs and Minister of Cooperation said that when we accepted the Constitution, along with it, we also decided on 14th September, 1949 that the official language of India would be Hindi and the its script would be Devanagari. Amit Shah said that these awards inspire many people and give them the encouragement to do more in promoting the Official Language.

While congratulating the non-Hindi award winners, Shah said that you have done a great job to bring the local language as well as the Official Language to the state you come from. He said there are no differences between Hindi and any local language, Hindi is friend of all Indian languages ​​ and it can progress only through co-existence

Shah said that three words – Swadeshi, Swabhasha and Swaraj – greatly contributed to the Freedom Struggle and these were the three strong pillars of the Freedom Struggle. The Prime Minister has launched a huge campaign of a Self-Reliant India to promote Swadeshi. All of us together, especially the new generation, have strengthened our own languages.

He said that there is no need to be hesitant, when the Prime Minister of the country speaks in Hindi, speaks in his own language, even at the highest global stage, then what should we be hesitant about? Shri Shah said that gone are the days when people would judge someone for speaking in Hindi. You will be assessed on the basis of your work and abilities, and, not on the basis of language.

Shah said that no person can express herself or himself better than in his own language and we have to explain to our younger generation that language can never be a hindrance, we should use our language with pride and without hesitation. He said that it is time for the youth of the country to realize that we will not give up our languages. He also requested parents to speak in their Mother tongue with their children at home even if their children are studying in the English medium, otherwise children will be cut off from their roots.

A foreign language cannot introduce us to the great culture and pride of India, cannot connect with the ideological body of the country, only the Mother tongue can keep a child connected with her or his local roots and those who are cut off from their roots never progress, only a tree with deep, strong and wide roots, can rise.

Shah said that during the Independence movement under the leadership of Mahatma Gandhi, many leaders had given great importance to the use of the local language. Be it Mahatma Gandhi, Rajendra Prasad, Pandit Nehru, Sardar Vallabhbhai Patel, K.M. Munshi and Vinoba Bhave devoted their whole life to strengthen Indian languages. Mahatma Gandhi had also associated the official language with nationalism, and, he had said that if you want to understand the consciousness of this country, then you cannot understand it without our languages.

Amit Shah said that this thought of Gandhiji is as relevant today as it was from 1920 to 1947. Gandhiji himself published newspapers for this and also contested the election for the Gujarat Sahitya Parishad and became the President of the Sahitya Parishad and he also compiled a Gujarati dictionary. A person who was submerged in the Freedom Movement and leading it, had time to devote to strengthening his own Mother tongue. This demonstrates the importance of strengthening the official language Hindi.

Amit Shah said that our nation is full of diversities, there are many states and Union Territories and all have their own proud history recorded in different local languages. He said that the history of every state of the country, which is written in the local language, should be translated into the Official Language so that the entire country can read this history.

He said that every child has the right to know about the struggle for Swaraj, which took place in Maharashtra under the leadership of Shivaji Maharaj, or the struggle which took place in Gujarat, and they will know this only when it is translated into the Official Language. He said that is why Guru Rabindranath Tagore had said that Indian culture is like a fully blossomed lotus, each petal of which is like our regional languages and the lotus is our official language itself.

He had beautifully tried to present our diversity in creative language. Amit Shah said that from 1857 to 1947, during the Independence Movement, a great contribution was made through journalism in Indian languages, the Official Language and we are going to compile that, too. The history of many wars which took place across the country during the past 100 years, the history of all of these is in local languages, they are also going to be translated.

He said that expression becomes simple and natural when it is in one’s own language. He said that the Prime Minister has brought a New Education Policy and he has laid special emphasis on giving a place to the local languages and Official Language in the New Education Policy. It has been provided that education up to Grade 5 should be in the local language and the Mother tongue. Effort has been made to integrate learning of Indian languages at the school and higher education level.

Fourteen colleges in eight states will begin teaching technical courses such as in engineering colleges in five languages, including Hindi, Telugu, Tamil, Marathi and Bengali. The plan to establish the Indian Institute of Translation and Interpretation for the preservation and development of Indian languages ​​is also laid down in the New Education Policy which will give a long-term thrust to our languages.

E-courses are also being prepared in regional languages, so that children studying online can also study in their own language, and the Official Language. By including many aspects in the New Education Policy, the Prime Minister has given a huge impetus to our movement.

The Union Minister of Home Affairs and Minister of Cooperation said there was a time when Indian leaders used to go abroad, people could hardly understand what our leaders spoke there. Former Prime Minister, the Late Atal Bihari Vajpayee started speaking in Hindi when abroad and the Prime Minister Narendra Modi has made it customary that wherever he is at any international forum, he will address it only in Hindi and this has helped in establishing the Official Language. The hesitation, the sense of smallness that existed in the minds of many people has disappeared. He said that when there is change, there is also a change in the mindset, it is our responsibility to change the mindset of the people.

Shah said India has battled the COVID-19 pandemic very well. India came out of the pandemic with the least damage and that is because the Prime Minister Narendra Modi interacted with Chief Ministers, Governors, Traders’ bodies, doctors and addressed the people of the country on 35 occasions in the Official Language. This helped in spreading awareness about the commitment of the government to the grassroots level and helped in combating COVID-19 across the country.

On this occasion, Minister of State for Home Affairs, Shri Ajay Kumar Mishra said that our country is a very ancient country which has a tradition of culture and knowledge. Different languages have ​​developed in different regions of the country, but Hindi is the most spoken and understood language.