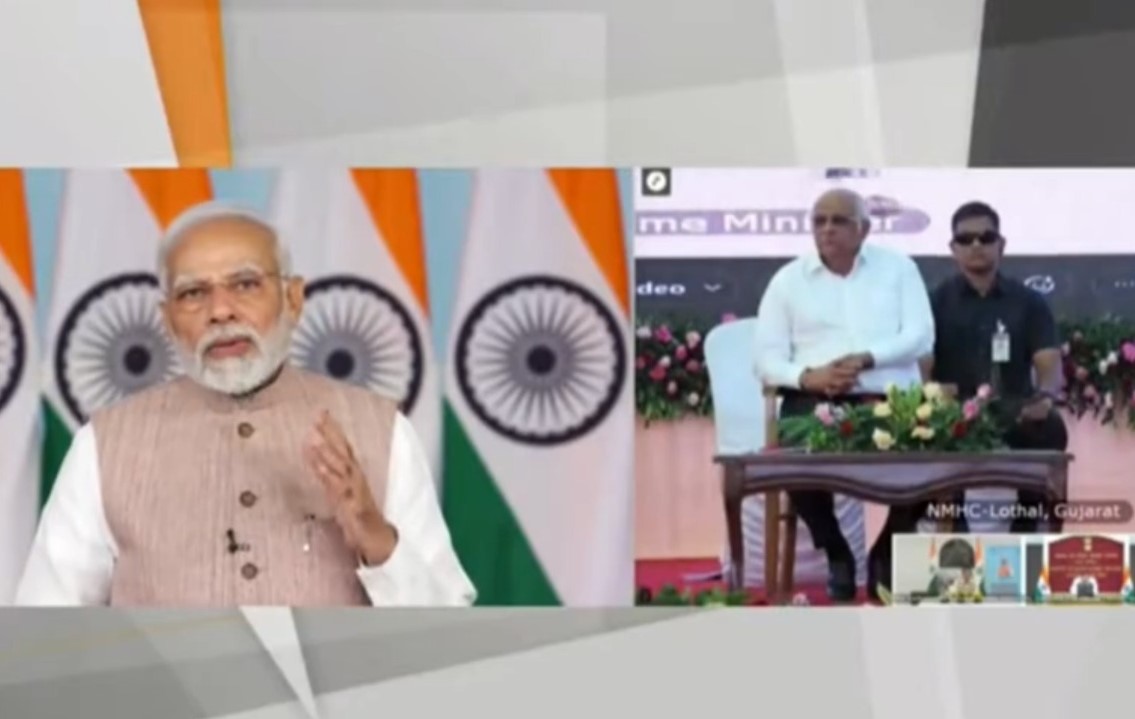 New Delhi: The Prime Minister Shri Narendra Modi reviewed the progress work of the Project of National Maritime Heritage Complex (NMHC) developing at Lothal in Gujarat, by the Ministry of Ports, Shipping and Waterways (MoPSW)in collaboration with Government of Gujarat. The Rs.3500 crore project is being built at the historic Indus Valley Civilization region of Lothal in Gujarat under the Sagarmala Scheme of the Ministry of Ports, Shipping and Waterways.

The Prime Minister reviewed the work progress of the NMHC and conveyed his satisfaction on the pace of the project. While addressing a huge gathering of the people from the neighboring villages and nearby areas, The Prime Minister stated that “India has a rich maritime history which were ignored for long. We should preserve it so we decided to recreate Dholaveera and Lothal in the same way as they were during their peak time in ancient time”.

‘NMHC would be developed in an area of about 400 acres with various unique structures such as National Maritime Heritage Museum, Light House Museum, Heritage Theme Park, Museum Themed Hotels & Maritime themed eco-resorts, Maritime Institute etc. which would be developed in a phased manner. Once completed, this project will provide tremendous job opportunities to the local people and will transform the socio-economic condition of the entire region’ said, Union Minister Shri Sarbananda Sonowal.

‘NMHC is to be developed as a first of its kind in the country dedicated to the legacy of Maritime Heritage of India, to showcase India’s rich and diverse maritime glory. It will also highlight the robust maritime history and vibrant coastal tradition of our country at one place and would uplift the image of India’s Maritime Heritage in the international forum’, he added.

Chief Minister of Gujarat emphasized upon the historical importance of Lothal and maritime traditions of Gujarat. Union Minister Ministry of Health and Family Welfare Shri Mansukh Mandaviya while highlighting the various aspects and prospects of this project, stressed upon the technological innovations and real life experience being provided in this proposed NMHC to the visitors.

Lothal was one among the prominent cities of the traditional Harappan civilization dating to 2400 BC, located in Gujarat, a crucial western state of India. Archaeological excavations have discovered the oldest man-made dockyard, over 5000 years old, in Lothal. A maritime heritage complex at such a crucial location will fit the historical importance of Lothal and help it become an area of extraordinary and unparalleled maritime heritage.

It is proposed to have a pavilion for each coastal State and Union Territory (UT) of India at NMHC to showcase the artifacts/maritime heritage of the specific States and Union Territories. Each coastal State and UT can present its vivid cultural identities including both tangible and intangible heritage at NMHC and represent India\’s cultural diversity at international level.

The unique feature of NMHC is the recreation of ancient Lothal city, which is one of the prominent cities of the ancient Indus valley civilization dating to 2400 BC. Apart from that, the evolution of India’s Maritime Heritage during various eras would be exhibited through various galleries. NMHC would have pavilion for each coastal states and union territories to showcase the artefacts/maritime heritage of the respective states and union territories. It is also planned to provide the following types of digital experiences to the visitors:

Short films on important events related to the Maritime history.
Various theme parks would be developed at NMHC such as Maritime & Naval Theme Park, Monuments Park, Climate Change Theme Park, Adventure & Amusement Theme Park through public-private partnership which would provide a complete package and fulfilling experience to the visitors. These also provide opportunity for the private investments in this area along with lots of employment opportunities to the people of the region.

The Prime Minister during his recent visit to Bhavnagar had highlighted the significance of Lothal and the proposed NMHC project for the Nation as well as to Gujarat which will make its own identity just like the project of Statue of Unity.