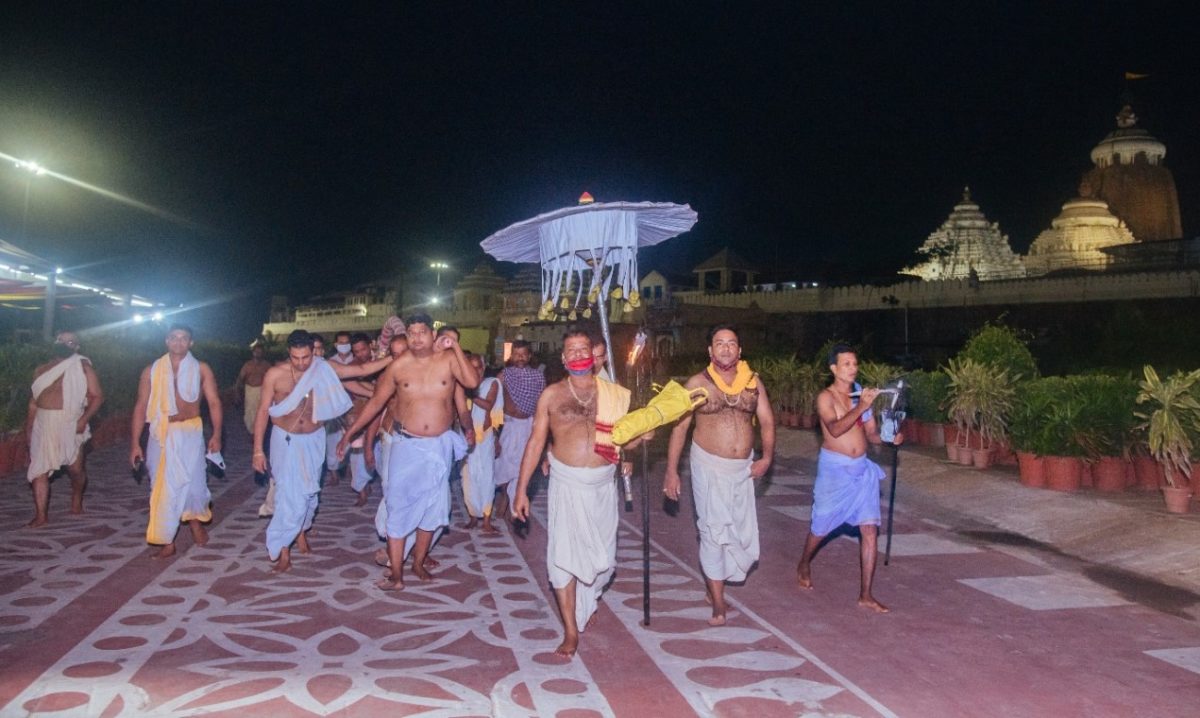 Puri, The ritual of “Rajendrabhisheka” is observed on the tenth day of the bright fortnight of “Jyestha” month. On this day, after the “Sandhya Dhupa”, Shree Madana Mohana receives the sacred “Agyanmala” or the consent garland of Mahaprabhu and is then carried to the “Khatuli” placed near the “Bhoga Bata” next to Shree Ganesha. After that the temple is cleaned followed by the closing of “Jaya-Bijaya Dwara”, making the “Jagamohana” of the temple where the “Alata Lagi” ritual is performed completely dark.

Then a servitor informs the Lord about the proposal of Goddess Rukmini’s marriage. After that, Lord MadanaMohan is carried & seated on the chariot placed near “Batamula” for conducting the “Rajendrabhisheka” ritual. The Lord then circles or move around the temple compound in a procession, then returns and halts at the “Batamula”.

A servitor plays the role as “Kuta Kautuka” sage and receives white flowers from the “Palia Sebaka”. The servitor then keeps on bowing to the Lord with flowers in his hand while moving towards “Dakhini Ghara”. At the “Dakhini Ghara” the Lord is seated on the bed for the “Panchamruta Mahasnana” ritual, followed by “Besha” with flowers and “Chandana”.

The offering of “Sitala Bhoga” followed by “Khiri, Amalu Bhoga” and “Bandapana” is then performed after which the Lord is moved to “Dakhini Ghara”. During this “Abhisheka” ritual, the musical instruments such as “Ghanta”, “Kahali” and “Mahuri” are played. After the completion of the ritual “Pana Bhoga” is offered and other rituals are conducted.