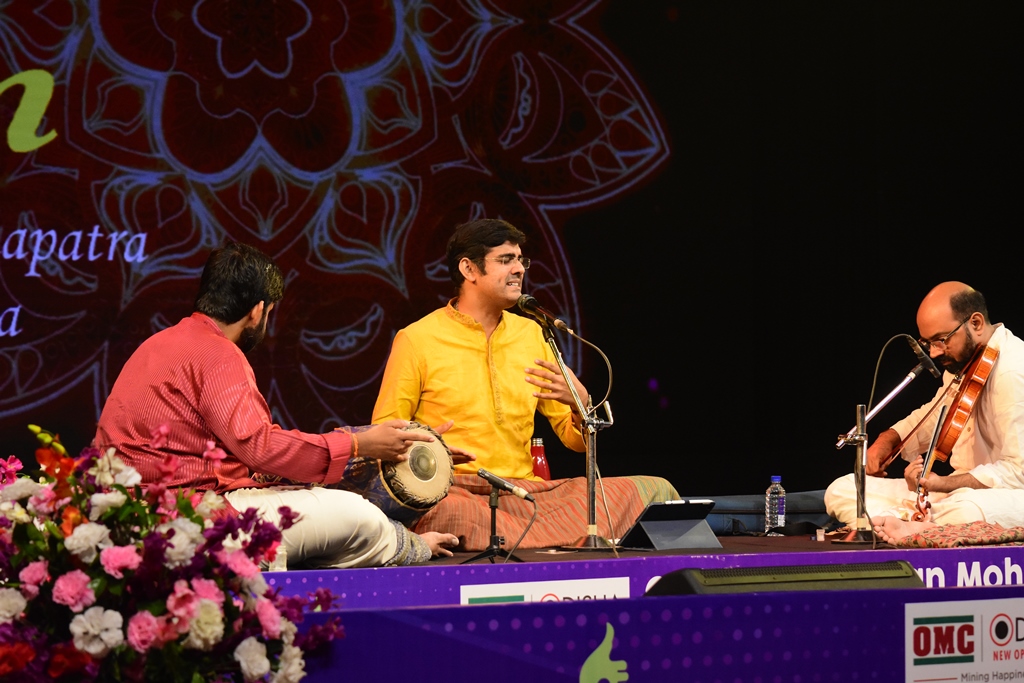 Bhubaneswar: Srjan hosted the third evening of the 28th OMC Guru Kelucharan Mohapatra Award Festival 2022 on September 7th. The evening proved to be a musical delight for audiences who witnessed memorable tracks by Odisha’s very own musical ensemble Shivagni.

He was accompanied by Shri V Sanjeev on the Violin and Shri NC Bharadwaj on the Mridangam. Their rich experience as soloists as well as accompanying artistes provided brilliant accompaniment to the musical exposition of Shri Sikkil Gurucharan. His first presentation was set to Raag Mala Swaras followed by Raag Ganga Bhusan that allowed him to delve deep into the complexities of his Carnatic vocal range with great skill. The versatile trio the tone for the evening to come.

Srjan then hosted Vidushi Paramita Maitra and her Kathak ensemble, Nrityangan Kathak Kendra, based in Berhampore, West Bengal. Their performance, KathakSamanvay, began with Mrityunjaya, taken from the Mahamrityunjay mantra in the Rig Veda and addressed to Tryambaka or “The Three-Eyed One” Lord Shiva or Rudra. The mantra plays a significant role in Kathak, symbolising life-giving nectar for emotional and physical well-being of the individual and leading to longevity.

Nrityangan Kathak Kendra’s next presentation Dhamar showcased the Nritta aspects of Kathak dance in a metrical cycle of 14 beats. This composition highlighted the rhythmic intricacies of the Taal well, as the dancers executed it with neat footwork, led by their Guru. They then presented an Abhinayaor expressive dance piece. The Ghazal Uthayeja Unke Sitawas presented with a shayari. This Ghazal was performed with poise and grace.

Their final presentation, Badyachitra portrayed a picture drawn by a musical drum with the brush of the Ghungroo. Badyachitra beautifully highlighted four percussion instruments namely the Pakhawaj, Khol, Tabla, and Dhol, with the Pakhawaj representing the Tandav in Chavtal (set to 12 beats) and the Khol representing Lasya through Shringara Rasa. Set to the music composition of Shri Ashok Datta, the choreography and concept by Smt. Paramita Maitra was performed skilfully by her ensemble.

This versatile presentation concluded the penultimate evening of the festival. On the final evening, Srjan will conduct the award ceremony, with the presentation of the coveted Guru KelucharanMohapatra Award 2022 to Guru Niranjan Rout, eminent Odissi dance guru and to Guru Ramhari Das, feted Odissi vocalist for their invaluable contribution and lifetime dedication to the performing arts.

The Guru Kelucharan Mohapatra Yuva Pratibha Samman 2022 will be presented to Geetanjali Acharya for Odissi dance and to Matru Prasad Das for Odissi music (Vocal) acknowledging their dedication to their art forms. The artistes were aided by the skilful and distinctive light designing of Shri Debiprasad Mishra and the seamless sound engineering of Shri C. Anand Krishna.

The festival, curated, conceptualized, and designed by Guru Ratikant Mohapatra with the programme execution by Shri Debiprasad Mishra is being streamed live on Srjan’s Facebook page and YouTube channel. ShriMrutyunjayaRath and Smt. Anuja Mishra ably conducted the proceedings of the evening.

The finale features a much-awaited presentation by the Srjan ensemble. Guru RatikantMohapatra and Srjan will present the Odissi dance ballet, Ravan. Defying the popular notion of Ravana, this Odissi production presents a novel understanding of the epic Ramayana and of MahanayakaRavana.