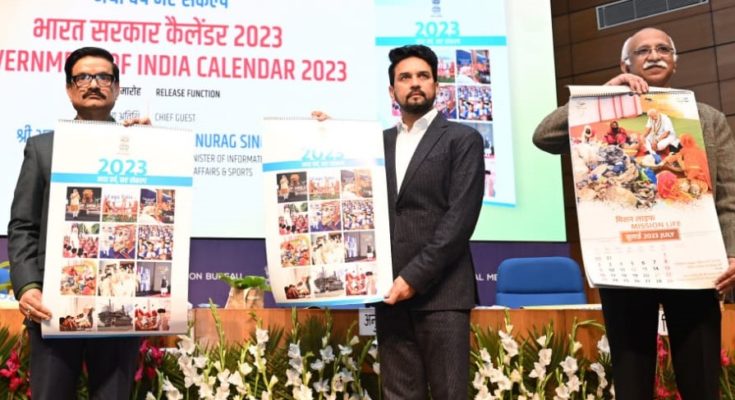 He commended the calendar for being an impressive collection of 12 images depicting a dynamically growing India. He further highlighted that the 12 themes for the 12 months are a glimpse into the strenuous efforts made by the Government towards public welfare.

The Minister recalled that the calendar is being printed in a physical form after a gap of two years when the calendar had only been brought out in a digital form. Calling it one of the best creations of Government, Shri Thakur said that the calendar, available in both digital and physical form this year, would be a dissemination medium for information about Government’s interventions and welfare measures. The delivery of this messaging, he added, is aimed to be taken to the very grassroot level by way of distributing the calendar to all the Panchayat in the country.

The Minister further informed that this edition of the calendar will showcase both the achievements of the Government so far and the commitment for future, hence the theme ‘Naya Varsh, Naye Sankalp’. It will be made available in 13 languages including Hindi and English and will be distributed across all Government offices, Panchayati Raj institutions, health centers, Navodaya and Kendriya Vidyalayas, offices of BDOs and DMs in districts and will be available for purchase by Public Sector Undertakings and autonomous institutions. A total of 11 lakh copies will be printed and 2.5 lakh copies will be distributed in regional languages to the Panchayats.

Shri Thakur also reiterated the achievements of various organs of the Ministry. Prasar Bharati has phased out all of its analog terrestrial transmitters expect 50 transmitters in strategic locations. While DD Free Dish has reached over 43 million homes by early 2022, the various channels under Prasar Bharat have reached a combined subscriber base of over 2 crores. He further said that this year the country has added 75 community radio stations to take the total to 397 in the country.

He further informed the audience that while the automation process of Central Bureau of Communication is complete, the same is underway for Registrar of Newspapers for India. The Ministry has in the past 5 years distributed 13.12 crore rupees to 290 journalists and journalists’ families under Journalist Welfare Scheme, he added.

Shri Manish Desai, Director General, Central Bureau of Communication informed the audience that the theme of the calendar ‘Naya Varsh, Naye Sankalp ‘depicts various programmes and policies of Government of India formulated as per the vision initiative and leadership of PM Shri Narendra Modi. The calendar will be distributed to central government offices across India. Alongside, the mass mailing unit of CBC has joined hands with India Post to distribute the calendar to over 2.5 lakh panchayats of India in regional languages, Shri Desai said.