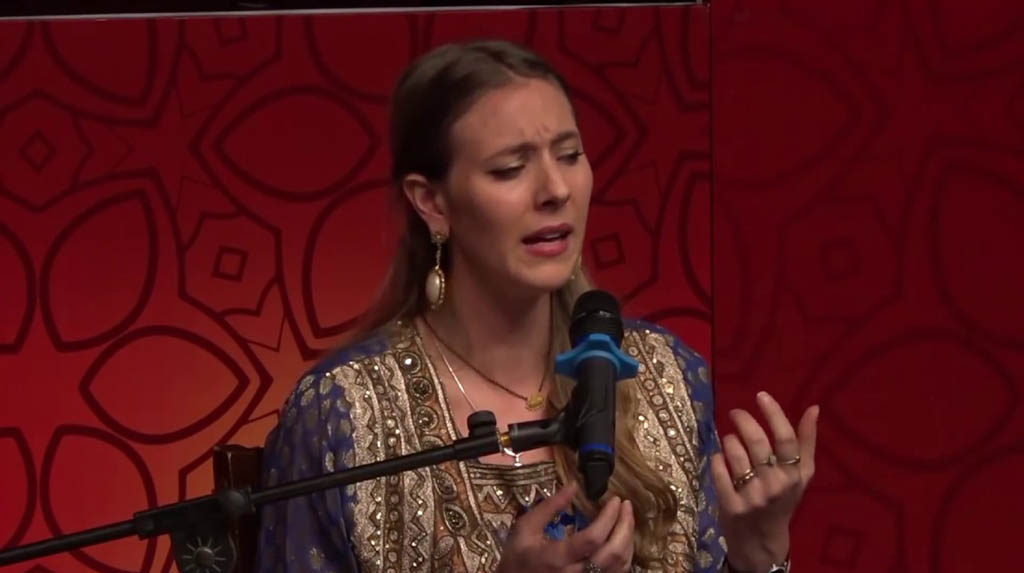 New Delhi: The brutal assault on a physiotherapy intern on a moving bus in the national capital eight years ago moved Tanya Wells to record ‘Vande Mataram’ and launched the London-born Anglo-Swiss singer on a journey that has seen her performing Urdu ghazals around the world to highly appreciative audiences.

“I had initially recorded a version of ‘Vande Mataram’ following the terrible news of Nirbhaya’s fatal assault on the bus in Delhi in 2012. I was shocked, horrified, so saddened by the plight of Nirbhaya and so many other women who suffer violence that I was moved to sing ‘Vande Mataram’ not so much that it is considered a national anthem but because it praises the Shakti, the great Mother, the eternal feminine that is made out to be the nourishing earth. I uploaded this video of my singing and playing guitar onto my YouTube channel and was later asked to do another version in 2015 for a YouTube channel in India called Being Indian,” Wells told IANS in an email interview.

The rest, as they say, is history.

It’s a journey that began in an international boarding school at the foothills of the Himalayas in Dharamsala, where spiritual leader Mataji Nirmala Devi had initiated a meditation practice called Sahaja Yoga where her parents – her mother is Swiss and her father is British – had met and subsequently got married.

“My parents were brave to grant us (my sisters and I) the opportunity for nine months of the year to study in India in order to engage fully in a culture not our own, learn Hindi amongst other mandatory subjects, practice morning meditation, express ourselves in the arts through dance and music (Indian classical) and study amongst students from all over the world. I am truly indebted to them for having had this marvelous experience at a young age,” Wells explained.

That instilled in her a love for Urdu and ghazals and through her teacher Pt Prabhakar Dhakde Guruji who lives in Nagpur was introduced to the ghazal repertoire and encouraged her to listen to many artists from the Indian subcontinent “including some of my favourites, Mehdi Hassan Saab, Ghulam Ali, Shobha Gurto, Madhurani, Lata Mangeshkar, Asha Bholse and wonderful classical vocalists whom I adore – Ustad Rashid Khan, Pt Ajoy Chakrabarty and his daughter Kaushiki Chakrabarty”.

Her flexible vocal style has given her opportunities to perform with world-renowned artistes such as sitarist Anoushka Shankar (Cannes Film Festival 2014), soul singer Joss Stone (Mama Stones 2013), and Arabic vocalist Natacha Atlas (Ronnie Scotts 2016), as well as lay down vocals for award-winning film composers such as A.R. Rahman and Nitin Sawhney.

With a double Masters (with distinction) in International Performance Research, Tanya now embraces the praxis of bringing cultures together to tell stories through the music of Seven Eyes, the band she co-founded with her husband, Brazilian guitarist Paulo Vinicius. It creates “world music,” inspired by a host of diverse cultural influences.

“We have had wonderful opportunities to perform ghazals, Sufi songs, geets and bhajan along with our own compositions to many audiences around the world, most recently in Karachi, Dubai, Toronto, São Paulo (although this concert included several Brazilian songs!), London and Geneva.

“We like to offer our audiences a mix of genres and music styles to reflect what Seven Eyes is about – a multitude of perspectives. We were planning to perform at some weddings and other events this year too but since the Covid-19 outbreak, all events have sadly been postponed,” Wells explained.

“In 2017 we had the chance to perform in New Delhi at Jashn-e-Rektha’s annual festival at the Dhyan Chand National Stadium. Earlier that year we went to Lahore to perform at the Faiz International Festival.

“That was a wonderful experience. Music can take us to meet such extraordinary places and people. The response has been positive and embracing. I think Urdu speakers are happy to see a foreigner also appreciate their rich poetry and culture,” she said.

Still, Wells is rather modest about her achievements.

“I wish I could say I have mastered Urdu but that would be untrue. I am barely touching the surface! I learn Urdu through learning the music/ composition. When I was younger at school in India I had learnt to read and write Hindi (Devanagari script) but sadly I’m unable to read Urdu… still, I have a will to learn,” she said.

“I will say that I embrace a process of learning and transforming throughout life, trying to deepen my understanding of the world and my place in it and develop a sense of meaning to life. Meaning may come by way strengthening relations with family and friends, becoming part of a nourishing community, learning, excelling at skills (like music for instance) that can bring joy or and positivity to others… In short, my life’s philosophy is about growth and nourishing oneself and others,” Wells concluded.