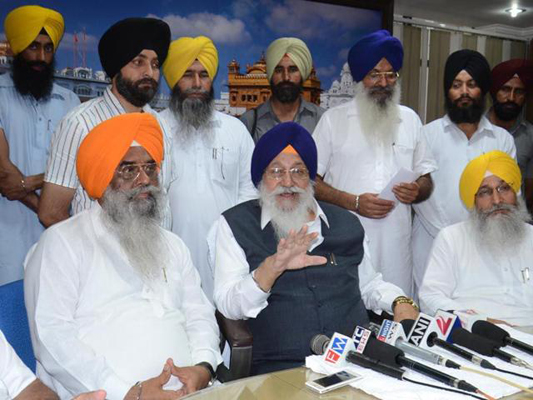 With the going on demolition in Puri,several ancient structures getting razed to earth, suspense seize the Odisha chief minister if he can spare some relics of Sikh Guru Nanak Dev in ‘mutta’ of Puri falling within the limits of danger. It has become a real puzzle for the CM, if he can side step the structure that relates with the sentiments of lakhs of people from the Sikh community all over the world.

The memorandum said the SGPC would extend all support to preserve these two mutts. The visit of the SGPC team assumed much significance as the Odisha government has decided to demolish att strictures around 75 meters from the Meghnad Prachir (wall) of the Sri Jagannath temple on security and safety of the shrine

Kahlon told newsmen here that the discussion with the Collector was fruitful. The Delhi SGPC unit sent the team to ensure preservation of these two mutts and stop their demolition.

In response to their request,the District collector assured them to preserve the temples in the mutts, gaadi and the room for mahant while the enchrochmrnt and unsafe structures would be demolished .

After witnessing the ongoing work for creation of heritage corridor and clearing of structures from close vicinity of the temple on security ground the team members welcomed it and they are satisfied with the assurance of collector.

The team thanked the media for bringing to their notice existence of two Sikh heritage in Puri. Clarifying that Udasin sect is part of Sikh faith they said Udasins believe in Guru Granth Sahib. Interestingly these two mutts do not have Guru Granth Sahib.

In Mangu mutt the marble statue of Sri Chandra the son of Guru Nanak Dev along with Patitapaban image of lord Jagannath, Sridevi and Bhudevi were worshipped while in Panjabi mutt many Hindu deities including the idol of lord Jagannath is worshipped.

Speaking to media about importance of this mutt to Sikhs Harjeet Singh Pappaji said Guru Nanak Dev conducted Arati of lord Jagannath from this mutt which was incorporated in Guru Granth Sahib and this Arati is recited in all gurudwaras across the globe.

This apart Gurudwara built at Puri was named as Gurudwara Arati Sahib ,Bhupinder Singh Bhuller, a member of the team said. The news that Mangu mutt belonging to Udasin sect relating to Sikh history was going to be demolished created wide spread resentment among the followers of Sikh panth ,Sarabjeet Singh Virk said.

Earlier, in the morning the delegation visited Mangu mutt and discussed demolition issue with Mahant Bhabanishankar Das. On the other hand it is learnt Mahant Bhabanishankar Das had requested the collector to demolish the unsafe structures of mutt complex and commercial outlets as these were forcibly occupied by goons and other influencial persons.

Baba Samsher Singh, the granthi of local Gurudwara Arati Sahib and local lawyer Biswajit Senapati were present during the meeting with the collector.