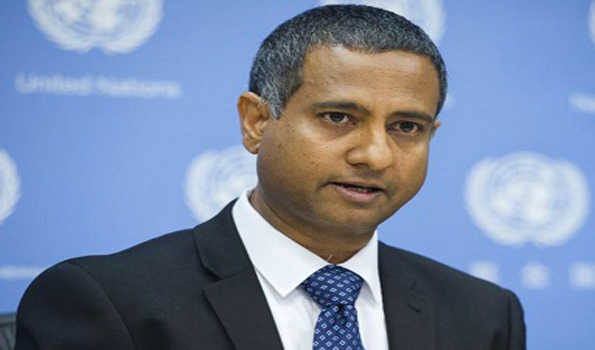 To counter anti-Semitism, which is “toxic to democracy” and poses “a threat to all societies if left unaddressed”, countries must invest more in education, the UN Special Rapporteur on freedom of religion or belief has warned, speaking at UN headquarters in New York.

Ahmed Shaheed reported his findings on the growth of the anti-Semitism to the General Assembly on Thursday, and took part in a panel discussion on the importance of education in addressing the problem on Friday.

Shaheed noted that anti-Semitism is rising amongst groups associated with both the political right and left: “I am alarmed by the growing use of anti-Semitic tropes by white supremacists, including neo-Nazis and members of radical Islamist groups, in slogans, images, stereotypes and conspiracy theories to incite and justify hostility, discrimination and violence against Jews. I am also concerned about the increasing expressions of anti-Semitism emanating from sources in the political left and about discriminatory State practices towards Jews.”

Anti-Semitism is the canary in the coalmine of global hatred Ahmed Shaheed, UN Special Rapporteur

In his report, the Special Rapporteur described the Holocaust against the Jews during the Second World War, as a graphic example of the way that religious and racial hatred can lead to genocide and the destruction of societies.

Nevertheless, an increase in anti-Semitism incidents is being reported internationally – including violence, discrimination and expressions of hostility – and the problem is being boosted by the internet, with online anti-Semitic hate speech prevalent.

In an exclusive interview with UN News, Shaheed described anti-Semitism as the “canary in the coalmine of global hatred”, which presents serious challenges to the elimination of all forms of intolerance, hatred and discrimination based on religion or belief, and poses risks to members of minorities everywhere, as well as to Jews.

In order to counter the problem,  Shaheed urged countries to invest in education and training, at all levels, to enable a better understanding of anti-Semitism: “education is a key factor in addressing issues and preventing future incidences of hate”.

Speaking on Friday’s UN panel discussion,  Shaheed insisted on the importance of engaging with the younger generation, in order to ensure that they reject anti-Semitism. A global coalition is needed, he continued, to speak out against anti-Semitism, and education is a vital tool to achieve this end.

The problem, he pointed out, is a human rights issue, that affects a whole range of rights, including the right to life. It is also widespread, coming from all sectors of society, including world leaders and Heads of State, a phenomenon Mr. Shaheed described as “very serious”.

The Special Rapporteur called for anti-Semitism to be placed within a wider human rights framework, in which citizens are empowered with the requisite critical thinking, empathy and literacy to withstand and reject extremist ideologies, including anti-Semitic propaganda.

States must also make incitement to discrimination, hostility, or violence based on religion or belief, including against Jews, illegal, added Mr Shaheed, and ensure that these laws are enforced. In addition, members of civil society have a role to play, said the UN expert, recommending inter-faith networks aimed at advancing social cohesion.

In his interview with UN News,  Shaheed said that he is heartened by the growing investment by states in tackling anti-Semitism: whilst the world has been struggling to tackle online hate, some technical solutions are emerging as potential answers, and States are now better equipped to deal with the problem.

“There is a growing recognition that hatred undermines all societies, and a growing awareness that we need to act. And this is the first towards us getting it right”.  (UNI)