Don’t ever be a whistleblower , Julian Assange dieing slowly ? 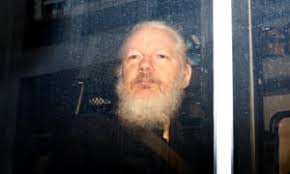 Reading what has come out in reports quoting John Shipton, father of Julian Assange, founder of the WikiLeaks, the sufferings inflicted upon Assange in a UK jail, do speak a lot as what price one gets for donning the role of a whistleblower.

Assange’s efforts through Wikileak exposing many unlawful and brutal details of US attack in 2007 in Baghdad, leading the people into the chilling incidents of the military attitudes of a nation that claims to be most civilised and developed.

That was perhaps, one of the turning points. Whether intentional or otherwise, the article read, that it was a kind of brazen ‘ sloppiness’  that the US helicopters can assail on  innocents and even their crazy intents to eliminate the wounded ones and not even sparing the injured ones trying hard to ‘crawl into safety’ an eighteen minute video that Wikileak had released  on that.

When his father, John Shipton visits him in the UK jail he was more than shocked to witness how his son undergoes an enfeebling health condition due to ‘every sort of torment’ there in the jail. His health has come to a perilous state.

Shipton wonders if his son had committed any such heinous crime by ‘revealing truths of war crime’ and being subjected to a nine-year long ‘persecution’ and every sort of torture, as quoted by Daily Mail.

Is it even prudent on the part of the jail authorities to allow the alleged tortures meted out to Assange, who protests being extradited to the US.

What the video revealed, according to the reports, bring reminisce of details of war crimes committed by the US military during the Vietnam war described in ‘The Quiet American’ by Graham Greene.

Even a human rights expert of UN Nils Melzer, who had visited Assange in the jail in last May, found that the ‘ deliberate and concerted abuse inflicted on Assange speaks on his health and life steadily. Assange’s father has fear that his son may die under those circumstances.

That is the tenet that the authorities in civilised nations like UK chose to ignore and plan to extradite Assange to US. Where does UN human rights is or is it condoning the abuses on Assange by all like US,UK and Sweden.