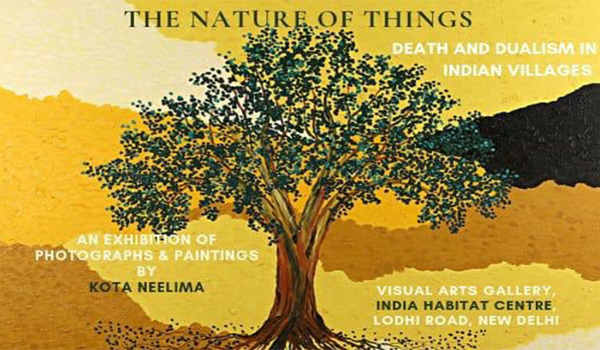 A unique art exhibition, not just showcasing the plight of widows of farmers, who committed suicide, but also giving them a flicker of hope, in the form of ways to alleviate their distress, while also tackling the ever-increasing and worrisome problem of farmers’ suicide, is on display at the national capital.

Titled ‘The Nature of Things’, the seven-day photo event, featuring the works of author and impressionist-abstract artist Kota Neelima, efficaciously captures the grief, pain and struggle of the women, who lost their poverty-stricken husbands to death chosen by themselves, in the sleepy town of Beed in Maharashtra.

Inaugurated on August 23 at Visual Art Gallery of India Habitat Centre, the exhibit features 40 pieces of works, including photographs and paintings (both oil and canvas), on theme, inspired by the Upanishads on the nature of the Self and the world, in all its incompleteness and the un-reconciled.

Speaking on the occasion, Dr Neelima, who has been working with the underprivileged and downtrodden for the past many years, said, ”I got this idea from everyday life of the common man. Whenever I read newspapers or watched a news channel, I would often wonder why the media attention is only concentrated on a select few, rather the rich and famous people, who constitute a meagre 10 per cent of the total population in India?

”Is this country only made up of a couple of famous people, who enjoy the limelight, while the rest of the population slogs it out day and night, trying to make the two ends meet? The answer is No. The country also consists of farmers, daily wage labourers, professionals, workers, students, youth and women,” she said.

”Women, especially those, whose husbands took the extreme step, to get rid of the ever-increasing debts, without even thinking once, about what will happen to their wives and families, after they are gone. ”These paintings should be seen as a symbol of acute rural distress across villages in India and not just a reflection of the struggle for survival of widows in Beed,” she said.
According to the impressionist-abstract artist, these works of art showcase how some seemingly invisible walls force these women, all farm labourers, from living a dignified life.

”When a debt-ridden farmer takes the extreme step, the first question which comes to the mind of his widow is, how will she feed her kids now. With the sole bread-earner of the family gone and the empty utensils of her kitchen staring at her, the farmer widow decides to take up farming herself. However, she does not even get to keep her earnings, which remain in the custody of a male member of the house,” Dr Neelima emphasised.

According to her, ”The patriarchal society, complete with total lack of education among the majority of rural women, makes them gullible and prey to all kinds of injustices.

”The society also snatches away their Constitutional or other rights, ranging from the peculiar ones like right to vote and ownership of land, to basics like keeping their earnings with themselves and deciding on the future course of their kids, to availing benefits of various schemes, run by the government for them. ”Poverty does not have a single approach, it is one of the many problems, which constitute the burning issues of the country, screaming for immediate attention,” she felt. Involving the women in decision-making process, will go a long way in improving their position in the society, the researcher added.

She said these organisations have a commendable track record of doing exemplary work to find solutions for rural distress among women, small farmers, labour and children, across several states in India.