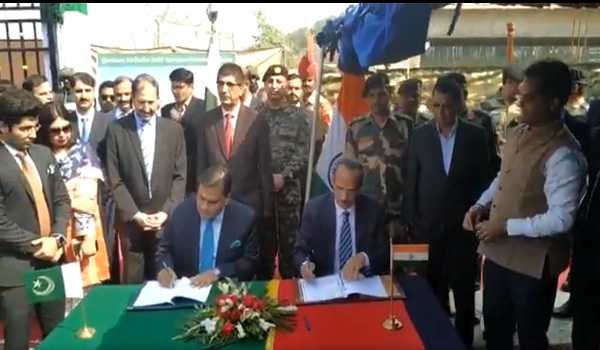 Dera Baba Nanak (Gurdaspur), Oct 24 (UNI) India and Pakistan on Thursday signed the agreement on the modalities for operationalisation of the Kartarpur Sahib Corridor at Zero Point. With the signing of the agreement, a formal framework has been laid down for its operationalisation that includes pilgrims of all faiths and persons of Indian origin using the corridor. The travel will be visa free and the pilgrims need to carry only a valid passport and the persons of Indian Origin need to carry OCI card along with the passport of their country.

Besides, the corridor will be opened from dawn to dusk. The pilgrims travelling in the morning will have to return on the same day. It will be operational throughout the year, except on notified days, to be informed in advance.As per the agreement, India will send the list of pilgrims to Pakistan 10 days ahead of travel date and the confirmation will be sent to pilgrims four days before the travel date.

The Pakistan side has assured India to make sufficient provision for ‘Langar’ and distribution of ‘Prasad’, the Home Ministry said in a statement.On November 22, 2018 the Cabinet had passed a resolution to celebrate the historic occasion of 550th Birth Anniversary of Sri Guru Nanak Dev in a grand and befitting manner across the globe.

The Cabinet also approved the building and development of the Kartarpur Sahib Corridor from Dera Baba Nanak to the International Boundary in order to facilitate pilgrims from India to visit Gurdwara Darbar Sahib Kartarpur.On levying of $20 as service charge per pilgrim per visit, India has shared its deep disappointment with Pakistan for its refusal to waive the fee.

The government would continue to urge this issue with the Pakistan government to reconsider its insistence on levying the fee.