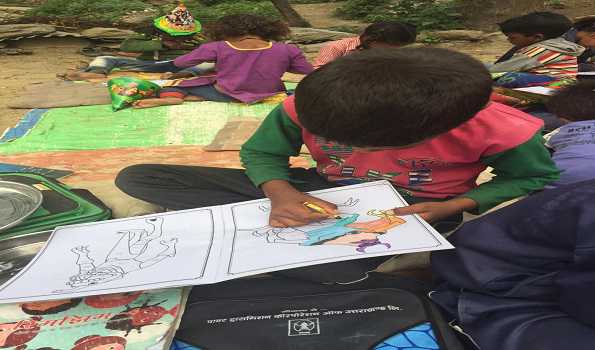 Can schools ever be imagined without a curriculum, classrooms and textbooks?

However, an atypical education institute of such sort does exist in a nondescript but beautiful village called Dewal Beeron near Agastyamuni town in Rudraprayag district of Uttarakhand.

UNI gets to know more about it as it gets in touch with Ms Anita Nautiyal, the co-founder and principal of what is called Ananda Vatika Green Gurukulam (AVGG).

“This is basically an after-school meant for primary level kids. They visit us after their regular classes and take the lead from here,” said Ms Nautiyal, adding, “As more and more kids have started falling prey to anxiety, depression and other mental illnesses, we came up with this idea of bringing them closer to mother nature and teach them via storytelling, poem recitation, murals, fine arts, dance, Yoga, singing and more.”

However, unlike in regular schools, kids here pick out their own subject or say activity.

“Given that art plays an intrinsic role in human’s lives, I feel children, too could learn a great deal from it if taught from an early age. It can do miracles in boosting a kid’s personality,” She added.

Before entering this green sphere of teaching in 2016, Ms Nautiyal served as the principal of Rishikesh International School and centre head at Ahmedabad International School in Gandhinagar, Gujarat. Does it mean that we need to switch over from regular schools to one like Green Gurukulam?

“It is up to one’s own will. By promoting Green Gurukulum, I certainly do not mean to undermine the significance of our education system,” she said, adding, “this is something that I am very passionate about and trying to do my own little bit to make this world a little better for our kids.”

Anand Vatika’s aim is to provide education beyond the school walls and ahead of the school syllabi system, which calls for fundamental positive changes in the personality of the students.

“When we had first started taking classes, we noticed that every other kid had some sort of insecurity. However, when they were introduced with dramas, poems and storytelling, we observed a huge change in them. They had started taking initiative, they were helping each other in memorising the lines and a time came when they had over come their stage-fright, speech anxiety (glossophobia) and now they seemed more confident,” she said, “and that’s what I was seeking”.

But how does this school function?

Ms Anita tells us that Green Gurukulum hires volunteers for a time-period of a month, which can extend from three-months to a year. “Those who are willing to devote their time to these children are welcome. Till now, there were three volunteers involved with the Ananda Vatika Green Gurukulum, who have been looking after a batch of 12-15 students each.

Another main objective that AVGG emphasises is to keep a check on the unwilling migration from the hilly state (locally known as ‘palayan’) in search of quality education in English language.

“If free quality education in English medium is imparted at the doorsteps of the village-parents, they will not migrate to the cities and towns and if we succeed in checking the unwilling migration, we will be able to save our villages, its culture, agriculture, horticulture, local ecology and environment. If migration is checked with these efforts, the population in the villages will also increase leading to more and more business and employment opportunities,” Ms Nautiyal added.  (UNI)