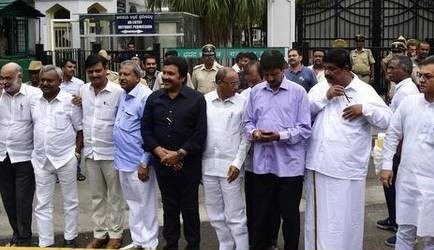 Bengaluru, Nov 13 (UNI) Disqualified Karnataka MLAs, political leaders, irrespective of their party affiliation, on Wednesday welcomed the Supreme Court verdict which disqualified the legislatures from the assembly but allowed them to contest in elections. The Apex Court judgement came on a petition filed against the then Karnataka legislative Assembly Speaker Ramesh Kumar’s decision to disqualify 17 legislatures and bar them from contesting elections till 2023.

The Indian National Congress termed the verdict as a moral victory to the party since the SC upheld the decision of the Speaker in disqualifying its 14 MLAs for violating party whip by abstaining from the House when the confidence motion was moved by the then chief minister H D Kumaraswamy and indulging in anti-party activities.

“By-election victory will prove that we were not wrong and failure on the part of the coaltion government to deliver was the main reason for our resignations,” they claimed.Speaker Ramesh Kumar, speaking to mediapersons in Kolar, said, “the Apex Court has upheld the decision on complaint filed by the Congress and JDS for disobeying the party Whip. However it has rejected the decision of banning them. Overall, I welcome the verdict. However, there should be a public debate on whether disqualified MLAs can contest in the election or not.”

As the Apex Court has allowed the disqualified to contest the elections and nominations for December 5 by-election was underway, the parties including the ruling BJP, Opposition Congress and JDS were now busy in selecting the candidates for bypolls.

The INC, which has already announced the names of the candidate for seven Assembly constituencies, will meet by evening to recommend the names for the remaining seats. While BJP, which was eagarly waiting for the SC verdict, has to select names for all the 15 constituencies. November 18 is the last date for filing the nominations.

Chief Minister B S Yediyurappa, has several times, reiterated that all the disqualified MLAs who supported the party to come to power by pulling down the 14-month-old Congress-JDS coalition government, will be given the party ticket.

Welcoming the SC’s verdict, the CM said that the party’s core committee will be meeting on Wednesday evening to take stock of the situation and select candidates for the by-election. “However, the party’s central leadership will finalise the names,” he added. Several BJP leaders have shown their discontent with the Chief Minister’s assertion as they want a ticket to contest.

Karnataka Pradesh Congress Committee (KPCC) president Dinesh Gundurao, welcoming the Apex Court decision, demanded resignation of Mr Yediyurappa claiming that the court has upheld disqualificartion. “BJP’s horse trading has been proved and hence he (Mr Yediyurappa) has no moral right to continue in the office,” he alleged.

Talking to mediapersons at Raichur, Mr Rao said, “Congress leaders would soon meet President Ram Nath Kovind and demand for dismissal of BJP government as it was proved that Yediyurappa had indulged in ‘Operation Kamal’ to pull down the Congress-JDS coalition government by luring the ruling party MLAs with power and money”.

On ticket distribution, Mr Rao commented, “the BJP, if it has any morality and respect to the democracy, should not give ticket to disqualified MLAs in the by-election and prove its majority after the election by winning on its own.”

Opposition leader Siddaramaiah, welcoming the Apex Court verdict, while speaking to mediaperons here said, “it has been proved that BJP indulged in luring the ruling party MLAs to pull down the constitutionally formed coalition government and hence the Yediyurappa government has no moral right to continue.”

Former Prime Minister and JDS supremo H D Devegowda, addressing a press conference at the party headquarters here, said that the party will soon meet to select the candidates for the by-election.Former Chief Minister and JDS leader H D Kumaraswamy has been entrusted with the task of selecting three candidates to contest in North Karnataka constituencies.