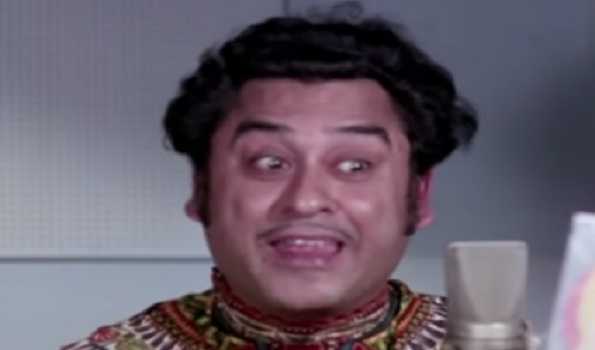 Versatile singer-lyricist-composer-director-scriptwriter-producer-actor Kishore Kumar was remembered today on his 32nd death anniversary. West Bengal Chief Minister Mamata Banerjee remembered legendary singer on the occasion. “Remembering Kishore Kumar, legendary singer, on his death anniversary,” Ms Banerjeeposted on her social networking page. Despite his untimely demise way back in 1987 on October 13, the void could not be filled in even after 32 years.

“It is just next to impossible. He would spin his own signature magic to transform a very simple track into an extraordinary number. The kind of drama and modulation he would inject into a song was simply engrossing,” raved a staunch Kishore Kumar admirer Avijit Biswas.

Kishore was the voice that sang unforgettable numbers like the joyous ‘Paanch rupaiya baara aana’, the soulful ‘Zindagi ka safar’, the romantic ‘Pal, pal dil ke pas’ and the foot tapping ‘Eena meena deeka’ that has people doing the twist even 50 years later. However, to call Kishore Kumar only a singer would be underestimating his talent. He was a multi-faceted personality who was at once a singer, actor, writer, director, producer and composer. And in all these areas he has left his unique mark.

His film career started as a comic hero with Bhagwan as his costar in films Nayi Dilli, Chalti Ka Naam Gadi and Hum Sab Ustad Hai. But he couldn’t keep his passion for singing under wrap and ultimately SD Burman (Sachin Dev Burman) explored his
talent of singing.

Kishore Kumar also sang for Dev Anand. At a time when Mohammad Rafi and Mukesh were ruling the roost, Dev Anand was one of the few actors who gave him a chance to sing for him. He sang for Dev Anand in “Guide” to great success. Kishore had a magical voice and his teaming with RD Burman touched the new heights of creativity and success. His melodious and magical voice contributed a lot in the success of famous heroes of his time; prominent among these were super star Dev Anand and Rajesh Khanna and later it was Amitabh Bachchan

Kishore was born as Abhas Kumar Ganguly on August 4, 1929. He was born in a into  the Bengali Brahmin Ganguly family in Khandwa in Madhya Pradesh . He was the youngest of four siblings, the other three being Ashok Kumar (the eldest), Sati Devi, and Anoop Kumar.