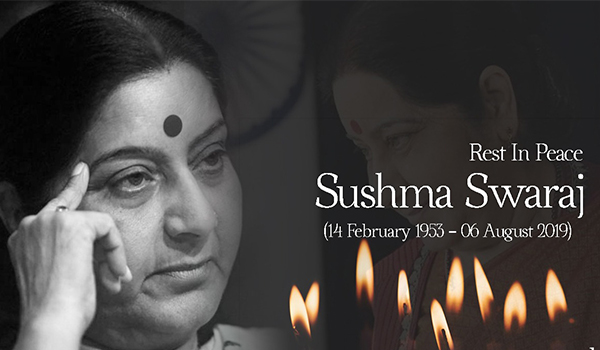 If excellence in performance , brilliant oratory skill, politics with a disarming charisma and popularity, if are any yardsticks to judge a politician,Sushma Swaraj was a persona that the entire nation was looking up at.

Right from the days of Atal Bihari Vajpayee  , Sushma Swaraj had been able to measure herself to a stature of a national leader who had once remained in common perception to become the prime minister of the country.

It is an argument that many   leaders in and outside the Bharatiya Janata Party would agree to, even in hindsight. But, that did not happen and she chose to be within the realms of probity with whatever assignment she was given.

In 2014, that seemed obvious given the pervasively political discourses of that phase which had determined the political touchstones to qualify a leader for the top posts. Now it will be futile to delve back into that at a time when she is no more.

Despite being a disciplined soldier of the saffron camp, Sushma Swaraj never steeped in the crosscurrents of radical politics and strove to emerge as a lady with a real human face and even in a diplomat-role, she demonstrated to the world in general and India in particular that, she never underestimated herself even being among the galaxy of new and old leaders. As an external affairs minister, she at times exhibited her free thinking world view and emerged one of the most revered Indian leaders in the eyes of world .

Many of her speeches are required to be preserved which were phenomenally plain, free from theatrics and fiery with facts rather than theoretical.

Sushma Swaraj was far above the calculus of the tweets to be judged, as many today do, but as a politician she played the role of an iconoclast and at the same time, had the endeavour to advocate for collectivism in politics, a practice that is on the wane today.

Her occasional satires aimed at any ideological excesses, like Atal Bihari Vajpayee used to, despite being unaccepted within but, those proved true taking her image beyond the limits of party politics.