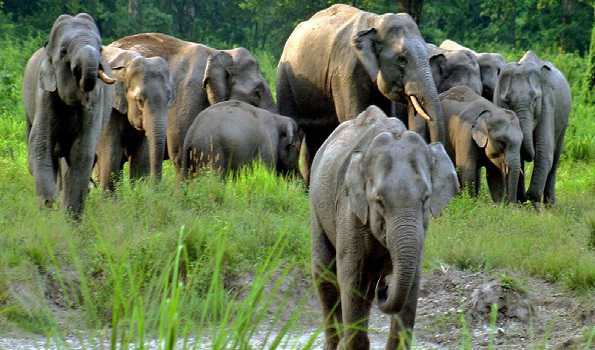 No study on such imbalance can be read in isolation. The indications are abundant to trigger the most wanting concern among the experts in the field and people in general.It is not the case of Karnataka or Kerala alone but in any state in India where habitats for elephants are under the threat of conflict now must raise the antes among all.

When the cries over climate change remains one of the most deserving engagements world over to halt further escalation of the situation, wildlife conservation must have a marked space for debate and actions.

A study has shown that human-elephant conflict has increased in the last 40 years due to deforestation, which also caused a loss of 6,761 sq km area of Western Ghats.

The study took into consideration, over 47,000 sq km across Karnataka, Tamil Nadu and Kerala, including the Bhadra Tiger Reserve at the northern most point and the Nilgiri Biosphere Reserve in the south, which hosts one of the highest densities and abundance of wild Asian elephants in the world.

The details of the study have been published in the journal Tropical Conservation Science and was conducted by Jean-Philippe Puyravaud, Sanjay Gubbi, HC Poornesha and Priya Davidar.

A statement issued here said that using maps from the 1960s and satellite imagery, the authors compared past forest cover to the recent agricultural mosaics for a period of 44 years and found a severe loss of elephant habitat.

The data showed that between 1960 and 2004, a total of 4,023 sq km of forests and 2,738 sq km of scrub amounting to 6,761 sq km of elephant habitat was lost to agriculture, infrastructure development, and other activities.

The lost elephant habitat is nearly equivalent to 10 times the current size of Bengaluru city, according to the authors.

This deforestation severed the elephant habitat link between Nilgiri Biosphere Reserve and the Bhadra Tiger Reserve, most notably in Hassan and Kodagu districts. The deforestation in these two districts mostly occurred in areas that existed in private lands, transforming the landscape.

A total of 64 people have died in Kodagu and Hassan due to elephant conflict in the last 10 years. Elephants have continued to survive in this deforested area, possibly relying only on small refugia of forests, thus leading to a situation where isolated elephant populations are struggling with the land transformation.

The elephants come in frequent contact with humans in areas, where their habitat is vanishing, and this is a recipe for disaster, warned the study, while emphasising the importance of proactively reducing deforestation, loss and fragmentation of elephant habitats to reduce the loss of human lives and livelihoods, and at the same time, stemming the negative attitudes towards wildlife.

The authors said that development can be achieved with conservation for the benefit of humans and wildlife, but it requires an optimisation of the landscape organisation by zoning of activities, which is allowing the right economic activity at the right place.

The study also found that the number of incidences was highest within four km of the protected area boundary. Hence, the idea of zonation was particularly appropriate in this case and better land-use planning, awareness, and adequate activities within this zone could help reduce the impact for both people and animals.

Citing other studies, the authors warned that the future of Asian elephants would become precarious in the coming decades, as anthropogenic global warming may destroy half of elephants range in India and hence, efforts to maintain forest cover, connectivity and ecosystem services outside the protected areas must be pursued.