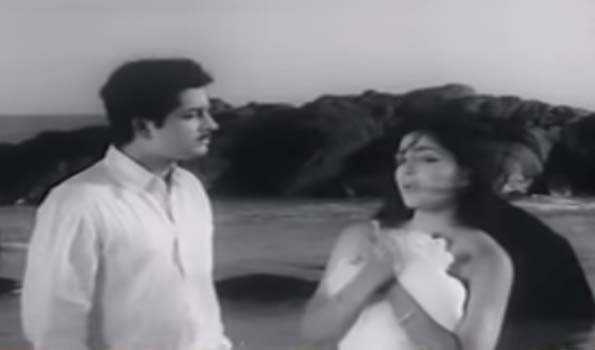 Bhargavi Nilayam, which is being regarded as one of the classic cinemas in Malayalam, is celebrating its 50th birth anniversary this year. The cinema is being considered as the first horror cinema in Malayalam. It released in 1964. Many talented fellows were worked behind its creation.

However, touch of Basheerian literature is the most significant novelty of it. Vaikom Muhammad Basheer was writing script for own story.“Neelavelicham” (blue light) was the name of the story. The same title has been given to the script also by writer himself.  Basheer had an unquenchable taste to cinema from very earlier. When he was wandering in North India, he occasionally reached in a shooting location in Kolhapur.

The location was of a Hindi cinema and director was noted film maker Santharam. Basheer directly approached Santharam for a chance to act. To a question of Santharam that which role you want? Basheer replied quickly without hesitation “of hero” Santharam laughed loudly. He didn’t grant chance to Basheer.

Instead of it, he presented him a white trouser and a cooling glass which were provided for his comedian. From the next day itself, Basheer appeared in the location with wearing this dress. Santharam was staying nearby hotel. Its owner was his fan. Hotel owner misunderstood Basheer, who is now in a comedian look, was arrived there to act.

Thus, Basheer had a luck to enjoy free food and lodging in that hotel. When shooting was over and Santharam left there, Basheer moved to another place as a wanderer. He wandered in India and abroad as soofi, palmist, pilgrim etc.

Ending world tour, Basheer has settled in Ernakulam. He opened a bookstall in Puthookaran building and camped in an up-stair room in the same building. P Baskaran, Ramukaryat, Malayattoor Ramakrishnan, Sathyan etc.. where visitors in his bookstall as well as up-stair room.

Once, Mehaboob, a noted singer at that time arrived in his bookstall demanding two rupees. His clothes were dirty. Basheer became angry over his appearance. Basheer caught his collar and drawn him into his room. Basheer cleaned his body and had given him a pair of ironed dress. His sent him back after giving 25 rupees.

When renowned actor P K Vikraman Nair died, Basheer closed his bookstall and hanged a black flag in front as a sign of honour. During this time, Basheer got a close friend. That was dramatist and writer C.J.Thomas C.J had a hidden mission for his relentless visit in Basheer’s bookstall. It was to see a girl called Rosy. She was the daughter of M.P. Paul. Later Rosy became Rosy Thomas as she married C.J. Thomas.

He had written a film script based on a work of Kainikkara Kumarapilla’s “Kalvariyile Kalppapadukam” C.J gave this script to Basheer to read. This script is being considered as the first perfect script in Malayalam language.

Till then featureless writings with dramatic concepts and outlooks were used for film shooting. The script of C.J had motivate Basheer to write such a one. He had already gone through some English books related with script writing. Next step he had taken was to write a story. He had already gone through some works of Broamstocker. Basheer resorted the same manner in which Broamstocker used to write horror stories.

After completing the story, he went into the script writing. He completed the script with taking many days. Basheer told about this script to some producers which titled as “Neelavelicham”. But producers feared to invest for such a horror film project. Finally T.K. Pareekutty, the owner of Chandrathara film distributing company, agreed to take over the project.

Basheer was introduced to Pareekutty by M.M Koya who was a tailoring shop owner. His shop was used like a hub by writers and art lovers at that time. Film makers like Ramukaryat were once spent their unemployed days in this tailoring shop.

While lying Bromstocker’s work as an inspiration in his mind, Basheer had borrowed most elements from his own other works. During the time of discussion, the title Neelavelicham was changed as Bhargavinilayam Later Basheer had penned three more scripts. Balyakalasakhi, Entuuppappakkoru Aneendarnnu, Mucheettukalikkarante Makal were that scripts.