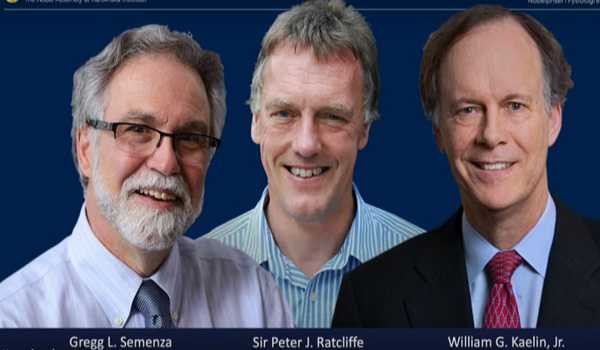 Stockholm, Oct 7 (UNI)  Will the fight against cancer be won? American scientists William G Kaelin and Gregg L Semenza and Sir Peter Ratcliffe of Britain on Monday won the 2019 Nobel Prize in physiology or medicine for their research in hypoxia-a condition in which a part of body is deprived of adequate oxygen supply at the tissue level-opening revolutionary avenues in curing cancer and anemia, besides a host of other diseases.

William Kaelin Jr at the Dana Farber Cancer Institute and Harvard University in Massachusetts;Gregg Semenza at John Hopkins University in Baltimore, Maryland; Sir Peter Ratcliffe at Oxford University and the Francis Crick Institute in London; won the award for how cells sense and adapt to oxygen availability, the Nobel committee announced at Karolinska Institute, a medical university within the Stockholm urban area of Sweden.

The three scientists discovered how cells respond to varying oxygen levels in the body, one of the most essential adaptive processes for life.Their research has given new insights into treatments for anaemia, cancer and other diseases. The discovery has already led to potential drugs that aim to treat anaemia by fooling the body into thinking it is at high altitude, making it send more oxygen-carrying red blood cells around the body. Other drugs that work on the biological process are expected to help fight cancer and treat heart disease.

In work that spanned more than two decades, the researchers studied different aspects of how cells in the body sense and then respond to low oxygen, which is crucial for converting food into useful energy. When the amount of oxygen available to cells drops, levels of a protein complex named HIF rise. This ramps up the activity of a gene used in the production of erythropoietin (EPO), a hormone that in turn boosts the creation of red blood cells.