Odissi dance, the way it is transformed and how it goes up; a critical view 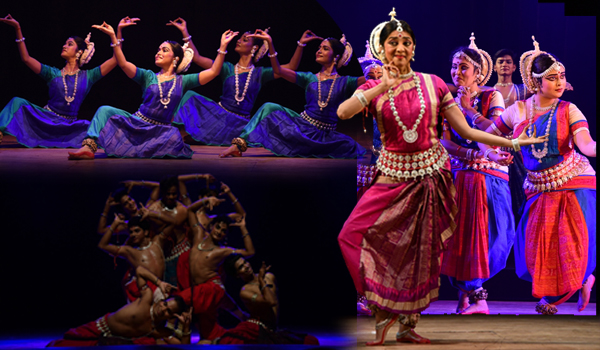 Even as confirmed traditionalists in Dance keep arguing against changes, we all realize that change as time passes on, is inevitability.  Odissi as we know it to-day acquired its classically prescribed form only in the late fifties. Over the half century that one has watched this dance acquire a presence in several parts of the world, one also has noticed changing trends creeping in – particularly during the last decade, since the last of the founding Gurus departed from the scene. Observing this aspect in the twenty-fifth Kelucharan Mohapatra awards festival which unfolded at Bhubaneswar’s  Rabindra Mandap over a week was ideal, for one was treated to Odissi groups based within Odisha – unlike other years when troupes from outside were invited to participate. It was significant that with the pre- eminent Guru’s life size portrait and panels dominating every part of available space, one became  particularly alive to how much of what he had set down still dictated Odissi, or did not.

Reminded of how the Jayantika discussions emphasized the Chauka , one could clearly see that the half seated posture with knees turned out with legs apart so that the body took almost a square posture, is now in many cases becoming an araimandi like posture of Bharatanatyam. In fact the strongly assertive square posture, with the lyrical tribhangi position as the two main stylistic concerns of the style, for this critic appeared like a constant interaction between contrasting bodily attitudes giving the dance its special flavor and to watch the Kelucharan school of Srjan too without the big plié (Half seated posture with knees bent sideways) was surprising. But one realizes as one interacts with the dancers that the square half seated posture restricts the ability for quick movement which in today’s performance spaces, becomes necessary. Also many in the past complained that such a broad plié, in course of time led to back problems. “A posture where the legs are not as close as in Bharatanatyam, but more apart – (a kumbha or pot like position) without being a square is what Odissi requires”, one of the competent dancers summed up in an interaction with this writer on this point. In the Debaprasad school the Chauka is still prevalent and this school uses a lot of bhramari, both clockwise and anti – clockwise. A point one frequently noted was how it is the rare dancer who maintains the half-seated position at the same level, while taking a circle. Generally one sees the dancer having the chauka position at start and in the end after completing the circle, with the turning movement taken by an elevated body more in the upright position.

The delightful isolated torso movements are not as prolific as in late Guru Kelucharan’s own choreography. He was a master in the use of delicate torso deflections. As for the Debaprasad school which has never specialized in these movements, there are dancers like Rahul Acharya who have incorporated torso movements into their dance vocabulary.

One doubts if during the time of these Gurus any disciple would have changed choreography taught by the Guru. But to-day one finds some adaptations and little changes to suit the circumstances in which the particular item is being rendered. For instance Gunjan Dance Academy led by Guru Kelucharan Mohapatra’s  discipleMeera Das used the main choreographic aspects of the Guru’s Dashavatar composition, along with her own changes – and one must admit that the aesthetics of presentation was always kept in mind.

The entry of a significant number of male dancers in what was considered as designed mainly with the female form in view, (even Guru Kelucharan was deeply swayed by the Surasundaris carved on Odishan temple walls), has introduced more than just a new energy into the dance, though the Debaprasad school attracted male dancers right from the start because of its tandava appeal. So it was not surprising to find male students in the groups of Nrutyayan under Durgacharan Ranbir, Nupur under Niranjan Rout, Pitambar Biswal’s group Suravi,and Gajendra Panda’s group Tridhara which are all from the Debaprasad School. Speed and prolonged nritta sequences have become the norm and this is also due to percussion masters like Dhaneswar Swain and Sachidananda Das who are in great demand for their ability to compose rhythmic sequences.As a percussion instrument, the mardala has evolved a great deal, from the time when barring Guru Kelucharan Mohapatra  who had magic fingers playing the mardala, this department was still in its fledgling stages. Rhythmic virtuosity is now rejoiced in and the Utkal Sangeet Mahavidyalaya has trained from Late Guru Banamali Maharana  to his disciples a line of fine percussionists. And male dancers delight in this. 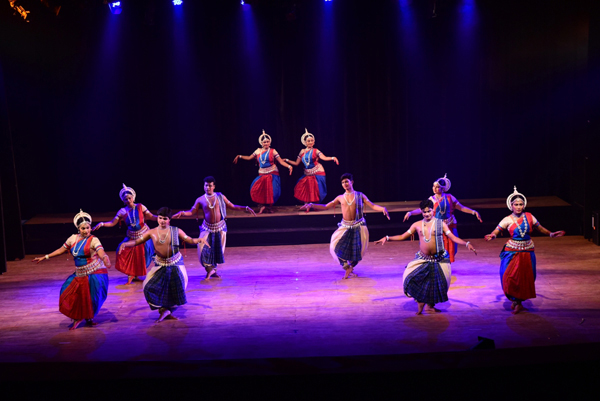 But above all this, a teacher like Bichitrananda Swain, who started as a Gotipua and graduated to Odissi for which he was trained under Gurus like Gangadhar Pradhan and even Kelucharan Mohapatra, has consciously worked on Odissi for the male body and his institution Rudrakshya Foundation has the best of male talent. Here are truly genderless dance bodies as ideal vehicles for the dance, able to take on and project the best of male vibrancy or female sensuality in Odissi movement. Trained to the hilt, these male dancers have become sensations on foreign tours. Some of the best torso deflections were seen in the movement technique of these dancers. And the art of using pure movement without the literary content, is very common to-day – and not only in the Pallavi. And the Rudrakshya dancers seem to have a feel for the mood behind pure rhythm. Every single group, even one like SoorMandir led by Guru Kelucharan’s disciple Jyotsna Rani Sahoo , sports male Odissi dancers. If male Odissi dancers even under male gurus were not too many in the past, to see a female teacher with male students, represents a sea change.But the  strange aspect of what people saw as a dance form for female centric expression, when a Guru like Kelucharan in front of them was the greatest exponent of the form, has never been understood. So the lalitya one speaks of as the main identity of Odissi can be upheld even by the male dancer!

Speed (which even KelucharanMohapatra brought in towards the closing parts of a recital, has now become a means of thrilling the audience. And when resorted to right from the start of an item, the hand movements, which in Odissi trace curves in the air rather than straight or diagonal lines as in Bharatanatyam, tend to become straighter losing their curves.

What was a solo dance form has now embraced ensemble dancing to a very large extent, thanks to our large stages. A solo on the Konark festival space would not register. Every institution has a Repertory where dancers perform as a group. And one must admit that groups in Odissi are slick and disciplinedthe togetherness in performing making for handsome formations. But the preference is still for what the Modern Dancer would call ‘pretty’ looking group formations, with an accent on symmetry. Going away from this into aesthetics ofasymmetry is very rare.

Experiments have become the order of the day and every institution is trying out new work – some successfully and others less so. A small number of research workers, script writers, music scorers and percussion experts have beenlocated and they form an inevitable component of all new work. While it is commendable that all aspects of a new production are being considered, having the same set of experts, no matter how talented, leads to a sameness of ideas and approach – in a sense taking away from the freshness which should set apart a new work. For example Dhaneswar Swain (who is a fine mardala expert) contributed the rhythm component for seven of the ten productions featured!

From biographies to social issues to historical figures – themes are countless. But in the desire to connect with the contemporary situation, one cannot be unmindful of the suitability of the adaptation of the theme for Odissi. Creative imagination can do it as one saw in the ‘Make in Odisha’ production (not part of this festival). But these must be treated as exceptional instances where Odissi is pitted with other non classical forms of the region. The work on ‘Ahimsa’ based on Gandhi by Orissa Dance Academy was one of the creations where intelligent choreography and script (restricting the work to the movements set in motion by the Mahatma, with his persona minimally reflected  in the determined walk with the stick occasionally flashing across the stage) made for excellent  viewing. The other work one found very satisfying was ‘Jagannatha Gopinatha’ presented by Durga Charan Ranbir’s Nrutyayan. While some found the Jagannath/Krishna Gopinath comparison somewhat confusing the manner of its treatment was good. And poetic references with “Ahe neela Saila prabala matta barana” playing as music while Krishna and Radha were on the Jhoola , comparing the ecstatic mad elephant like swing of Jagannatha during Pahandi bije,  with Krishna’s Jhoola were  very subtle. 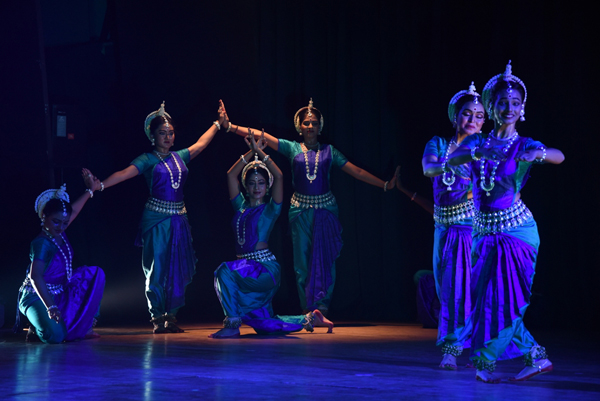 For ensemble togetherness, and neat and aesthetic costuming, Srjan was hard to beat, though I would have planned the music differently, so as to allow for more stark tempo variations, to being out the changes between the freshness and impetuosity of descending Ganga, controlled in the matted locks of Shiva, and her lethargic heavy footed flow after all the impurities she is subjected to. Unlike some other groups, the ensemble remains knitted all the time.

Simple but away from the usual, Ileana Citaristi’s young students of Art Vision presenting Akshara, was well done and Lakshmikant Palit’s music in this instance was very suitable.

Music for me is a very important factor. And here I must admit that in all the latest scores I have heard,languages like Hindi are accommodated with great punditry and virtuosity. But that utter sweetness of Balakrushna Das’ or Bhubaneswar Mishra’s music, which makes my insides melt every time I hear it, is missing in to-day’s music. To me it seems that in the course of being influenced by all the contemporary trends, and the desire to embrace the classical nomenclature, we have become more grand and spectacular – but lost that something which spoke straight to the listener’s heart. For me that is a part of Odissi which needs to be preserved. Forget arguments about classical and not classical. Retain your identity.