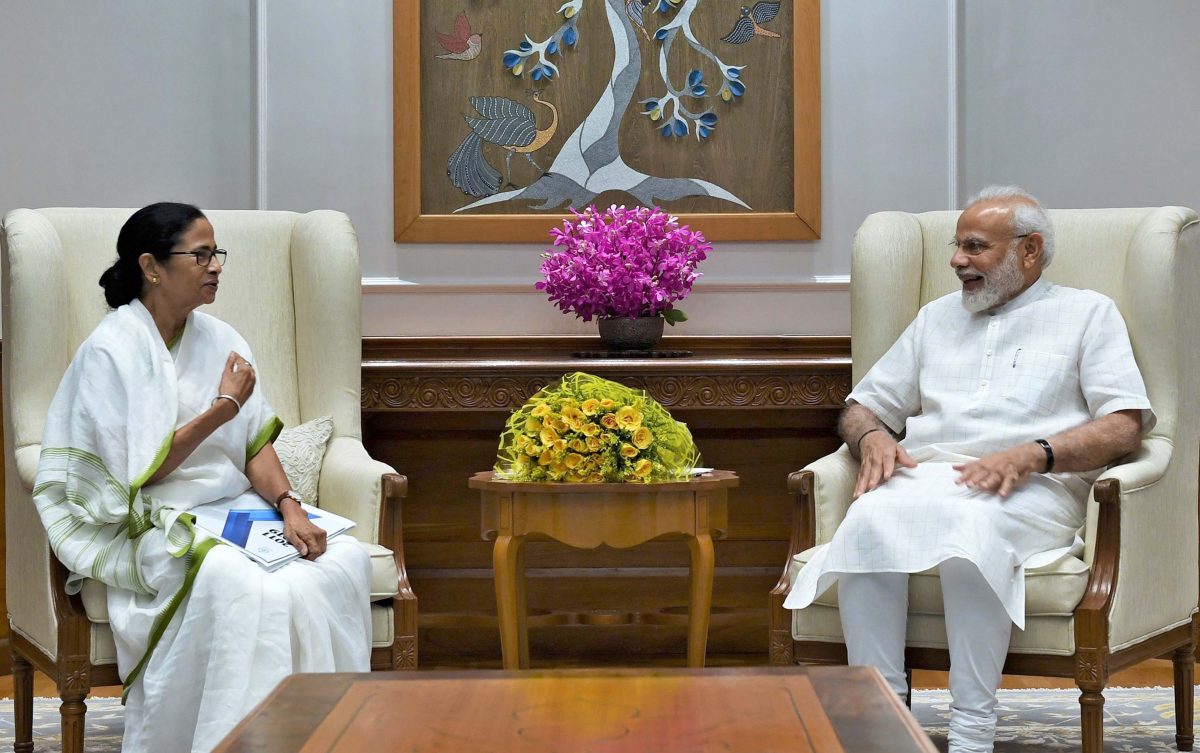 New Delhi, Sep 18 (UNI) West Bengal Chief Minister and Trinamool Congress supremo Mamata Banerjee on Wednesday called on Prime Minister Narendra Modi here and  pressed for immediate steps to change the name of the state. Ms Banerjee, who has been a bitter critic of Mr Modi and BJP president Amit Shah, said she is keen to meet the Union Home Minister as well. ”If I get time, I will meet Mr Shah tomorrow,” she said and maintained the Home Minister is in Jharkhand.

Brushing aside their bitter political differences, the Chief Minister took a rather surprising stance and invited the Prime Minister to attend a coal bloc function in Birbhum district. The project is worth Rs 12,000 crore. ”This coal bloc will give jobs to many people,” she remarked. The Trinamool Congress chief said the meeting with the Prime Minister – first time since May 2018 – was good and ”it was a meeting between two governments”, implying not much political message should be drawn from the interaction.

”The Prime Minister told me after Durga puja, he may finalise the date for coal bloc function at Deocha Pachami,’ which will be world’s second largest coal bloc,” she said. Earlier, no sooner the meeting began at 7 Lok Kalyan Marg, the PMO tweeted about the meeting with snaps of both the leaders exchanging pleasantries. Incidentally, the meeting between PM Modi and Ms Banerjee came at a time when the Saradha chit fund probe case has taken an interesting turn with a number of Trinamool Congress leaders and onetime Ms Banerjee’s trusted aide and former Kolkata police commissioner Rajeev Kumar falling under the scanner of ongoing probe

However, Trinamool sources said there was no time to talk about matters relating to the functioning of central agencies including CBI – which is probing the Saradha Chit fund case. Prior to her meeting with the Prime Minister, the Trinamool Chief tweeted to congratulate state officials for their good work and helping the state bag the prestigious Krishi Karman award from Government of India for 2017-18 for maize production.

The meeting between Mr Modi and Ms Banerjee took place triggering much speculation politically as the Chief Minister  had stayed away from the swearing-in ceremony of PM Modi and his cabinet on May 30. Trinamool Congress supremo had also stayed away from NITI Aayog meeting on June 15 saying attending such conferences would be “fruitless”.

This year’s Lok Sabha polls saw fiercest contest between Trinamool Congress and BJP and much to the chagrin of Ms Banerjee, the saffron party has managed to win as many as 18 parliamentary seats from the state where it did not have much organisational presence. Responding to birthday wishes from Mamata Banerjee on Tuesday, Prime Minister has tweeted: “Thank you so much Mamata Didi”. He also hastened to add one line in Bangla – “Mamata Didi, apnar shubhechha-r janya dhanyavad”.