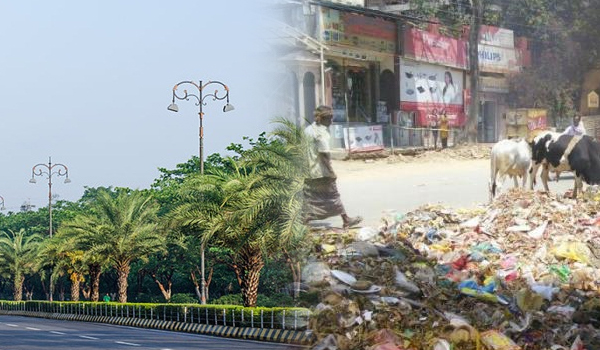 A drive through the capital city Bhubaneswar can expose the dark underbelly.  Air pollution is distinctly visible to eyes. The entire city remains enveloped by a hazy horizon from morning to noon, and sometimes the day long .

Breathing gets heavy to heavier and as we enter into the threshold of November  even, there is no sign of winter here.

Autumn has slipped sometime in between the gaps and that is the reality in a city like Bhubaneswar for long, where there are only two seasons, a predominating summer lasting over nine months and a passive winter with its occasional cordial teasing through drops in temperature .

Air pollution index has crossed 47.92 which is, of course,  not the most up to date data and according to the WHO yardstick it is on the higher side in Bhubaneswar.

In many areas people, even morning walkers can be seen using masks and as day matures, the heaviness in the air grows further irritating coupled by a humidity level crossing 60 % plus.

On the other side, the air quality gets seriously affected by a 69% plus dissatisfaction in garbage disposal in the city. Here and there, the heaps of garbage are all pervasive and there are en number of garbage bins in many parts of the city those suffer from spillage in the absence of an intermittent clearing of the garbage. The stink from such bins gets worse and become potentially hazardous by the evenings and  mornings.

Respite from the noise and light pollution is on the decline thus impairing a comfortable spend time in this city whether in the morning or evening.  It ( discomfort level) remains more than 62% which is by any yardstick quite high for a Smart city like Bhubaneswar.

Although a figure shows the dissatisfaction level among people at a low but an interactive exercise reveal that, more than 60 % people are forced to be indoors due to the pollution in the air, sound and lights.

But, here the administration, in whatsoever form, has so far not woken up the increasing menace day by day. Nor, so far, the political community has woken up to this reality that soon may be grim.

But, there at the national level politics over what pollutes Delhi or UP or who is responsible for it has become the topic for the present. There are raging debates in the national channels over last two days painting the whole issue in a kind of ‘Tutu-mein-mein’ colour between APP and the BJP.

Now, the chief minister of Uttar Pradesh Adityanath Yogi has sounded a warning for violators of pollution norms in his state. And, interestingly, this comes after he lighted 5. 5 lakh lamps during the Diwali unmindful of the emission from that questionable extravaganza that evening.