Watch out for water the WIO way, a pitch for youth to battle against water crisis 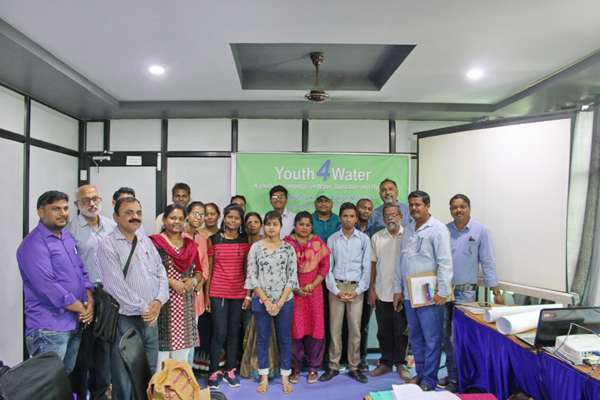 Imagine a day without water! It can be perplexing and worse. With the spectre of climate change giving a cold stair at all of us, what is heartening that the generation that is going to get the globe away from the imminent disaster now rise to the occasion.

At a time when in several parts of the planet do singe in the darkness of an alien climate, there is a silver line when youths are bracing up not only to face the ominous times ahead but are trying to create an awareness against the threats from the climate change.

Nothing could have a better initiative by the youngsters of Sambalpur and around, to wage a war against the climatic disorder in a place, in Western Odisha, which is suffering from the menace of a cyclic drought and other deviations.

Charity begins at home and many of us would have seen how people leave water down the drain even while washing the face in the mornings. The water tap of the wash basin is normally kept open till the end of the last act.

So also the waste of water while a maid clean the utensils with the water tap keep gurgling till the last piece! Perhaps, crores of litres of water vanish for nothing. That is just tip of an iceberg !

The Water Initiative Odisha(WIO), an organisation which has been relentlessly creating an awareness about water, its conservation and other major initiatives to safeguard the world from being dry, has now struck the right chord by taking the initiative to the younger generation, which has shown the ready wit and response to carry on the initiatives with remarkable zeal.

Ranjan Panda, a man who rarely needs an introduction, while speaking about water conservation, has, in fact, set the ball rolling.

Concerned about the water scarcity and sanitation challenges that the state faces, and knowing well that climate change is already aggravating the problem, an inception meeting of the ‘Youth for Water’ campaign was organised here on Sunday under the leadership of Odisha’s Water Man Ranjan Panda in order to involve youth in chalking out strategies to address these critical issues. People from across the state, mainly youths and their mentors from five districts, attended the meeting organised by Water Initiatives Odisha (WIO), a consortium of civil society organisations and concerned citizens, local youth-based NGO Patang and Unicef, Bhubaneswar office.

As a great step forward it was decided to reach out to and mobilise at least a thousand young people initially from various colleges, universities and associations on water, sanitation, hygiene (including menstrual) (WASH), rivers, environment and climate change issues for bringing positive change in their behaviour and organising common action initiatives.

‘Waterman Ranjan Panda’ , convenor of the WIO, said, “Our objective is to build relationship between youth and water in ways that will help them understand the importance of water resources including rivers and other surface waterbodies, groundwater and the entire ecology that will help them work towards conserving these resources so that they can ensure a water-secured future for themselves. We as mentors will assist them in achieving this goal.”

“In the coming 10 months, we will be focusing more on activities related to WASH. Today we have decided to identify and build capacities of select young people to be “Safe Water/WASH” ambassadors in their daily lives so that they can be the change makers and mobilise their families, neighbourhoods and institutions in joining the efforts. We have also decided to engage these young people in online and offline activities for campaigning on water and related issues, Panda added further.

“We will be expanding the scope of this campaign and seeking collaboration of other institutions to be able to reach out to all the youth of the state gradually,” he pointed out.

What can be better than the educational institutions as the platforms from where the posterity can beep the torch of warning for the people of the State and India that, ‘ hey! get your acts together or the perils of water shortage is just looming over. Within the next 10 months, specific activities will be organised in 10 colleges/localities spanning five districts – Bargarh, Mayurbhanj, Nuapada, Puri and Sambalpur – and will spread to other districts gradually. In the meeting, the volunteers chalked out plans to involve youth through various actions both in their institutions and communities. ‘Youth for Water Club’ will be started in such institutions/places to engage the local youth through innovative actions throughout the year.

It may be noted here that the idea of ‘Youth for Water’ campaign was conceived during the 3rd Odisha River Conference, organised by WIO and 35 partner organisations, at Baripada on 24th-25th March this year. Youth representatives from across the state took part in the Youth Conclave as part of the conference and raised concerns regarding the increasing water crisis and the growing detachment of youth from important ecological elements like rivers and forests.  .

WIO has appealed all sections of the society to join this unique initiative and help youths accomplish their goal of a water secured future.