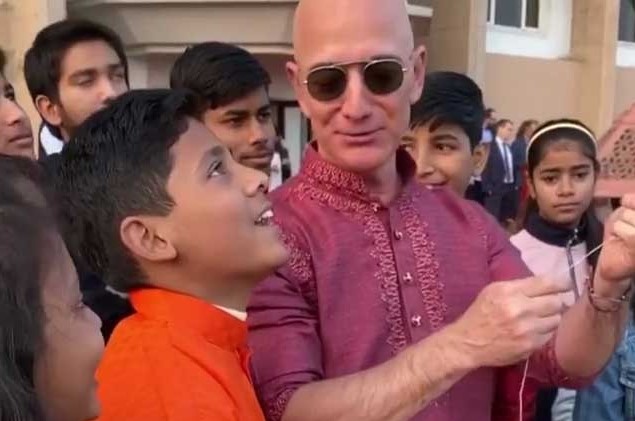 New Delhi: Amazon Founder and CEO Jeff Bezos on Friday posted a note on the company’s e-commerce website Amazon India, saying “he falls in love with India every time he returns here”, a day after Commerce and Industry Minister Piyush Goyal snubbed him during a public event.

“I fall in love with India every time I return here. The boundless energy, innovation and grit of the Indian people always inspire me,” Bezos wrote in the letter while mentioning Amazon’s investment in the Indian economy and that the firm is aiming to create 10 lakh new jobs by 2025.

Those visiting the website for the first time on Friday — January 17 — are likely to be greeted with a full page letter by Bezos that is meant for its customers, sellers and partners.

Bezos, in the letter, adds how more than 550,000 small and medium businesses (SMBs) in India are using Amazon as a platform to offer millions of products.

The new expected jobs are on top of the 700,000 jobs Amazon has already created in the country since 2013, the company said in a statement.

The job announcement came after Prime Minister Narendra Modi gave a cold shoulder to the world’s richest man who has an estimated net worth of $117 billion, by not meeting him.

On Thursday, Goyal not only ticked off Bezos saying that they are not doing India a favour by investing a billion dollars, but also raised concerns if its losses were a result of predatory pricing and if Amazon and Flipkart were gaining entry into multi-brand retail by using loopholes.

More importantly, alluding to the $1 billion investment announced by Bezos in India, Goyal had a different take.