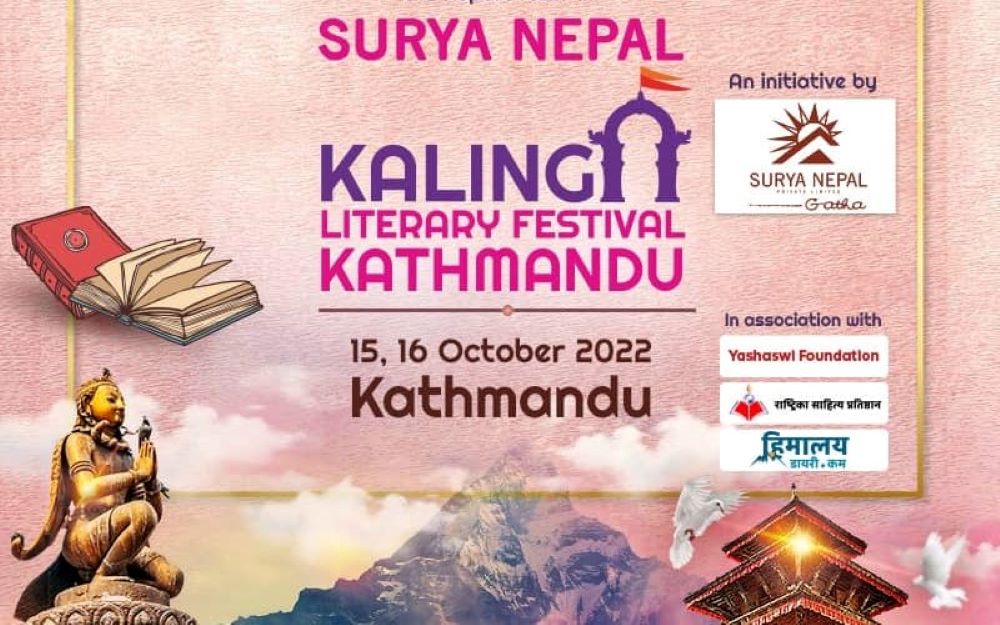 Nayan Raje Pandey, Dr. Gyanu Pandey, Tirtha Shrestha and over 150 writers are joining the festival as speakers in this two days extravanza.

“Kalinga Literary Festival Kathmandu will showcase literature, music, dance, poetry and other art forms. It will be a lifetime experience for the lovers of literature, Music, Dance, art, poetry. The festival will celebrate the long-standing ties between Nepal and India in the context of the emerging global cultures,” said KLF Founder and Director, Rashmi Ranjan Parida.

“We plan to celebrate great Literary, Spiritual, Cultural Traditions of Nepal, among other aspects, theme of Shiv and Buddha Tatwa and its contribution to South Asia and global literary movements and traditions. The festival will have panel discussions on literature, Art, Culture, History, and showcase artistic traditions from Nepal and India, in addition to the world of Nepalese and Indian art and music,” said Ranjana Niraula, KLF-Kathmandu, Director and Co-Ordinator.

Central Theme of the Festival will be “India & Nepal: Journey of Civilizations and Search for the Soul”.

· Panel Discussion on thousands of years old civilizational dialogue between Nepal and India.

· Pashupatinath to Puri, Kashi to Kathmandu, Bodhgaya to Bodhnath, From Lumbini to Lal Ded and other such interconnections

· The Love and Protest, the flower and fire in Tulsi Das and Meera Bai’s poems

· The Enchanting Flute, crazy and curious love in Vaishnava songs

· Classical and contemporary, the fusion and the confusion

THE FESTIVAL IN NUMBERS

Over 50 International and National Award winners to represent

New Book to be Launched

This is perhaps the first time in history that literature, culture, art, history will come together to connect the regions of Nepal with those of India. The festival will focus on Spirituality, Art, culture, Shiv Tatwa, Ram Katha, Buddha, Promotion of Nepal and India historical relationship (Pashupatinath to Puri, Kashi to Kathmandu, Bodhgaya to Bodhnath, From Lumbini to Lal Ded and other fruitful ties that have existed for many epochs. These are the mainstream and the marginalized cultures of two vibrant nations on the march. Over 30 Noted writers and cultural figures from India Like to join the KLF Kathmandu. 70 percent speakers will join from host country Nepal in the festival every year.

Annual Kalinga Literary Festival celebrate the creative spirit of India and commemorate the literary diversity it offers, bringing it in conversation with the best minds in the world of literature within and outside of Odisha and India. Academics, authors, political and social activists, law makers, government officials, corporate leaders, students and people from all walks of life immerse in the vibrant atmosphere of the festival and exchange opinions on their favourite authors and works.

Mystic Kalinga Festival has emerged as an Annual Flagship event in the cultural calendar of India and our focus is to rekindle the romance with literature and foster reading and writing habits, especially among the youth. It offers a national platform with a global appeal and bridges the gap between literature in English and other Indian regional languages.

Authors, academics, policymakers, literary cultural, political and social activists, lawmakers, government officials, corporate leaders, spiritual thinkers, students and people from all walks of life immerse in the vibrant atmosphere of the festival and exchange opinions on their favourite authors and works. Kandhamal Literary Festival is a unique initiative from KLF for mainstreaming tribal literature—and thus expanding its reach and fame across the world. It is well-celebrated for keeping a democratic feature never seen earlier with any other literary festivals, at the grassroot, it is making desirable changes through positive creative interventions.

As the world gripped through the unprecedented crisis with an outbreak of Covid-19 pandemic in 2020, the most severe operational disruptions made it impossible to organise the literary festival physically. In such a testing phase, KLF started a virtual talk series “Bhava Samvad”. KLF Bhava Samvad through about 350-sessions so far, has hosted the most illustrious writers, policymakers, socio-cultural influencers and best creative minds to keep the culture of idea-exchanges fostering. As widely recognised and reported, KLF Bhava Samvad is undoubtedly the most impactful and engaging virtual literary idea platform in India.

KLF Book Awards, established by KLF in 2021 opens up the opportunities to identify, recognise, acknowledge, encourage and honour the literary talents across genres, for both established and new writers. The objective has been to shape the future literary icons.