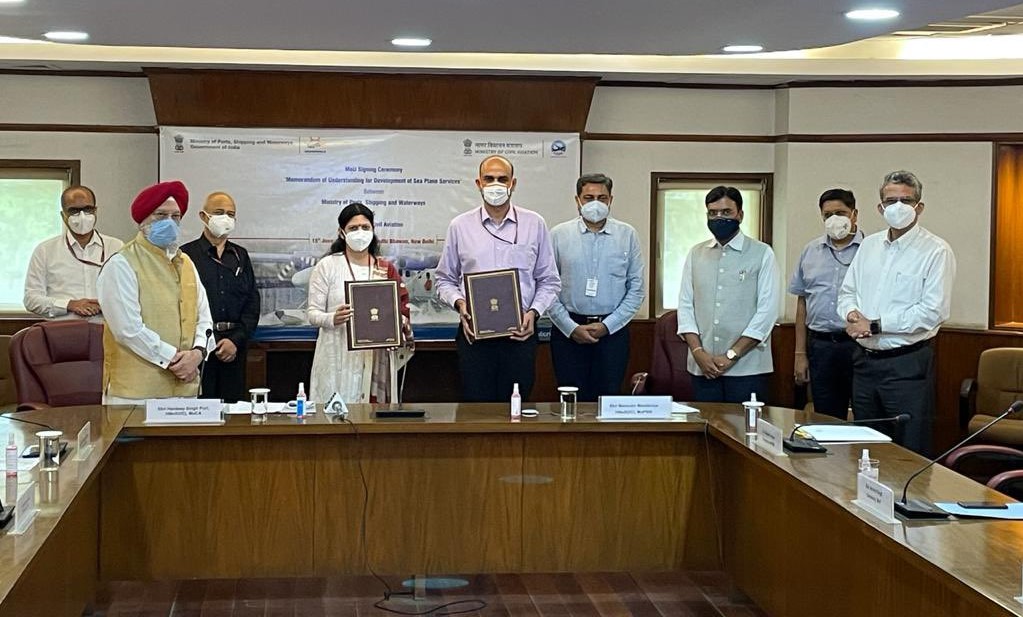 New Delhi, A Memorandum of Understanding (MoU) between the Ministry of Ports, Shipping and Waterways, Government of India and Ministry of Civil Aviation, Government of India for development of Sea Plane services in India was signed today.  Ministry of Ports, Shipping and Waterways, Mansukh Mandaviya and Minister of Civil Aviation Hardeep Singh Puri were present during the MoU signing ceremony held here today.

Signing of this MoU is a major milestone for making seaplanes project a reality very soon. This MoU envisages development of Non Scheduled and Scheduled operation of seaplane services within territorial jurisdiction of India under RCS-UDAN scheme of government of India. As per MoU, a Co-ordination Committee with officials of Ministry of Civil Aviation (MoCA), Ministry of Ports, Shipping and Waterways (MoPSW) and Ministry of Tourism (MoT) is to be set up for timely completion of operationalisation of Seaplane services at various locations. MoCA, MoPSW, SDCL will consider operationalising of Seaplane operating routes as identified and suggested by all agencies.

MoPSW would identify and develop water front infrastructure of Aerodromes’ locations and obtain required statutory clearances and approvals in coordination with MoCA, DGCA and AAI by defining the timelines for all activities involved in the development of facilities for starting seaplanes operations.

MoCA would carry out bidding and select potential airlines operators based on their commercial consideration through bidding process, incorporate the locations/routes as identified by MoPSW & routes identified through bidding process in UDAN scheme document. MoCA is also obliged to provide funds and financial support in respect of water aerodromes awarded under RCS-UDAN scheme and coordinate with Chief Secretaries of all States for the Seaplanes operations.

On the occasion, Hardeep S Puri, Minister of State(IC) for Civil Aviation stated that this MoU between the two Ministries will help in expediting the development of new water aerodromes and also operationalization of new seaplane routes in India. He further stated that this will give a big fillip to the provision of a new kind of tourism service in India.

Speaking on this occasion, the Minister of State (I/C) Ministry of Ports, Shipping and Waterways, Mansukh Mandaviya stated that signing of this MoU will be a game changer both for Indian Maritime and Civil Aviation sector as it will not only enhance seamless connectivity across the nation by promoting eco-friendly transportation through Seaplanes but also give a boost to the tourism industry”.