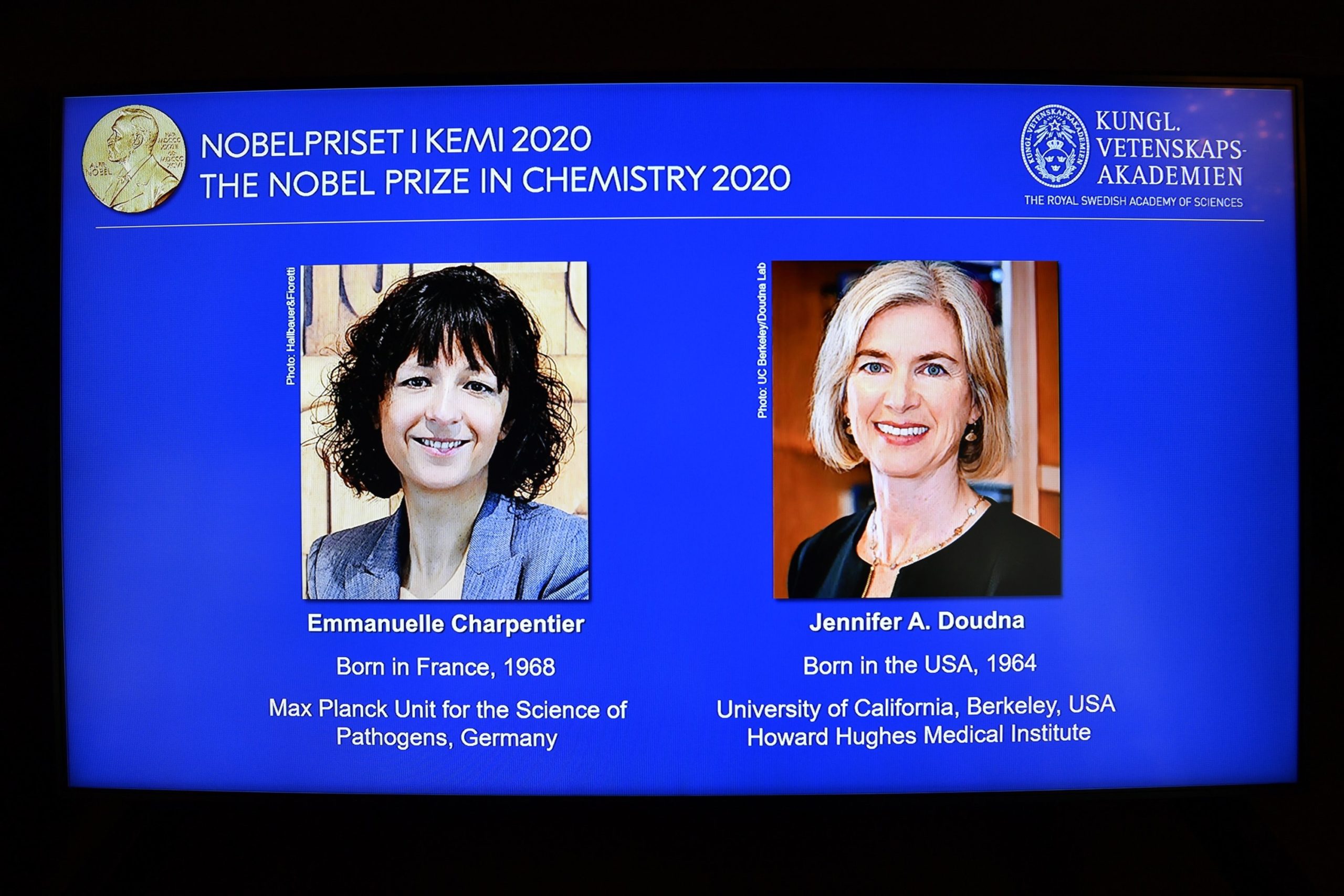 Stockholm: In a historic moment, two women scientists have been awarded the 2020 Nobel Prize in Chemistry for developing the tools to edit DNA, the Royal Swedish Academy of Sciences announced on Wednesday.

Professor Emmanuelle Charpentier and US biochemist Jennifer Doudna are the first women to share the prize (first time without a male collaborator) for their discovery known as Crispr-Cas9 genetic scissors.

“I wish that this will provide a positive message specifically for young girls who would like to follow the path of science… and to show them that women in science can also have an impact with the research they are performing,” said Charpentier.

“This is not just for women, but we see a clear lack of interest in following a scientific path, which is very worrying”.

Researchers need to modify genes in cells if they are to find out about life’s inner workings. This used to be time-consuming, difficult and sometimes impossible work. Using the CRISPR/Cas9 genetic scissors, it is now possible to change the code of life over the course of a few weeks.

“There is enormous power in this genetic tool, which affects us all. It has not only revolutionised basic science, but also resulted in innovative crops and will lead to ground-breaking new medical treatments,” said Claes Gustafsson, chair of the Nobel Committee for Chemistry.

Using the CRISPR/Cas9 genetic scissors, researchers can change the DNA of animals, plants and microorganisms with extremely high precision.

This technology has had a revolutionary impact on the life sciences, is contributing to new cancer therapies and may make the dream of curing inherited diseases come true.

This technology has revolutionised the molecular life sciences, brought new opportunities for plant breeding, is contributing to innovative cancer therapies and may make the dream of curing inherited diseases come true.

When Charpentier from the Max Planck Unit for the Science of Pathogens in Berlin and Doudna from the University of California-Berkeley, started investigating the immune system of a Streptococcus bacterium, one idea was that they could perhaps develop a new form of antibiotic.

Instead, they discovered a molecular tool that can be used to make precise incisions in genetic material, making it possible to easily change the code of life.

Just eight years after their discovery, these genetic scissors have reshaped the life sciences.

“Biochemists and cell biologists can now easily investigate the functions of different genes and their possible role in the progression of disease”.

In plant breeding, researchers can give plants specific characteristics, such as the ability to withstand drought in a warmer climate.

In medicine, this gene editor is contributing to new cancer therapies and the first studies attempting to cure inherited diseases.

“There are almost endless examples of how CRISPR-Cas9 could be used, which also include unethical applications. As with all powerful technology, these genetic scissors need to be regulated,” said the Royal Swedish Academy of Sciences.

Charpentier published her discovery in 2011. The same year, she initiated a collaboration with Doudna, an experienced biochemist with vast knowledge of RNA.

Together, they succeeded in recreating the bacteria’s genetic scissors in a test tube and simplifying the scissors’ molecular components so they were easier to use.

In an epoch-making experiment, they then reprogrammed the genetic scissors.

In their natural form, the scissors recognise DNA from viruses, but Charpentier and Doudna proved that they could be controlled so that they can cut any DNA molecule at a predetermined site.

Where the DNA is cut it is then easy to rewrite the code of life.

“In medicine, clinical trials of new cancer therapies are underway, and the dream of being able to cure inherited diseases is about to come true. These genetic scissors have taken the life sciences into a new epoch and, in many ways, are bringing the greatest benefit to humankind,” the Royal Swedish Academy of Sciences stressed.