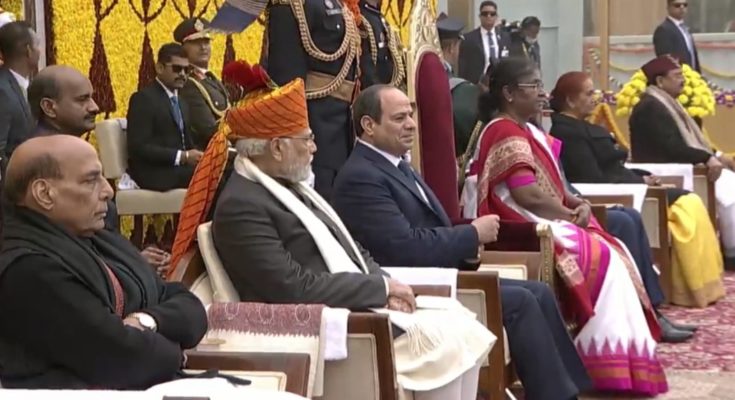 New Delhi: The Nation is celebrating its 74th Republic Day today. The main function is being held at Kartavya Path in New Delhi. President Droupadi Murmu led the nation in celebrating the Republic Day. Egyptian President Abdel Fattah El-Sisi is the Chief Guest at the parade.

During the Republic Day parade, the country\’s military prowess, cultural diversity, self-reliance initiatives, women empowerment and emergence of a ‘New India’ is being showcased. The Parade ceremony started this morning, with the visit of Prime Minister Narendra Modi to the National War Memorial where he led the nation in paying solemn tributes to the brave-hearts by laying a wreath.

As per the tradition, the National Flag was unfurled followed by the National Anthem with a booming 21-gun salute. This time, 21-gun salute was given with 105-mm Indian Field Guns replacing the vintage 25 pounder gun which reflects the growing Aatmanirbharta in defence. Four Mi-17 1V and V5 helicopters of 105 Helicopter Unit showered flower petals on the audience present at Kartavya Path. The Republic Day parade began with the President taking the salute.

For the first time, an Egyptian Military contingent took part in the Republic Day parade. The contingent, having 144 soldiers led by Colonel Mahmoud Mohamed Abdel Fattah El Kharasawy marched down the Kartavya Path.