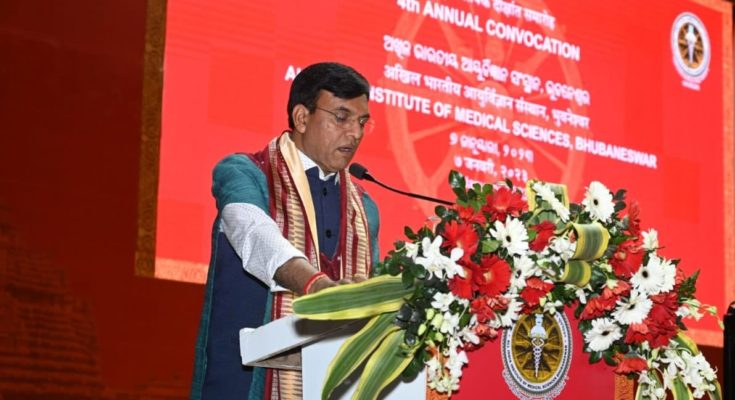 Bhubaneswar: “AIIMS Bhubaneswar has won the trust of people in the field of quality health care within a decade not only in Odisha but also in adjoining states by fulfilling the mandate of equalizing the regional imbalance in tertiary health care delivery.

This is a manifestation of the commitment of Govt of India under the leadership of Prime Minister where quality tertiary healthcare and medical education have been prioritised as part of the National Health Agenda”. This was stated by Dr. Mansukh Mandaviya, Union Minister of Health and Family Welfare as he addressed the students of AIIMS Bhubaneswar on their 4th Convocation ceremony, here.

Shri Dharmendra Pradhan, Union Minister for Education and Skill Development & Entrepreneurship and Dr Bharati Pravin Pawar, Union Minister of State for Health and Family Welfare were present on the occasion. Smt. Aparajita Sarangi, Member of Parliament was also present. The dignitaries remembered former Prime Minister Bharat Ratna Shri Atal Bihari Vajpayee who laid the foundation of the institute in 2003 and paid floral tributes to him.

Congratulating students on the convocation, the Union Health Minister urged them to wholeheartedly take the opportunity of service and responsibility that medical science brings. He said, “our sense of responsibility should align with our service to humanity”. He highlighted that the new initiatives of “Heal in India” and “Heal by India” will give an impetus to medical value travel in the country and also fulfil the demand for skilled and qualified medical and para-medical human resource across the globe.

Reiterating the commitment of the Union govt towards improving healthcare services, Dr Mandaviya said, “The number of AIIMS in the country have increased from 8 before 2014 to 23 at present”. He further said that “50 Crore families have been given health security under the Ayushman Bharat – PMJAY scheme while affordable and quality medicines are being provided by more than 9000 Jan Aushadhi Kendras across the country”.

While mentioning the AB-PMJAY, he urged the State Govt to implement the scheme in the state so that the eligible beneficiaries of Odisha can avail of the benefits of the scheme not only in the state but other states too.

Shri Dharmendra Pradhan congratulated students of AIIMS Bhubaneswar on their achievements and motivated them to take more responsibility ahead. Appreciating the rapid strides made by the institute, Shri Pradhan said, “It is a matter of pride that within ten years, AIIMS Bhubaneshwar has emerged as the second-best AIIMS in the country and the 26th best medical institution in the country, as per the NIRF rankings.”

Highlighting India’s contribution towards managing the COVID pandemic, Shri Pradhan said “India provided Made-in-India vaccines to 140 countries”. He also informed that under the administration of Prime Minister Shri Narendra Modi, the Govt is committed to have medical books in local languages to enhance the understanding of students. He urged the students to keep the campus clean and support the Prime Minister’s “Swacch Bharat” mission.

Dr Bharati Pravin Power noted that AIIMS Bhubaneswar has made a mark in kidney transplantation operations and is making rapid strides in other surgeries as well. She stated that “AIIMS Bhubaneswar always comes to mind when one thinks of the top medical institutions in the country today”. She emphasized that investment in health enhances a country’s progress. She also encouraged the young doctors to take more responsibility in the spirit of humanity.