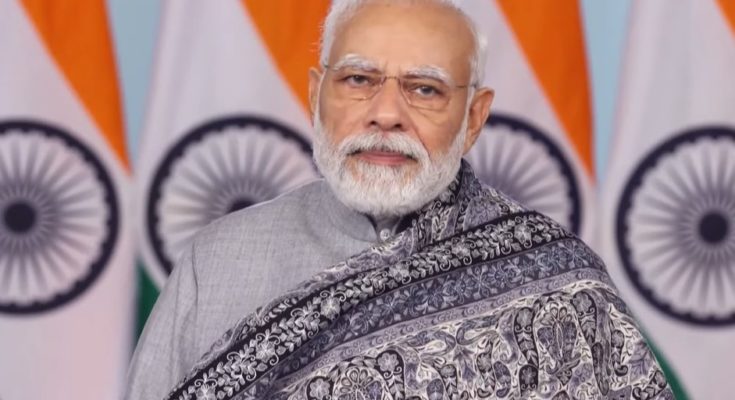 Addressing the gathering, the Prime Minister congratulated everyone associated with Shree Swaminarayan Gurukul Rajkot Sansthan on the completion of 75 years and praised the efforts of Shastriji Maharaj Shri Dharmajivandasji Swami for his tremendous efforts in this journey. The Prime Minister remarked that by just remembering the name of Bhagwan Shri Swami Narayan, one could experience new consciousness.

“Spreading true knowledge is the most important task, and this has been India’s devotion towards knowledge and education in the world which has established the roots of Indian civilisation ”, the Prime Minister remarked. The Prime Minister informed that even though the Gurukul Vidya Pratishthanam began with only seven students in Rajkot, it has forty branches worldwide today which attracts thousands of students from all over the world. He further added that in the last 75 years, Gurukul has developed the minds and hearts of the students with good thoughts and values, so that their overall development can be done. “From dedicated students in the field of spirituality to scientists in ISRO and BARC, the tradition of Gurukul has nourished every field of the country”, he said. The Prime Minister highlighted the practice of Gurukul where a fee of only one rupee is charged to poor students thereby making it easier for them to get an education.

Referring to the Indian tradition of treating knowledge as the highest pursuit of life, the Prime Minister said that when other parts of the world were identified with their ruling dynasties, Indian identity was linked with its gurukuls. “Our Gurukuls have been representing equity, equality, care and a sense of service for centuries”, he added. He remembered Nalanda and Takshshila as synonyms for India’s ancient glory. “Discovery and research were an integral part of the Indian lifestyle. From self-discovery to divinity, ayurveda to aadhyatm (spirituality), social science to solar science, from Math to metallurgy and from zero to infinity, research and new conclusions were drawn in every field. “India, in that dark age, gave humanity rays of light that paved the way for the world\’s journey of modern science”, he added. The Prime Minister also highlighted the gender equality and sensitivity of the Indian ancient gurukul system and lauded Swaminarayan Gurukul for starting ‘Kanya Gurukul’.