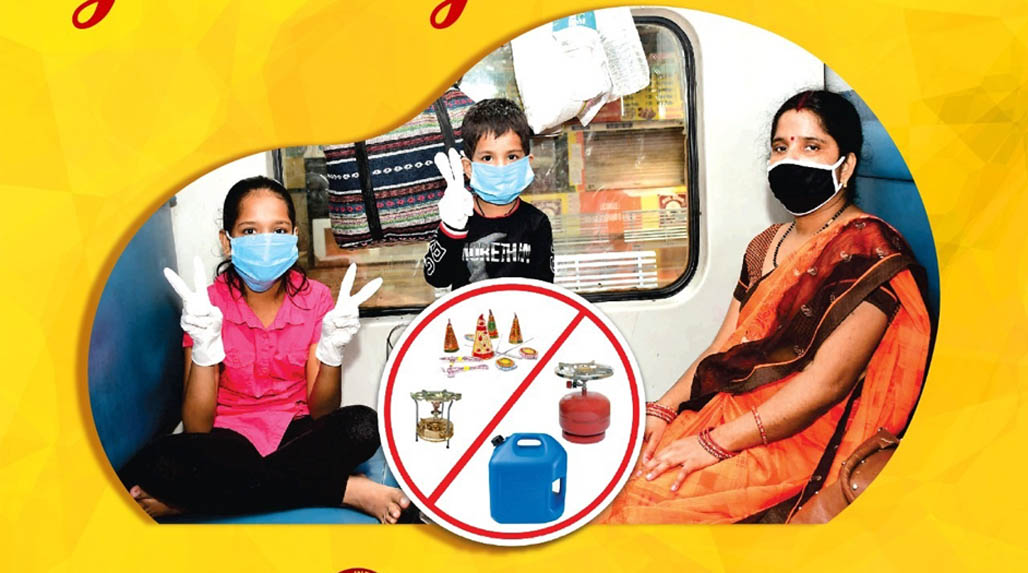 Bhubaneswar: Carrying of inflammable and explosive objects like Crackers, Gas Cylinders, Acid, Petrol, Kerosene, etc., in passenger carrying trains during train journey is a punishable offence under the Railways Act, 1989 and the offender may get an imprisonment up to 3 years. To make the train journey safer, East Coast Railway has urged passengers to be careful and not to carry and also not let their co-passengers carry inflammable or explosive objects while travelling on passenger carried trains.

As Diwali is approaching, East Coast Railway has geared up its machinery to prevent carrying crackers in Passengers carried Trains. Carrying inflammable items during train journey is strictly prohibited. East Coast Railway has advised all its three Divisions, i.e. Khurda Road, Sambalpur & Waltair to launch a Special Safety Drive to keep a strict vigil on carrying inflammable items in trains for the safety of the passengers during Diwali Celebrations.

If any passenger is seen carrying inflammable items, the co-passengers are requested to inform on-duty Railway Staff like Railway Protection Force (RPF) & Government Railway Police (GRP) personnel, TTEs, Coach Attendants, Guards of the train, Station Managers, to save the train passengers from danger.

Passengers can call Help Line Number 139 to report any incident concerning carrying crackers on train. Steps have been taken by the Security Department of East Coast Railway to make the train passengers and Rail Users aware of the dangers of carrying crackers and explosive substances. Surprise checks are being carried out randomly in trains in this regard in case of any suspicion regarding carrying of crackers.

Apart from this, East Coast Railway has also taken awareness drive to alert passengers through public announcement system at Stations. Random and surprise checks will also be undertaken by deputing Railway Staff in coordination with Government Railway Police (GRP), Railway Protection Force (RPF) and Civil Defence Volunteers and special attention will be given to check parcels or luggage loading in Parcel Vans.

These apart, Train Escorting teams and Meri Saheli Teams have also been advised to keep sharp watch on the inflammable items in the trains and at the stations. These apart, adequate fire extinguishers and fire fighting equipments are being provided at Stations, Goods Shed, Guard’s Brake Van, AC Coaches, Pantry Cars & Locomotives.