Dr Harsh Vardhan chairs 26th meeting of Group of Ministers on COVID-19 - The Samikhsya Skip to the content
National, Special 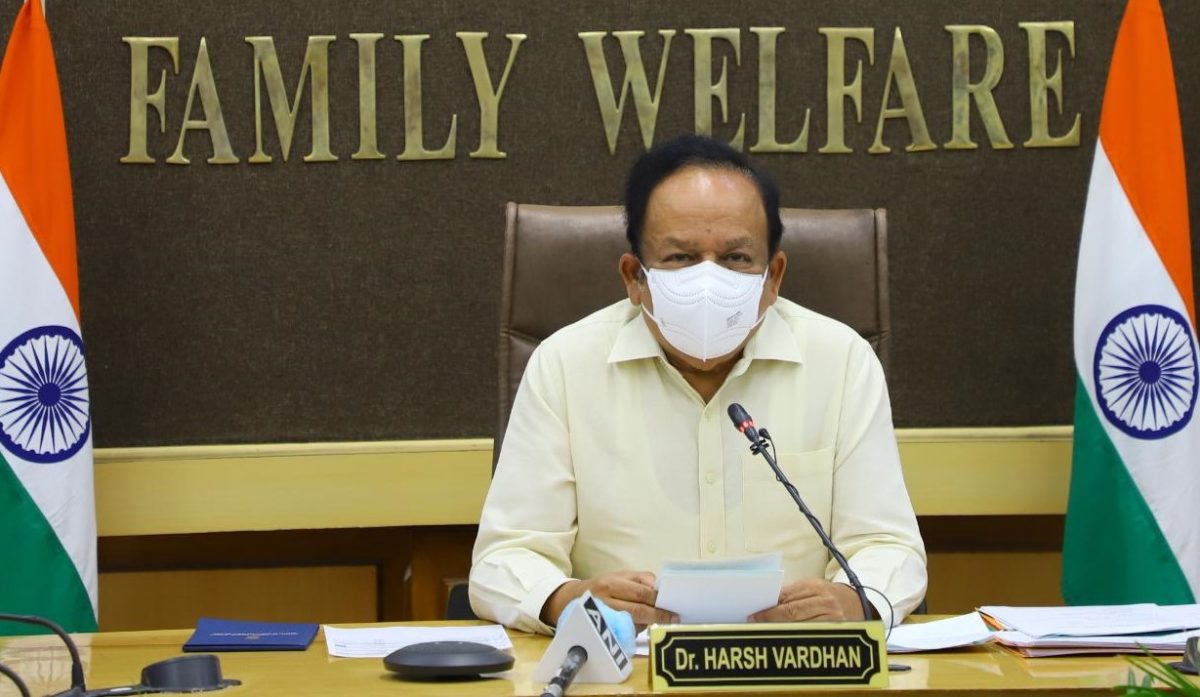 At the outset, Dr. Harsh Vardhan expressed his appreciation to all COVID warriors who have remained steadfast in their duty during the pandemic, which is now in its twelfth month, without showing any signs of deprivationan fatigue.Speaking on their contribution to the country’s achievements today, he said, “India’s COVID 19 New Cases have dropped to less than 3 lakhs for the first time after 26 days. Also, a net decline of 1,01,461 cases have been recorded in the active caseload in the last 24 hours.”

Dr. Harsh Vardhan lauded the efforts of defence scientists and the leadership of Defence Minister Shri Rajnath Singh and Prime Minister Shri Narendra Modi for launching India’s first indigenous drug 2-deoxy-D-glucose or 2-DG (developed by DRDO in collaboration with INMAS and Hyderabad based Dr. Reddys laboratories). The research efforts for the drug started in April 2020 and completed recently when DCGI gave it emergency use approval (EUA). The Minister informed the members that the drug has the potential to become a game changer in our response against COVID pandemic as it reduces the dependence of patients on oxygen administration and has the potential of getting absorbed differentially and in a selected manner. In the COVID infected cells, it inhibits virus synthesis and energy production for the process.

He noted that the Centre continues to help States under a ‘whole of government’ approach to tide over the Pandemic. 422.79 lakh N95 masks, 176.91 lakh PPE kits, 52.64 lakh Remdesivir injections and 45,066 ventilators were distributed among States/UTs.

Dr. Harsh Vardhan informed his colleagues that 17 new labs are going to be added to the INSACOG network to increase the number of samples screened and allow for more spatial analysis. The Network is presently served by 10 labs located at different corners of the country.

Dr. Sujeet K Singh, Director (NCDC) presented a detailed report on the mutations of SARS-CoV-2 and Variants of Concern (VoCs) being reported in India. He showed figures related to the state-wise prevalence of VoCs like the B.1.1.7 and B.1.617 across India. B.1.1.7 lineage (UK variant) was found predominant in samples collected in Punjab and Chandigarh between February and March, 2021.

Dr. Balaram Bhargava, Secretary (Health Research) & DG ICMR presented on the innovative changes in testing policy that would widen its scope of application and help in mass screening for COVID, particularly in peri-urban and rural settings where health infrastructure is relatively weak. Deployment of mobile RT-PCR testing vans and amplification of RAT tests was presented as the way forward. While the present capacity is around 25 lakhs (RTPCR-13 lakh and RAT- 12 lakh), this is projected to exponentially increase to 45 lakhs (RTPCR-18 lakh and RAT- 27 lakh) under the new testing regimen.

DG, ICMR also informed regarding the Home Isolation guidelines which has been converted into Hindi and other regional languages for wider reach. Warning signs for hospitalization, admission to ICU and for potential administration of Remdesivir and Tocilizumab were also highlighted.

Ms. S. Aparna, Secretary (Pharma) informed that a dedicated cell has been created to coordinate production and allocation of drugs in demand to treat COVID-19. Manufacturers have been advised to increase production drugs. The three-pronged strategy undertaken was apprised to the Ministers:

Stress was laid on the procurement and allocation of Remdesivir, Tocilizumab and Amphotericin-B. She notified that demand for Favipiravir too increased although the drug is not recommended in COVID medical guidelines. She suggested IEC campaigns for judicious use of these drugs. She also highlighted that Remdesivir Production has more than tripled in the country with government intervention from around 39 lakh to 118 lakh vials per month. Demand for Amphotericin-B which is used for treatment of Mucor mycosis has also increased. Five suppliers have been identified and efforts are being made for optimal allocation of the drug. States were given 1 lakh vials from 1st to 14th May 2021 while avenues for import are being actively explored.

The Union Health Secretary apprised the meeting that the CoWIN platform is being made available in Hindi and 14 regional languages by next week.