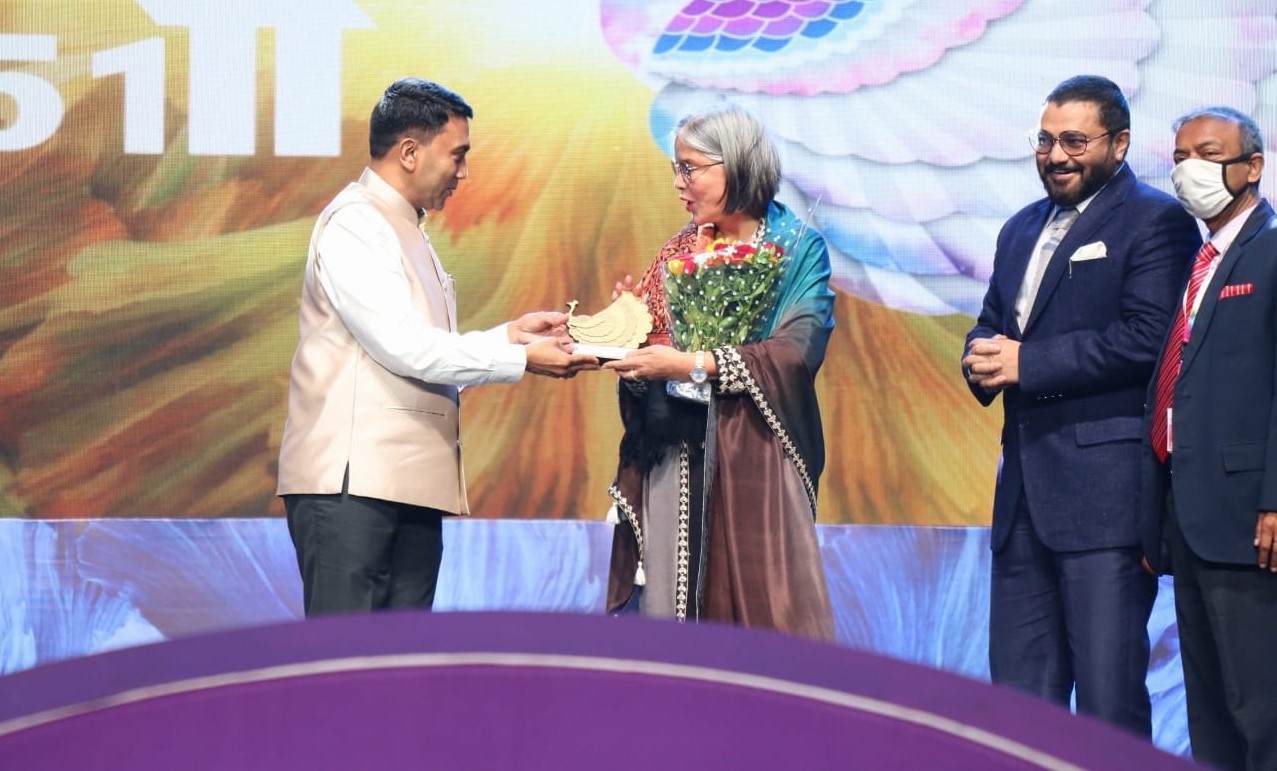 Panaji, IFFI 51 Honours the crème de la crème of World Cinema
The epic World War II film Into the Darkness (De forbandede år) which portrays the story of a Danish electronics factory owner who is forced to produce for the occupying Nazi forces, has won the coveted Golden Peacock Award at the just-concluded 51st edition of the International Film Festival of India. The Golden Peacock Award consists of a cash prize of Rs. 40 lakhs (Rs. 4 million) to be shared equally between Director Anders Refn and Producer Lene Børglum, both of whom have also been presented with a certificate each as well.

The awards have been announced at the closing ceremony of the first ever hybrid version of the International Film Festival of India (IFFI), held in Goa today, January 24, 2021.

The IFFI 51 Special Jury Award for a film goes to Bulgarian Director Kamin Kalev for his 2020 film February. Kalev receives a Silver Peacock, a certificate and cash award of 15 lakh rupees (Rs. 1.5 million).

The Award for Best Debut Director has been presented to Brazilian Director Cássio Pereira dos Santos, for his 2020 Portugese film Valentina, an eponymous film which tells the story of a 17-year-old transgender Brazilian girl, whose sole aim is to lead a normal life with her mother.

The prestigious ICFT UNESCO Gandhi Award, given to a film that best reflects Mahatma Gandhi\’s ideals of peace, tolerance and non-violence, has been awarded to Ameen Nayfeh’s 2020 Arabic film 200 Meters. The Award consists of a certificate and a medal and is given as part of IFFI’s collaboration with the International Council for Film, Television and Audiovisual Communication (ICFT) Paris.

The Awards have been decided by the IFFI 51 International Jury comprising eminent filmmakers from across the world, with Argentine Director Pablo Cesar as Chairman. Prasanna Vithanage (Sri Lanka), Abu Bakr Shawky (Austria), Priyadarshan (India) and Rubaiyat Hossain (Bangladesh) were the other members of the Jury.

In a video message, Jury Chairman Pablo Cesar thanked the festival for the opportunity given to the Jury to evaluate the films in the International Competition category. “We are very happy with the wide and varied themes showcased in the films selected for the festival, especially those that make us reflect on individual freedoms, rights of children and all the people of this world, empowerment of women and memories of things that some people have done which we are sure we never want to happen again. Thank you IFFI for selection of films which are rich in content and aesthetic search.”
Till the Next IFFI

Veteran Bollywood actor Ms. Zeenat Aman, and MP and actor Shri Ravi Kishan were the Guests of Honour at the colourfully cultural closing ceremony held at the Shyama Prasad Mukherjee Indoor Stadium, in Talegaon, Goa today. Veteran actor, director and producer Biswajit Chatterjee has been presented with the Indian Personality of the Year Award on the occasion. Governor of Goa Shri Bhagat Singh Koshiyari, Chief Minister of Goa Dr. Pramod Sawant, Union Minister of State for Environment, Forest & Climate Change Shri Babul Supriyo too graced the closing ceremony, along with a host of dignitaries from various spheres of life.

Member of International Jury, Director Shri Priyadarshan Nair; IFFI Steering Committee members Shri Shaji N. Karun, Shri Rahul Rawail, Ms Manju Borah and Shri Ravi Kottarakkara; and celebrities from India and abroad walked the red carpet and attended the ceremony.
Governor of Goa Shri Bhagat Singh Koshiyari lauded the organizers for holding the festival, despite the extraordinary times in which we are going through. “Cinema is uniting not only our country, but our neighbouring countries as well.

I salute Indian cinema and filmmakers. Film festival is an opportunity to learn and to remind us that the whole world is one, despite differences. Cinema touches the heart, not the mind; it comes not from the mind but from the heart.”

Addressing the gathering, Union Minister Shri Babul Supriyo said this edition of IFFI has conquered all ifs and buts and has emerged as the perfect platform for excellence. “IFFI 51 is a one-of-kind achievement, given that we organized this in a hybrid mode amidst the pandemic. The festival edition has conquered all ifs and buts to ensure that there is no if when it comes to ensuring the bonding and closeness between us human beings.

The big screen entertains, makes us cry and makes us life in a different manner, when great directors make films to enlighten and entertain us. It also magnifies all the emotions we have. India, which makes the largest number of films in the world, has gotten together with the rest of the world to celebrate cinema.”

Stating that IFFI stood out as a wonderful sign of creativity, Chief Minister of Goa Dr. Pramod Sawant congratulated all film personalities, delegates and organizers. “I welcome filmmakers of India and abroad to come and shoot in Goa. We will be committed to make 52nd IFFI even better”.

Receiving the Indian Personality of the Year Award, the veteran actor Biswajit Chatterjee said: “I thank the Government of India and the Ministry of Information and Broadcasting from the bottom of my heart, for honouring me this with award. This year, we came to know that Bangladesh is our focus country, a country with which I have a deep connection.

When Bangladesh was being attacked, genius director Ritwik Gatak was with me in Mumbai and we used to get inspired by the speeches of Bangabandhu Sheikh Mujibur Rahman. Then as per Ritwik Da’s suggestion, we made the documentary THERE FLOWS PADMA, THE MOTHER RIVER. I can never forget the love I got from Bangladesh. Bangladesh and India are one, we are brethren; we are not separate.”

In a video message, celebrated actor Amitabh Bachchan thanked the Government of India for keeping cinema alive during these difficult times, saying that the festival is a great example of transforming challenges into opportunities.

Secretary, Ministry of Information & Broadcasting Shri Amit Khare said that the festival marks the triumph of human spirit over COVID-19. “This edition of IFFI is special as it positions India’s position to organize a film festival in a hybrid mode. This has happened for the first time in the whole of Asia. This film festival highlights India’s superior arts as well as well-developed techniques.”
Some More Highlights of IFFI 51

IFFI 51 has honoured Italian cinematographer Vittorio Storaro with the Lifetime Achievement Award. The legendary cinematographer said that he owes the incredible visual journey he had, to his colleagues and great directors like Bernardo Bertolucci, Francis Coppola, Carlos Oliveira and Woody Allen.

The 14th Edition of NFDC Film Bazaar was held in a hybrid format, was also virtually launched this time. In the retrospective section, legendary film-maker Satyajit Ray’s popular classics were shown. On the occasion of the 150th Birth Anniversary of the father of Indian Cinema, four films by Dadasaheb Phalke were also screened. IFFI also paid Homage to 18 film personalities who passed away in the previous year. This included much loved personalities like Irrfan Khan, Rishi Kapoor, S.P Balasubrahmanyam, Soumitra Chatterjee, Sushant Singh Rajput and Basu Chatterjee.

The mid-fest film was Sandeep Kumar’s Mehrunisa, a provocative film questioning the entrenched patriarchy in the film industry.
The festival comes to a close, with the screening of closing film Wife of A Spy, a Japanese film directed by Kiyoshi Kurosawa. The film tells the story of a husband and wife who are thrown off guard by some unforeseen circumstances.

Kurosawa, who addressed the IFFI 51 closing ceremony through a video message, said: “It is a huge honour that Wife of A Spy has been selected as the closing film of IFFI. The film has reached beyond the sea and I believe it tells you eloquently rather than I speaking about it. My movie is set in Japan of the 1940’s, and it depicts a couple who are at the mercy of the time.”