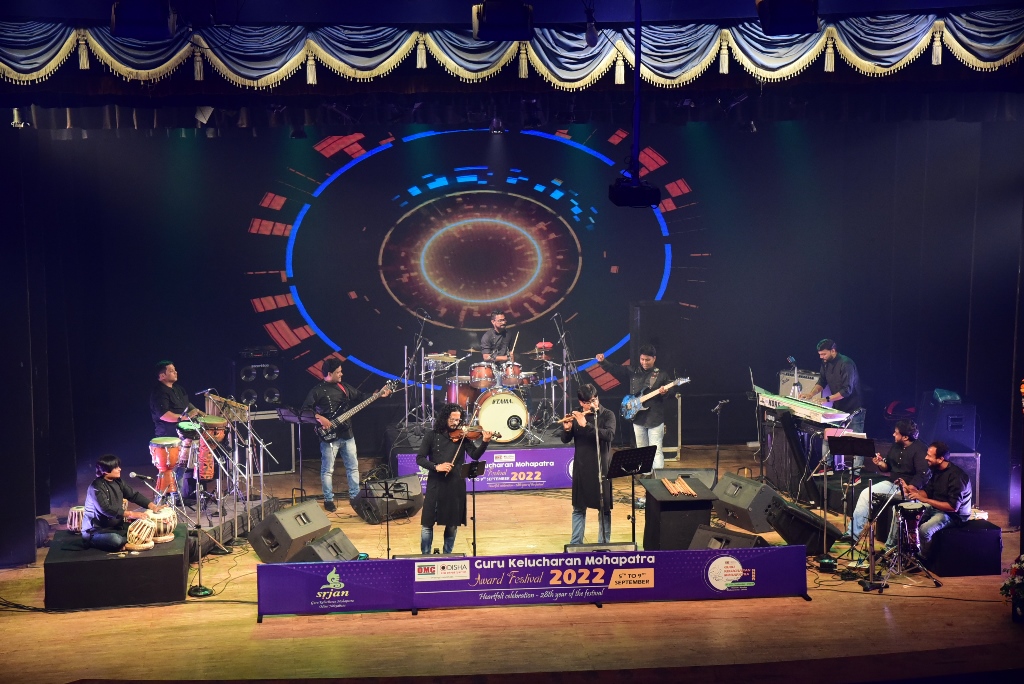 After yet another laudable day of dance, music, and organisational precision, the third evening of the Award Festival began with the lighting of the lamp by esteemed guests Shri Ranjan Kumar Das, Director, Odia Language Literature & Culture, Government of Odisha; Shri Tathagat Satpathy, Editor, Dharitri & Orissa Post; and Dr. Itirani Samant, Editor, Kadambini. It was a resounding evening of music from the Shivagni ensemble, as they seamlessly fused the classical, contemporary, creative, and experimental genres, creating superb listening pleasure for the audience.

They commenced their performance with an invocation to Lord Ganesha, Ganesha–The Vighnaharta. In this fitting beginning, they paid obeisance to Lord Ganesha, the destroyer of all obstacles and difficulties in life. Their next track, titled Impassioned, was a highly evocative track played by the artistes with intensity and passion, living up to its name. Celebrating the pride of Odisha, rooted in the state’s rich culture and heritage, Shivagni then paid tribute to the vibrant tradition of Odisha through their rendition Odissi Fusion. The next presentation, Boond–The rhythm of falling rain, was a testament to nature’s inherent rhythm. Showcasing the soothing sound of the rain, which touches the hearts of all those, far and near, the musicians of Shivagni mesmerized the audience with their realism and moving rendition of this track.

While Boondexplored the beauty of nature’s rhythm, Oasis touched upon the concepts of faith, hope, and optimism in the face of adversity, connoting the image of an oasis in the desert bringing respite and relief to weary hearts. Showcasing their sheer versatility, Shivagni then presented Kabira, a tribute to SantKabir, highlighting the great dohas of the poet and saint in a novel reimagination and exploration of music and text.

Irish, a confluence of 16 different Ragas was inspired by the soul-stirring melodies of Irish folk tunes and harmony, presented as a journey through the various Ragas. The musicians meandered in and out of Irish tunes before stepping into more traditional Indian territory, all in Ragamala, making for an auditory delight. This was juxtaposed by the rendition of Touch of Heaven, an experience of the infinite.

In remembrance of the great Odia poet and writer, Padma Shri awardee, Shri Mayadhar Mansingh, Shivagni explored the song Sakale Daakanti Tame Tame, with heartfelt emotions and technical expertise. In their final presentation, Shivansh–The rhythm of spiritual beats, the auditorium resounded to the cadence of rhythmic beats and melodic notes of the musicians, as they paid their obeisance to Lord Shiva, the creator and destroyer. The musicians explored the all-pervading and omniscient powers of the great Lord with their rhythmic intricacies, harmonious notes, and commanding stage presence.

An auditory delight to audiences who witnessed their own home orchestra perform to perfection, Shivagni, led by the expertise of Shri Agnimitra Behera and Shri Srinibas Satapathy, was aided by the skilful and distinctive light designing of Shri Debiprasad Mishra and the brilliant sound engineering of Shri C. Anand Krishna. Online viewers can find the live stream on Srjan’s Facebook page and YouTube channel. The festival is being attended physically and virtually by several dignitaries, influential citizens, luminaries from the world of Art, and audiences from across India and abroad. The entire festival has been curated, conceptualized, and designed by Guru Ratikant Mohapatra, with the programme execution by Shri Debiprasad Mishra. Shri Mrutyunjaya Rath and Smt. Anuja Mishra ably conducted the proceedings of the evening.

The penultimate evening of the festival on September 8th, commences with a Carnatic vocal recital by Shri Sikkil Gurucharan, followed by a Kathak recital by Vidushi Paramita Maitra and her ensemble Nrityangan Kathak Kendra (NKK).