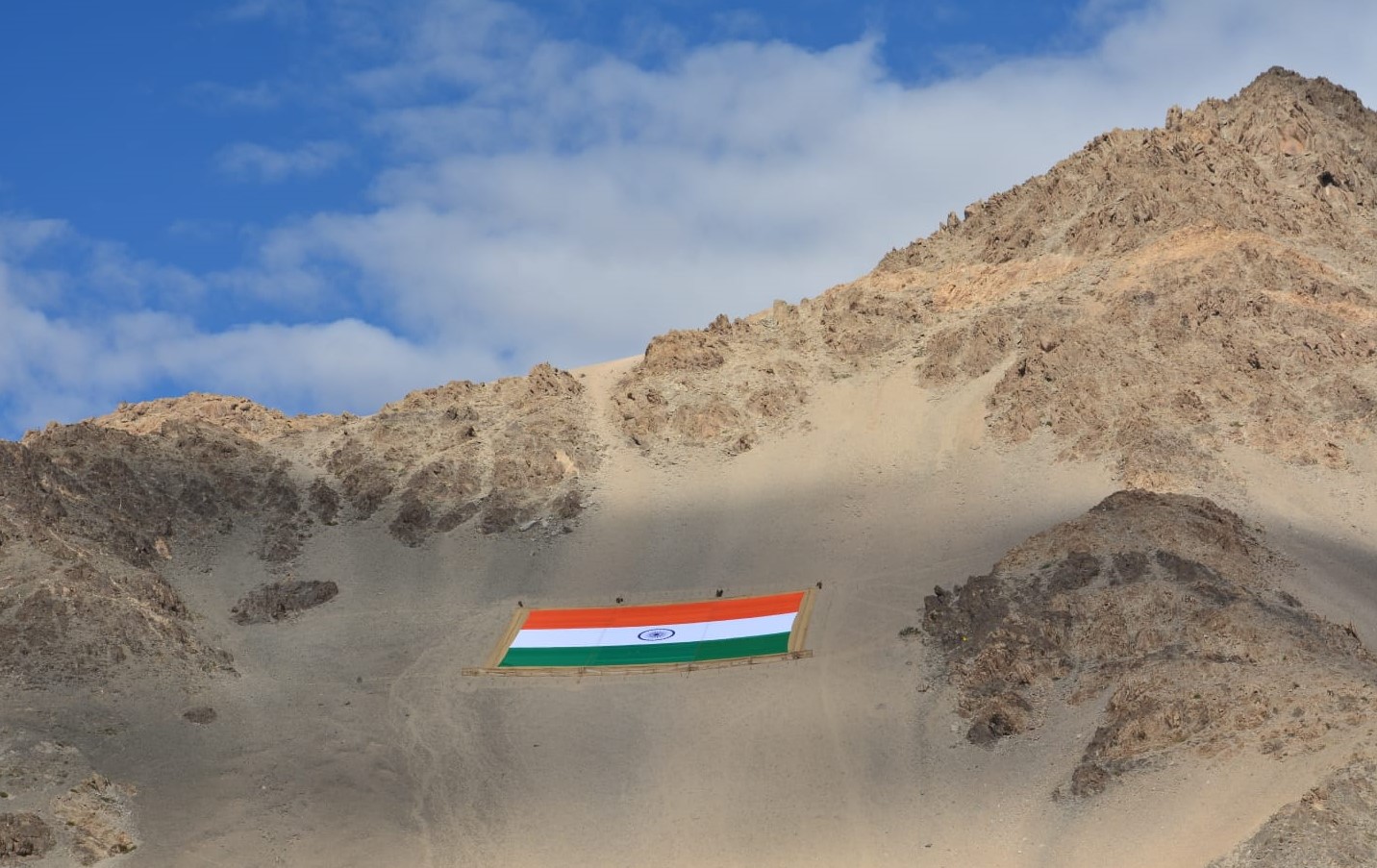 New Delhi: Pride and patriotism, the collective spirit of Indian-ness and the heritage artisanal craft of Khadi, brought the nation together in saluting the world’s largest National Flag, made of Khadi cotton fabric today at Leh. Khadi and Village Industries Commission (KVIC) has prepared the Monumental Khadi National Flag to pay the highest respects to Mahatma Gandhi, who gifted Khadi, the most eco-friendly fabric to the world.

The flag was unveiled by Lieutenant Governor of Ladakh Shri RK Mathur, who said the Monumental National Flag would bind every Indian together with the patriotic spirit. Chairman KVIC Shri Vinai Kumar Saxena, MP from Ladakh Shri JT Namgyal and Chief of Army Staff General MM Narawane were present on the occasion.

The Monumental National Flag measures 225 feet long, 150 feet wide and weighs (approx.) 1400 kg. Making of this monumental National Flag has created nearly 3500 man hours of additional work for Khadi artisans and allied workers. A whopping 4600 meters of hand-spun, hand-woven Khadi cotton bunting has been used in making the flag which covers the total area of 33,750 square feet. The Ashok Chakra in the flag measures a diameter of 30 feet. It took 49 days for 70 Khadi artisans to prepare this flag.

KVIC has conceptualized and prepared the flag to celebrate “Azadi ka Amrit Mahotsav”, the 75 years of Independence. Since, handling and displaying the National Flag of this dimension required utmost care and precision, KVIC has handed over the flag to the Indian Army. The Army has displayed the flag on a hilltop in the main Leh city. The Army has prepared a frame to display the flag so that it does not touch the ground.

The flag has been divided into 9 equal parts weighing 100 kg each and each part measures 50 x 75 feet. Nefa has been provided on all four sides that contains 12 mm rope. A total of 12 high quality nylon ropes – i.e. 3 ropes each on top & bottom sides and 3 ropes on left & right sides have been provided with the breaking load capacity of approx. 3000 Kgs.

Further, each rope has a loop on both the ends that can collectively hold the weight of the flag. These parts have been stitched together to make the flag and joints have been stitched in such way that the ropes inside the nefa will remain invisible. The inner lining of nefa is made of chemically coated Khadi bunting that reduces the friction from the ropes and prevent damage to the flag’s fabric. Nefa has been provided in the tri-color so as to merge with the colors of the flag.