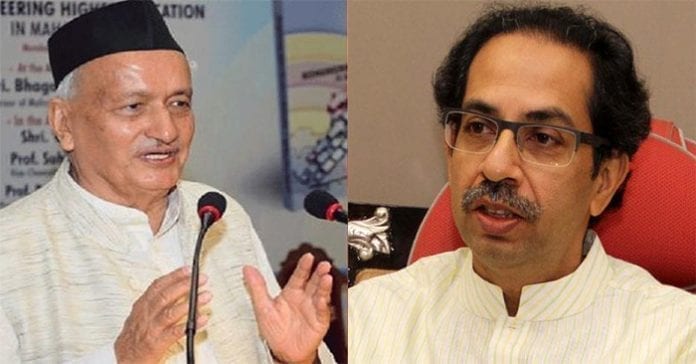 Mumbai: In an unprecedented development, Maharashtra Governor Bhagat Singh Koshyari and Chief Minister Uddhav Thackeray were engaged in an ugly ‘letter-war over the issue of reopening of temples in the state.

Making a case for permitting people to worship in temples — closed since the lockdown was clamped on March 23 — the Governor asked a pointed question to Thackeray: “You have been a strong votary of Hindutva… Have you turned ‘secular’ yourself, the term which you hated?”

Koshyari pointed out how Thackeray had “publicly espoused” his devotion for Lord Ram by visiting Ayodhya after taking charge as CM and later performed the pooja at the famed Pandharpur’s Lord Vitthal and Goddess Rukmini Temple on Ashadhi Ekadashi, July 1.

“It is ironic that while on one hand, the state government has permitted the opening of bars, restaurants and beaches, on the other hand our Gods and Goddesses have been condemned to stay in the lockdown,” Governor Koshyari said.

In an equally strong response, Thackeray said what the Governor mentioned about ‘Hindutva’ was absolutely correct.

“However, I don’t need a certificate on Hindutva from anybody, nor do I have to learn it from anyone. Those giving a warm welcome to people who compare my state and its capital (Mumbai) with Pakistan Occupied Kashmir don’t fit in my Hindutva,” Thackeray declared.

Hitting back at the Governor’s comments on Thackeray’s ‘secular’ credentials, the Shiv Sena President asked: “Are you implying that merely opening temples is ‘Hindutva’ and keeping them shut is being ‘secular’,?”

“You have taken the oath as Governor on the Constitution whose core principle is ‘secularism’ – don’t you agree with that,” Thackeray asked pointedly.

Koshyari also wondered whether Thackeray was getting any ‘divine premonition’ to repeatedly keep postponing the reopening of the places of worship and said these were thrown open in Delhi on June 8 and across the country by end-June.

Thackeray shot back by saying “you (Koshyari) may have experienced such things, I am not so great” and said he (Thackeray) was trying to do the best for the people of Maharashtra by seeing what is going on around the country or states.

Koshyari reminded how Thackeray had on June 1 “famously declared” how the lockdown would be consigned to the dustbin, but four months after “your famous announcement” the ban was again extended the ban on reopening of places of worship.

The CM reiterated that the prime duty of our (Maha Vikas Aghadi) government is to take care of peoples’ lives which safeguarding their sentiments on faith, and just as “it was wrong to abruptly impose lockdown, it would not be right to lift it suddenly” given the scourge of Coronavirus.

To the Governor’s ‘request’ to immediately announce reopening places of worship as he had received many requests and representations, Thackeray took a swipe saying the three memorandums were from the Bharatiya Janata Party which would be a ‘coincidence’.

Nevertheless, he assured the Governor that the state government would consider his request seriously and take an appropriate decision soon with all Covid precautions.

Shiv Sena Spokesperson and MP said the Hon’ Governor should not interfere in the state government’s functioning since it is democratically-elected, and should only be concerned if the government is functioning as per the Constitutional norms.