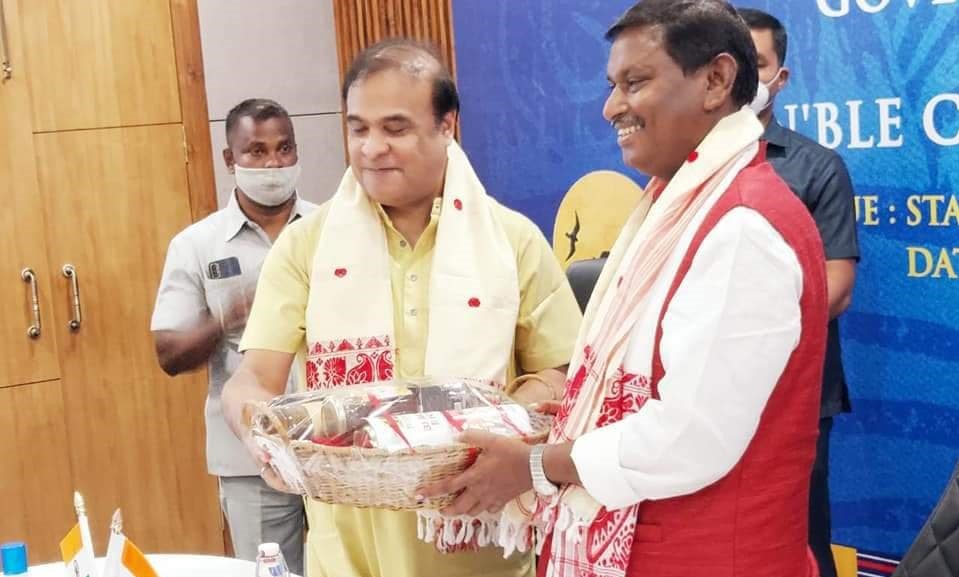 New Delhi: Van Dhan can be a game changer for promoting Tribal Livelihoods and enterprises in Assam while Eklavya Vidyalayas will impart uniform and high quality education to tribal children,Arjun Munda, Minister of Tribal Affairs said at the State Guest House in Guwahati on today.

Munda was there to meet with Himanta Biswa Sharma, the Chief Minister of Assam, while on a two-day visit to the state. The purpose of this extensive meeting with the Chief Minister was to review and understand the status of the implementation of tribal development programmes (MFP, VDSHGs and TRIFOOD projects) in the state. This meeting was also attended by Ministers, Principal Secretary of Government of Assam, Shri Pravir Krishna, Managing Director, TRIFED, and other TRIFED officials.

During the meeting, the progress made by the State of Assam with respect to the programmes that have been put in place by the government for improving tribal lives such as the Minimum Support Price for Minor Forest Produce (MSP for MFP), Van Dhan Yojana, ESDP training for tribals were reviewed by Shri Arjun Munda. Earlier in August, the Chief Minister of Assam had met with the TRIFED team in New Delhi to chalk out plans for expanding tribal development in the state and defining the steps for the way forward. These future plans to take tribal development to the next level were also showcased and discussed during this meeting.

On his two day visit, Munda is also accompanied by Shri Pravir Krishna, Managing Director, TRIFED and other senior officials of the Ministry and TRIFED. Post the meeting with the Chief Minister, the Minister attended the Voice of North East Janjatiya Leader Conference at Lakshmi Bai National Institute of Physical Education at the NE Regional Centre.

Located in North-eastern India, Assam has a substantial tribal population, with 3,308,570 forest dwellers who constitute 12.4% of the total population. The ‘Mechanism for Marketing of Minor Forest Produce (MFP) through Minimum Support Price (MSP) & Development of Value Chain for MFP’ has come as a beacon of change in the past two years in this state.

Conceptualised and implemented by TRIFED in association with State Government Agencies across 21 states of the country, the scheme has emerged as a source of great relief for tribal gatherers injecting crores of rupees directly in the tribal economy. The State of Assam has utilized the MSP for MFP scheme wherein the total procurement utilizing the Govt. of India fund is of 58.56 MT which is worth Rs. 37.39 Lakhs.

Under the Van Dhan Scheme total of 1,920 VD SHG have been sanctioned which are subsumed into 128 VDVK Clusters. This is directly benefiting 37,786 forest tribal gatherers. The total amount sanctioned for operationalization of these VDVKCs is Rs. 19.20 Crores.

The itinerary for the second day includes a meeting with Shri Jagdish Mukhi, , the Governor of Assam and a planned visit to a Van Dhan Workshop being conducted by IIE, where he will interact with the beneficiaries of the scheme.

Such a review, monitoring and implementation of the programmes at ground level is being planned for all states so that impact in generating income for the tribal people and empowering them be hastened.

The visits and the programmes are aimed to give effect to a complete transformation of tribal lives and livelihoods across the country and progress towards an Atmanirbhar Bharat.