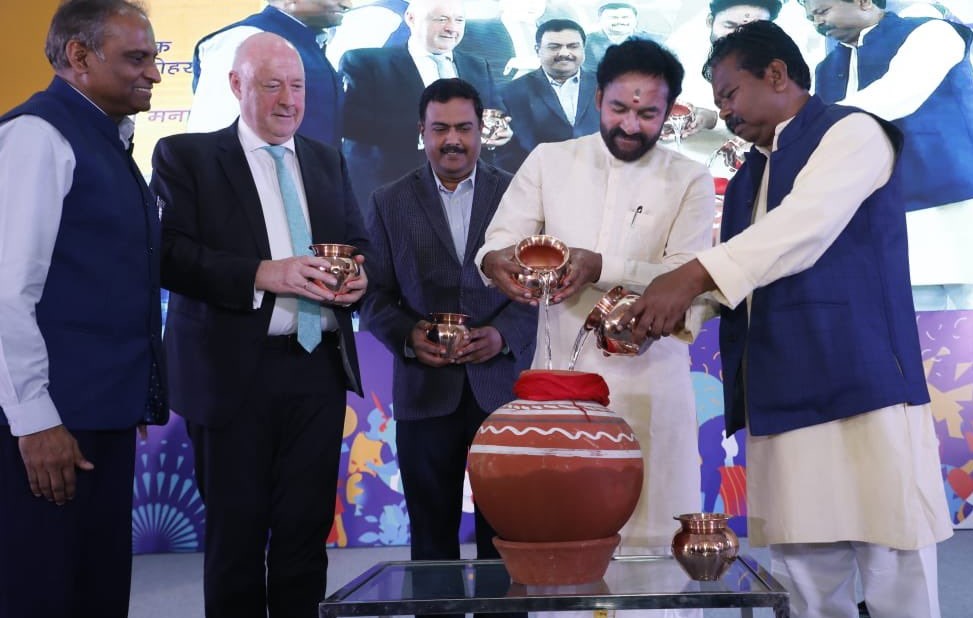 Taking inspiration from the speech of Prime Minister, Shri Narendra Modi on 26th September 2021, the central aim of the Ganga Utsav- The River Festival 2022 is to celebrate all the rivers of India (Nadi Utsav). NMCG has been celebrating Ganga Utsav since 2017 every year on 4th November, the day on which river Ganga was declared the National River of India in the year 2008.

Union Minister of Jal Shakti, Shri Gajendra Singh Shekhawat, began his address by congratulating everyone who became the part of the Ganga Utsav 2022 and made it known on the national as well as international stage. “The expansion of civilization is not possible without rivers, they are the elixir of life, Ganga is not just our National River but is also our cultural heritage. Despite being a country imbibing different languages, religions, cultures and music, there are some elements that bind each one of us together and unite us. Ganga is one of them.”

Union Jal Shakti Minister said “The Indian civilization and culture can never be complete without mentioning Mother Ganga. Mokshadayini Maa Ganga is not just a river, but is the very basis of religion, philosophy, culture, civilization flowing through the ages in India. Its pure flow has assimilated every aspect of the land of India. It not just gives water, but also gives nutrition and employment opportunities.”

He mentioned Prime Minister Narendra Modi’s speech in Madison Square Garden in 2014 wherein he spoke about the dream of making Ganga pollution free. “Through the efforts of Namami Gange and volunteers, River Ganga has become Aviral and Nirmal. Any cause, no matter big or small, can be achieved when we combine all the individual efforts” He thanked everyone who has contributed to the Clean Ganga Fund, irrespective of the amount donated.

Shri Shekhawat noted how in the ancient times our sages imparted religious messages on Ganga so that people keep it clean. “Through Arth Ganga, we are generating economic opportunities for the individuals living near Ganga basin,” he said, adding, “Namami Gange is able to adopt a holistic and multi-sectoral approach for conservation, promotion and rejuvenation of Ganga and its tributaries. This program, run by the National Mission for Clean Ganga, is emerging as a river rejuvenation model across the country. He said that it is important to promote natural farming practices and incentivise farmers to shift to Natural Farming. Medicinal plantation should be done at a bigger scale as well.

The Union Minister further said “we need to move beyond Ganga cleanliness and Nirmalta and also look into it river-people connect and prevent it from getting polluted”. He also mentioned the significance of promoting tourism along River Ganga and how Ganga model can be applied to other rivers of the country for their rejuvenation. Thanking everyone associated with Ganga, he said that through Ganga Utsav 2022 people are able to connect with River Ganga and hoped for continued success.

Congratulating the NMCG on celebrating the 6th edition of Ganga Utsav, Shri G Kishan Reddy said “through this festival, the social, cultural and historical heritage of India is showcased. Jan Bhagidari is very important in the rejuvenation of rivers across the country and the relation between people and rivers is so strong that rivers are revered as Mothers in India. Ganga Utsav 2022 is also representing the Azadi ka Amrit Mahotsav that is being celebrated across the country”.

Giving the example of Southern India, Shri Reddy said “the people across the country have immense faith in Ganga, which is a symbol of our culture and civilization. Conservation of rivers is the biggest responsibility which we have to fulfill together, especially River Ganga which selflessly provides livelihood to more than 40% of the population and constitutes more than 20% of the country’s landmass”.

Shri Reddy also said “various initiatives taken by the Ministry of Tourism in collaboration with the National Mission for Clean Ganga to promote tourism in the areas of Ganga Basin. These initiatives will generate employment opportunities for the local communities giving impetus to Arth Ganga, the concept espoused by the Prime Minister, Shri Narendra Modi. Ganga and tourism are related to each other in such a way that they cannot be separated.

Today, tourists from all over the world are coming to these tourist places on the banks of the Ganges. For the first time in the history of independent India, a new National Tourism Policy is being finalized by the Government of India. Ganga Utsav is a unique and one-of-its-kind event and engaging young children with river conservation is a commendable step.

Cleaning our rivers is not the job of government bodies alone, but of every single individual whose lives have been touched by the rivers of the country, irrespective of caste, class, gender and religion. It is the responsibility of every individual to work towards Ganga conservation. The government’s initiative in this regard has been of complete commitment and determination towards the cause”.

Shri Bishweswar Tudu, Minister of State, Jal Shakti said “Ganga is not just a river but a focal point of our civilization. Ganga river is one of the oldest rivers in the world, and is revered in every family of the country. The importance of rivers in Indian culture can be known from the fact that there are many such areas like religious, social, economic, commercial, agriculture, tourism and medicine which are directly connected with our rivers.

Rivers are the basis of the life of the Indian people not only as a source of water, but they have been the center of faith. When we talk about rivers, it cannot be complete unless we talk about Ganga. Among the rivers, the Ganges has a special place, which is an integral part of our Indian heritage. Ongoing projects have been tirelessly working towards Ganga rejuvenation.

The main objective of this festival is to bring about a change in the behavior of people towards water and ecology with public awareness, participation, engagement among the people of the Ganga basin. The festival has acted as an important platform to strengthen ties with people from all walks of life. At the same time, it has helped in promoting development in and around the Ganga basin.”

Shri G. Asok Kumar, DG- NMCG, welcomed the Union Ministers and other dignitaries to the event. He proclaimed the event to be of the people and not of one single body. He welcomed everyone present at the event and expressed his gratitude towards all the performers, children, stakeholders and participants of Ganga Utsav 2022. The 6th edition of Ganga Utsav 2022 is significant, he noted, as Ganga represents not just our National River, but also, our cultural heritage and traditions associated with it.