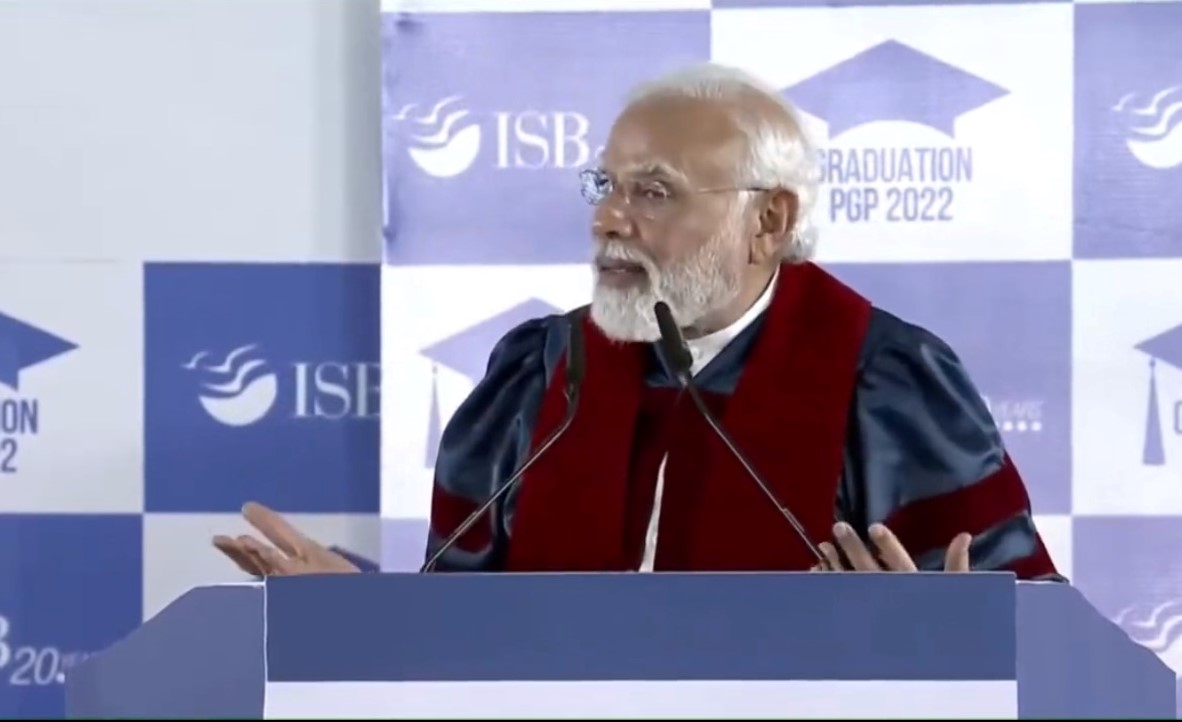 New Delhi: Prime Minister Narendra Modi participated in the celebration of the completion of 20 years of ISB Hyderabad and addressed the graduation ceremony of the PGP Class of 2022.

At the outset, the Prime Minister paid tributes to those who have contributed to take the institute to its current glory. He recalled that former Prime Minister Atal Bihari Vajpayee dedicated this institution to the country in 2001. Since then, more than 50 thousand executives have passed out from ISB.

Today ISB is among the top business schools of Asia. Professionals passed out from ISB are helming top companies and giving momentum to the county’s business. Students from here have created hundreds of startups and played a role in creating unicorns. “This is an achievement of ISB and a cause of pride for the entire country”, he said.

The Prime Minister noted that today India is the fastest growing Economy in the group of G20 countries. In the case of Smartphone Data Consumer, India is at number one. If we look at the number of Internet users, then India is second in the world. He said India is also second in the world in the Global Retail Index.

The Prime Minister pointed out that often Indian solutions are being implemented globally. Therefore, “today on this important day, I would like to ask you to link your personal goals with the goals of the country”, he said.

Since 2014, our country is seeing political will and also, reforms are being done continuously. Public support and popular support is assured when reforms are undertaken with determination and political will. He gave the example of adoption of digital payments among people.

The Prime Minister said that resilience and strength of the health sector was proved during the pandemic. Regarding the Covid vaccines, concerns were being raised here whether foreign vaccines would be available or not. But India developed its own vaccines.

Lot of vaccines have been made that in India more than 190 crore doses have been administered. India has also sent vaccines to more than 100 countries of the world. The Prime Minister also talked about the expansion of medical education.

The Prime Minister also noted that bureaucracy has also made firm contributions in the reform process. He credited the people’s participation in the success of the government’s scheme. He said that when people cooperate, quick and better results are assured. In the system now, government reforms, bureaucracy performs and people’s participation leads to transformation. He asked the ISB students to study this mechanism of Reform, Perform and Transform.

The Prime Minister cited the biggest reason that after 2014 we are seeing phenomenal performance in every sport is due to the confidence of our athletes. He added that confidence comes when the right talent is discovered, when there is handholding of talent, when there is a transparent selection and a better infrastructure is available for training, competition.

We can see transformation in sports due to reforms like Khelo India and the TOPS scheme right in front of our eyes, he added. Similarly, he cited the Aspirational District Programme as a great example of performance, value addition, productivity and motivation in the public policy sphere.

Commenting on the changing business landscape where formal, informal, small and large businesses are expanding their horizons and giving employment to lakhs and crores of people. He stressed the need to give more opportunities to grow to small businesses. And help them in connecting with the new local and global markets.

Underlining their immense potential the Prime Minister stressed that to make India future-ready, we have to ensure that India becomes self-reliant. He saw a great role for students from institutions like ISB. “All you business professionals have a big role in this. And this will be a great example of service to the country for you”, he concluded.