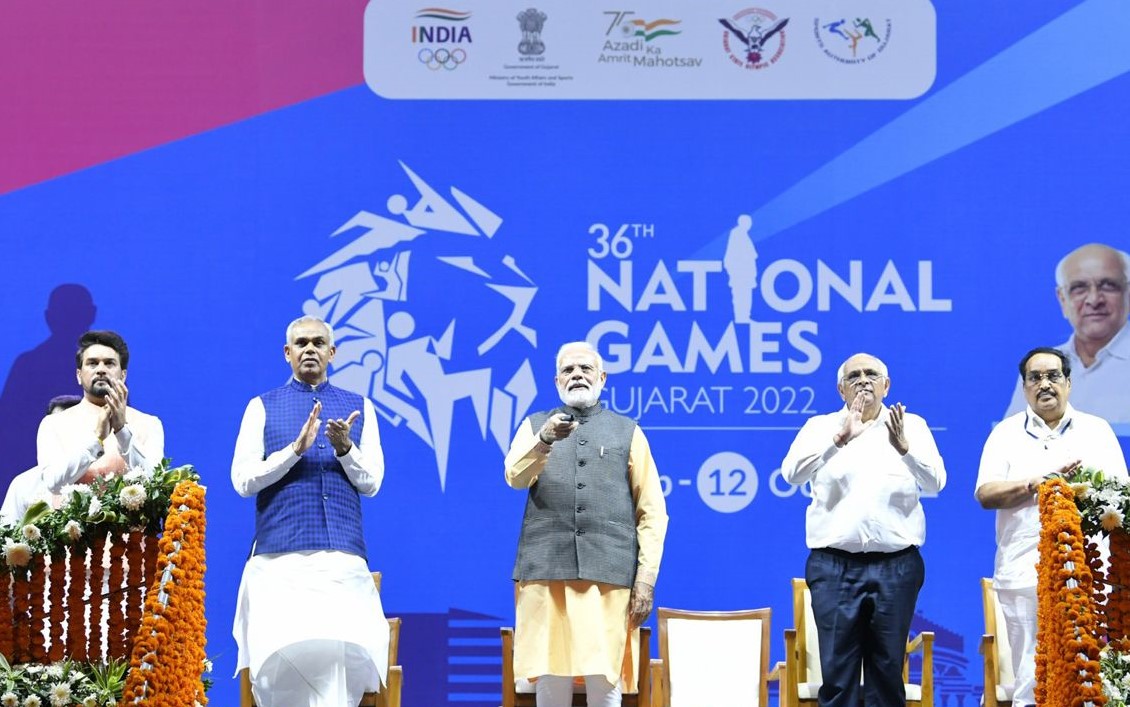 Addressing the gathering, the Prime Minister exclaimed that the exhilarating atmosphere at the inauguration of the National Games is beyond words. He remarked that the feeling and energy of such a grand event are beyond words. More than 7000 athletes, more than 15000 participants, more than 35000 colleges, universities and schools and the direct connection of more than 50 lakh students with the National Games is amazing and unprecedented, he exclaimed. “At the world’s largest stadium, such a young country in the world, and the biggest sports festival in the country! When the event is so wonderful and unique, its energy ought to be so extraordinary”, the Prime Minister remarked.

He recited the Key Words of the National Games Anthem ‘Judega India – Jeetega India’ to the rousing accompaniment of everyone present in the stadium. He said that the confidence shining on the face of athletes is a precursor of the coming golden age of Indian sports. He also praised the capability of the people of Gujarat for organizing such a grand event at such short notice.

Recalling the grand drone show that took place in Ahmedabad yesterday, the Prime Minister said that everyone is astonished and proud to see such a spectacle. “Such careful use of technology, like a drone, will take Gujarat, India to new heights, ‘ the Prime Minister added. Remarking on the official mascot for the National Games 2022 is Savaj, the Asiatic lion, the Prime Minister said that the mascot reflects the mood of India’s youth, a passion for fearless entry into the sporting arena. This is also a symbol of rising India in a global scenario, he said.

Speaking about the uniqueness of the stadium, the Prime Minister said that while other complexes are limited to only a few sports facilities, Sardar Patel Sports Complex has facilities for many sports like Football, Hockey, Basketball, Kabaddi, Boxing and Lawn Tennis. “In a way, it is a model for the whole country. When infrastructure is of this standard, the morale of the athletes also soars”, the Prime Minister added.

Urging the players who are participating in the National Games to enjoy the Navratri event in the state, the Prime Minister said that festivities go beyond the worship of Maa Durga and the joyous celebrations of Garba take place as well. “It has its own identity”, Shri Modi added.

The Prime Minister reiterated the importance of sports in national life. “The victory of the players in the field of play, their strong performance, also paves the way for the victory of the country in other fields. The soft power of sports enhances the country’s identity and image manifold.” He continued “I often tell my friends related to sports – Success starts with action! That is, the moment you start, the very moment success also starts. If you have not abandoned the spirit of moving, then victory keeps chasing you”.

Even during the difficult period of Corona, the Prime Minister said that the morale of the sports persons was not allowed to ebb. “We worked for sports with a sports spirit. Prepared in mission mode for years through schemes like TOPS. Today, from the success of the big players to the future creation of the new players, TOPS is playing a big role.”

He recalled that India gave its best Olympics performance this year at Tokyo Olympics. Similarly, the Thomas Cup victory by the badminton team brought fresh cheers. He also praised the achievement of para-athletes in various international events. He expressed happiness on the equal and strong participation of female athletes in this resurgence.

The Prime Minister pointed out that this success was possible earlier but sports in India was marred by corruption and nepotism, instead of the required professionalism. “We cleaned that and raised confidence in the youth for their dreams”, he said. Remarking on the new India that does not believe only in mere policymaking, but also moves forward in tandem with the youth of the nation, the Prime Minister pointed out efforts like Fit India and Khelo India that have become a mass movement.

The Prime Minister said that the sports budget of the country has increased by almost 70 per cent in the last 8 years. This has led to more and more resources being made available to the players which help in creating more and more opportunities for the players. The Prime Minister remarked that sports universities are being set up in the nation, and advanced sports infrastructures are being erected in every nook and corner of the country. Shri Modi further added that efforts are also being made to make the lives of retired players easier. Work is also being done in this direction so that the new generation can benefit from the experiences of the retiring players.

Throwing light on the history of India’s civilization and culture, the Prime Minister said that Sports have been a part of India’s legacy and growth journey for thousands of years. “In the Azadi Ka Amrit Kaal, the country is reviving this tradition with pride in its heritage.” The Prime Minister further added that the efforts and enthusiasm of the country are not limited to just one sport, but Indian sports like ‘Kalaripayattu’ and Yogasan are also gaining importance.

“I am glad that these games have been included in big events like National Games”, he continued. To the players who are representing these sports here, the Prime Minister said “I want to say one thing in particular. you on the one side, are carrying forward the thousands of years old tradition, while at the same time giving leadership to the future of the sports world. In the coming time when these games will get global recognition, then your name will be taken as legends in these fields.”

In concluding the address, the Prime Minister spoke directly to the players and shared a mantra with them. He said, “If you want to win the competition, then you have to learn to live commitment and continuity.” Speaking of the sports spirit, the Prime Minister pointed out that defeat and victory in sports should never be considered the final outcome. Shri Modi further added that the dreams of a young country like India can be realised if the sports spirit becomes a part of your life.

“You have to remember, where there is movement, there is progress”, Shri Modi added. “You have to maintain this momentum off the ground as well. This pace should be the mission of your life. I am sure, your victory in the National Games will give the nation a chance to celebrate,and will also instill new confidence in the future” the Prime Minister concluded.