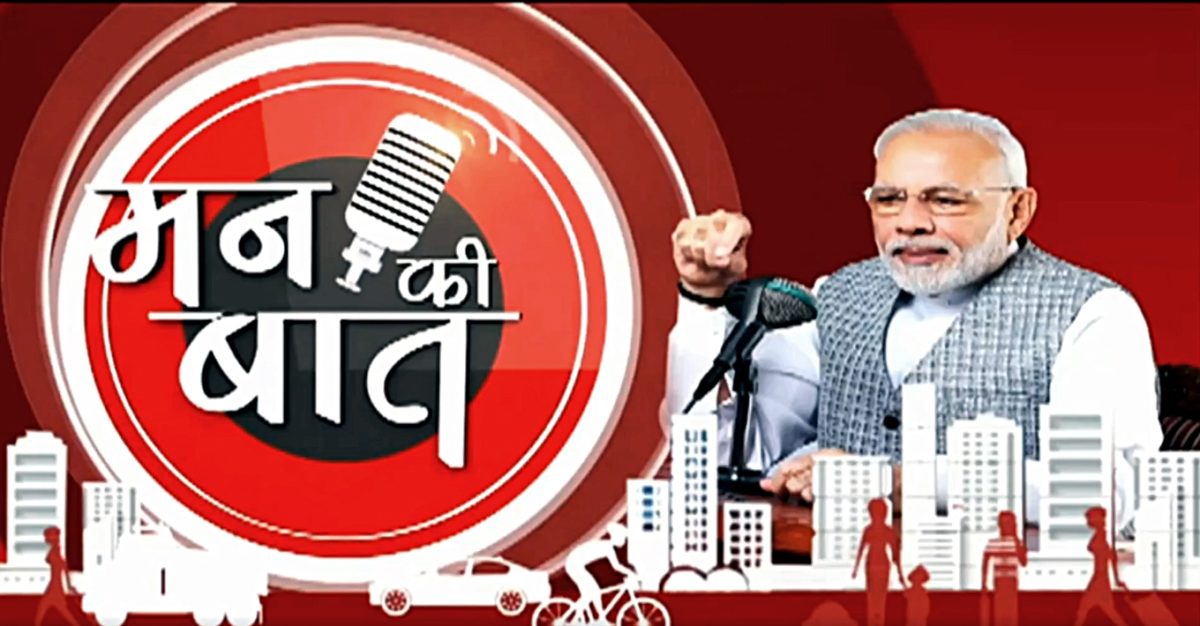 New Delhi: Addressing the nation in his Mann Ki Baat programme on All India Radio, Prime Minister Narendra Modi highlighted that in the past few years, many big feats related to the space sector have been accomplished in the country.

One of these achievements has been the creation of an agency named In-Space. He said this agency is promoting new opportunities in the space sector for the private sector of India. He pointed out that this beginning has especially attracted the youth of the country.

The Prime Minister took pride in the fact that the number of startups in the space sector amounts to more than a hundred. Until a few years ago in the country, no one even thought about startups in the space sector. He said all these start-ups are working on ideas, which were either not thought about earlier, or were considered impossible for the private sector. Modi cited the example of two startups in Chennai and Hyderabad – Agnikul and Skyroot! These start-ups are developing launch vehicles that will take small payloads into space.

Through this, the cost of Space Launching is estimated to come down significantly. Similarly, he took the name of Dhruva Space, another Start-Up of Hyderabad. It is working on High Technology Solar Panels for Satellite Deployer and Satellites. He spoke about Tanveer Ahmed of Digantara, which is another space start-up that is trying to map waste in space. Both Digantara and Dhruva Space are going to make their first launch from ISRO’s launch vehicle on the 30th of June.

The Prime Minister mentioned Neha, the founder of Astrome, a space start-up based in Bangalore. This start-up is making flat antennas which will not only be small, but their cost will also be very low. He said demand for this technology can be all over the world.

Modi also gave the example of Tanvi Patel, who is a school student of Mehsana. She is working on a very small satellite, which is going to be launched into space in the next few months. Like Tanvi, about seven hundred and fifty school students in the country are working on 75 such satellites in the Amrit Mahotsav. The Prime Minister expressed delight that most of these students are from small towns in the country.

The Emergency was imposed in the month of June 1975. Prime Minister Modi recalled that all rights were taken away from the citizens of the country. One of those rights was the Right to Life and Personal Liberty provided to all Indians under Article 21 of the Constitution. He elaborated that the country’s courts, constitutional institutions, and the press, were put under control.

The condition of censorship was such that nothing could be printed without approval. Modi remembered when famous singer Kishore Kumar refused to applaud the government and was banned. His entry on the radio was done away with.

The Prime Minister stated that even after many attempts, thousands of arrests, and atrocities on lakhs of people, the faith of the people of India in democracy did not shake. He said the democratic spirit which runs in the veins of people finally won. The people of India got rid of the emergency and re-established democracy in a democratic way. Mr. Modi admitted that it is difficult to find such an example of defeating a dictatorial mindset, a dictatorial tendency in a democratic way, in the whole world.

He added that during the Emergency, he had the good fortune to have been a witness and a partner in the struggle. Today, when the country is celebrating 75 years of its independence, Modi exhorted Indians to never forget that dreadful period of emergency.

Touching on the topic of Sports, Prime Minister spoke about Olympic gold medalist Neeraj Chopra who was in the headlines recently. Even after the Olympics, he is setting new records of success, one after the other. Neeraj won the silver at Paavo Nurmi Games in Finland. Not only that, he also broke the record of his own Javelin Throw. Mr. Modi said Neeraj once again made the country proud by winning the gold in Kuortane Games. He claimed that this zest is the hallmark of today\’s youth.

The Prime Minister exuded pride that India’s youth are setting new records from Start-Ups to the Sports World. In the recently held Khelo India Youth Games as well, Indian players set many records.  Modi highlighted that a total of 12 records have been broken in these games. Not only that, 11 records have been registered in the names of female players. M. Martina Devi of Manipur has made eight records in weightlifting.

Similarly, Sanjana, Sonakshi and Bhavna have also made different records. He said that with their hard work, these players have proven how much India’s prestige is going to rise in the international sports arena in the coming times.

The Prime Minister mentioned that there has been another special feature of the Khelo India Youth Games. He said that this time, many talents have emerged from very ordinary families.

Modi noted that in their success, their family, and parents have a big role to play. He spoke of the father of Adil Altaf from Srinagar who is a tailor by profession. Similarly, he gave the example of gold winner L. Dhanush’s father who is a carpenter in Chennai. Kajol Sargar’s father works as a tea vendor. Kajol would help her father and practice weight lifting as well.

Mr. Modi went on to add that Tanu of Rohtak has performed a similar kind of miracle. Tanu’s father Rajbir Singh is a school bus driver in Rohtak. He stated that in the sports world now, the dominance of Indian players is increasing. He said that at the same time, a new image of Indian sports is also emerging. Modi pointed out that in Khelo India Youth Games, five indigenous sports were included this time. These are – Gatka, Thang Ta, Yogasan, Kalaripayattu and Mallakhamb.

The Prime Minister exuded pride that an international tournament is going to be held off a game that was born centuries ago in India. This Chess Olympiad will begin on the 28th of July. More than 180 countries are participating in the Chess Olympiad.

Mr. Modi stated that sports and fitness cannot be complete without another name – this is Telangana’s s mountaineer Poorna Malavath. He said that by completing the 7 summit challenge, Poorna has added another feather in her cap of success. The seven summit challenge is the challenge of surmounting the seven most difficult and highest mountain peaks. Mr. Modi lauded Purva for ascending the highest peak of North America Mount Denali and bringing honour to the country. Poorna had accomplished the amazing feat of conquering Mount Everest at the age of just 13.

The Prime Minister also discussed Mithali Raj, one of the most talented cricketers in India. She announced her retirement from cricket this month. Mr. Modi said Mithali has not only been an extraordinary player but has also been an inspiration to many players.