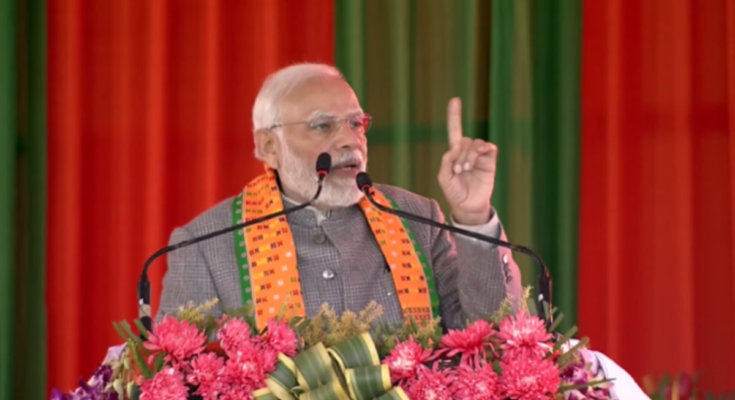 New Delhi: The Prime Minister, Shri Narendra Modi laid the foundation stone, and inaugurated and dedicated to the nation multiple projects worth over Rs. 2450 crores in Shillong, Meghalaya today. Earlier in the day, the Prime Minister attended the meeting of the North Eastern Council at the State Convention Centre in Shillong and participated in its golden jubilee celebrations.

The multiple projects include the inauguration of 320 completed and 890 under construction 4G mobile towers, the new campus of IIM Shillong, at Umsawli, the Shillong – Diengpasoh Road which will provide better connectivity to new Shillong satellite township and four other roads projects across the three states viz. Meghalaya, Manipur and Arunachal Pradesh.

The Prime Minister also inaugurated Spawn Laboratory at Mushroom Development Center and Integrated Beekeeping Development Centre in Meghalaya and 21 Hindi libraries in Mizoram, Manipur, Tripura and Assam. The Prime Minister laid the foundation stone of six road projects across the states of Assam, Meghalaya, Manipur, Mizoram and Tripura. He also laid the foundation stone of the Integrated Hospitality and Convention Centre at Tura and Shillong Technology Park Phase -II.

Addressing the gathering, the Prime Minister remarked that Meghalaya is a state that is prosperous in nature and culture and this very prosperity is reflected through the warmth and welcoming nature of the people. He congratulated the citizens of Meghalaya for the numerous upcoming and newly inaugurated projects ranging from connectivity, education, skill and employment for further development in the state.

Drawing an analogy to the red card shown in football to a person who goes against the sportsman spirit, the Prime Minister remarked that the government has shown the red card to all the obstacles that come in the way of the development of North East. “Be it corruption, discrimination, nepotism, violence or vote-bank politics to disrupt the development in the region, we are working with dedication and honesty to uproot all these evils”, he remarked. The Prime Minister pointed out that even though such evils are deeply rooted, we have to work towards eliminating each one of them. He further added that the efforts of the government are showing positive results.

Throwing light on the emphasis on sports development, the Prime Minister highlighted that the central government is moving forward with a new approach and its benefits can be clearly seen in the North Eastern regions as well. He informed that apart from India’s first sports university, the North Eastern region is well equipped with multiple infrastructures like multipurpose hall, football field and athletics track.

He further added that work is underway on ninety such projects. The Prime Minister said with assurance that even though we are looking at the international teams playing in the football world cup in Qatar, he firmly believes in the power of the youth and remarked that the day is not far when India will organise such a similar celebration and every Indian will also cheer for our team that will take part in it.

“Development is not limited to budget, tenders, laying foundation stones and inaugurations”, the Prime Minister continued as he stated that such was the norm even before 2014, “the transformation that we witness today is a result of the change in our intentions, resolutions, priorities and our work culture. The results can be seen in our processes.”

The Prime Minister elaborated, “The resolution is to build a developed India with modern infrastructure, modern connectivity. The intention is to connect every region and section of India with the objective of rapid development through Sabka Prayas (everyone’s efforts). The priority is to remove deprivation, reduce distances, engage in capacity building, and give more opportunities to the youth.

And the change in work culture signifies that every project and programme be completed within the time limit.” The Prime Minister informed that the central government is spending Rs 7 lakh crore only on infrastructure this year, while 8 years ago this expenditure was less than Rs 2 lakh crore. He also pointed out that states are competing within themselves when it comes to boosting infrastructure.

Giving examples of infrastructural developments in the North East, the Prime Minister highlighted the fast-paced work to connect all the capitals of the North East including Shillong with rail service and the increase in number of weekly flights from 900 before 2014 to 1900 today. The Prime Minister informed that under the UDAN scheme, flights are on 16 routes in Meghalaya and the result is cheap airfares for the people of Meghalaya.

Highlighting the benefits to the farmers of Meghalaya and North East, the Prime Minister informed that the fruits and vegetables grown here are easily accessible to the markets of the country and abroad through the Krishi Udaan scheme.

The Prime Minister drew everyone’s attention to the connectivity projects that have been inaugurated today and informed that 5 thousand crore rupees have been spent on the construction of the National Highway in Meghalaya in the last 8 years while the number of rural roads built in the last 8 years under the Pradhan Mantri Sadak Yojana in Meghalaya is seven times more than what was built in the previous 20 years.

Talking about the increasing digital connectivity for the youth of the Northeast, the Prime Minister informed that optical fibre coverage has increased 4 times in the Northeast and 5 times in Meghalaya when compared to 2014. He further added that 6 thousand mobile towers are being erected to take mobile connectivity to every part of the region with an outlay of 5 thousand crores.

“This infrastructure will give new opportunities to the youth of Meghalaya” the Prime Minister emphasised. Regarding education infrastructure, the Prime Minister commented that with IIM and the technology park education, earning opportunities will increase in the region. He also informed that Northeast is witnessing the construction of more than 150 Eklavya schools out of which 39 are in Meghalaya.

The Prime Minister gave the example of the Parvatmala Scheme which is building a network of ropeways and the PM DEVINE scheme which is going to give a new impetus to the development of North East by ensuring easy approval of big development projects. He added, “A budget of Rs 6,000 crore has been fixed for the next 3-4 years under PM-Divine.”

Reflecting on the ‘divide’ approach of the previous ruling governments for the North East, the Prime Minister remarked that our government has come up with ‘divine’ intentions. “Be it different communities, or different regions, we are removing all kinds of divisions. Today, in the North East, we are laying emphasis on building corridors of development, not borders of disputes” he said.

The Prime Minister observed that in the last 8 years, many organisations have shunned the path of violence and have taken refuge in permanent peace. Speaking about the needlessness for AFSPA in the North East, the Prime Minister remarked that the conditions are constantly improving with the help of the state governments while boundary disputes between the states which were going on for decades are being resolved.

“Today we are boldly building new roads, new tunnels, new bridges, new railway lines, and airstrips on the border. Desolated border villages are being turned vibrant. The speed needed for our cities is needed for our border too.” The Prime Minister said.

The Prime Minister recalled his meeting with His Holiness the Pope and said that both the leaders discussed the challenges being faced by humanity today and arrived at a consensus for a concerted effort to meet them. ‘We need to strengthen this sentiment’, the Prime Minister said.

Highlighting the politics of peace and development adopted by the government, the Prime Minister said that the biggest beneficiary of this is our tribal society. The development of tribal areas is the priority of the government while maintaining the tradition, language and culture of the tribal society. Giving the example of abolishing the ban on bamboo harvesting, the Prime Minister informed that it gave impetus to the manufacture of tribal products associated with bamboo. “850 Van Dhan Kendras have been established in the North East for value addition in the produce obtained from forests. Many self-help groups are associated with them, many of which belong to our sisters”, he informed.

Shri Modi said that social infrastructure like houses, water and electricity have massively benefited the Northeast. In the past few years, 2 lakh new households received electricity connection. More than 70 thousand houses were approved for the poor and 3 lakh households got piped water connections. “Our tribal families were the biggest beneficiaries of these schemes,” he said.

Concluding his address, the Prime Minister wished for continued pace of the region’s development and credited the blessing of the people as the base of all energy that is being put into the development of the Northeast. He conveyed his best wishes for the upcoming Christmas.