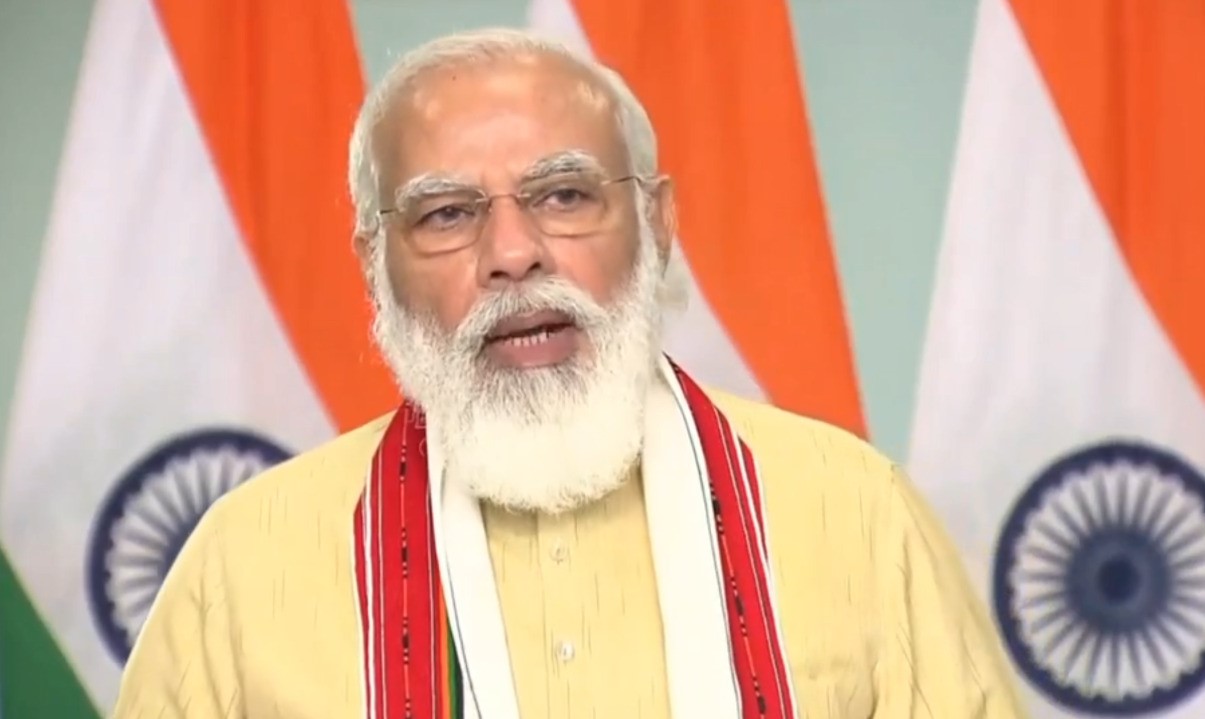 New Delhi: Prime Minister Narendra Modi today said the success of the COVID vaccination programme displays the capability of India. He said nation is surging ahead with a new zeal and energy after crossing the 100 crore vaccine doses mark.

Addressing the nation in his Mann Ki Baat programme on All India Radio, Modi said the  figure of 100 crore vaccine doses might be huge but there are  lakhs of inspirational stories behind it.

The Prime Minister said he had  firm belief that the vaccination campaign will be successful since he is well acquainted with the capabilities of the nation and its people. He said he knew that healthcare workers would leave no stone unturned and set a new example through their resolve. He said they established a new benchmark in service to humanity through innovation and sheer determination.

Modi spoke to Poonam Nautiyal from Bageshwar in Uttarakhand who persevered day and night for the inoculation of people in her area. He told her that it is due to the hard work put in by lakhs of health workers like her that India could cross the hundred crore vaccine doses mark.

Quoting Sardar Patel, Mr Modi said people can take this country to loftier heights only through united efforts. He said there is a lot to learn from the life and thoughts of Sardar Patel.  Mr Modi urged everyone to read a recently published pictorial biography of Sardar Patel brought out by Information and Broadcasting Ministry.

The Prime Minister spoke about three competitions, that are going to begin on the birth anniversary of Sardar Patel on the 31st of October.  They are – patriotic song competition, Rangoli competition and Lullaby competition.

Prime Minister urged young people to instill Amrit Mahotsav with energy by writing patriotic songs. These patriotic songs can be in any language. Mr Modi said it is essential that these creations reflect new India and fuel the country’s resolve for the future.

Another listener of Mann Ki Baat had suggested that Amrit Mahotsav should be connected to the art of Rangoli as well. Prime Minister Modi said  India has the tradition of lending colours to festivals through Rangoli. He said the diversity of our country is visible in Rangoli.

Modi said values are inculcated in young children through lullabies. He said this practice should be revived and urged people to write lullabies pertaining to patriotis. He said there should be reference to modern India, the vision of 21st century India and its dreams in these lullabies.

He said in the coming days, the Ministry of Culture will provide all the information related to these events. This information will also be available on the website of the ministry, and will be circulated through social media.

Prime Minister stated that Bhagwan Birsa Munda is an  inspiration when it comes to loving Mother Earth and nature. He strongly opposed every policy of foreign rule which was detrimental for the environment.

In 1947-48, when the Universal Declaration of UN Human Rights was being drafted, “All Men are Created Equal” was being inscribed in that Declaration. However, a Delegate from India, Hansa Mehta objected to this and the inscription was changed to “All Human Beings are Created Equal”. Mr Modi said this was in consonance with India’s age-old tradition of Gender Equality.

Another delegate, Lakshmi Menon also strongly put forth her views on the issue of gender equality. The Prime Minister said that in 1953, Vijaya Lakshmi Pandit became the first woman President of the UN General Assembly.

Modi said India has always strived for world peace. He expressed pride that India has been a part of UN peacekeeping missions continuously since the 1950s. India is also playing a leading role in addressing issues related to poverty alleviation, and climate change. Apart from this, India is working closely with World Health Organization to popularize Yoga and AYUSH. In March 2021, WHO announced that a Global Centre for Traditional Medicine would be set up in India.

Prime Minister remembered the words of former Prime Minister Atal Bihari Vajpayee who made history by addressing the United Nations in Hindi. An excerpt of Vajpayee ji’s address was played for the listeners of ‘Mann Ki Baat’.

Prime Minister said Police Commemoration Day was celebrated recently on the 21st of October. He said it was earlier believed that services like army and police are meant only for men. He said the statistics from the Bureau of Police Research and Development show that in the last few years, the number of women police personnel has doubled. In 2014, their number was close to 1 lakh 5 thousand which doubled by 2020 and reached up to 2 lakh 15 thousand.

Even in the Central Armed Police Forces, the number of women has almost doubled in the last seven years. Mr Modi said the daughters of the country are performing even the toughest duties with full force and zeal. He said many of them are currently undergoing one of the most difficult trainings, that of Specialized Jungle Warfare Commandos.

Modi said the most positive effect of this is on the morale of our police force as well as society. He added that the presence of women security personnel naturally instills a sense of confidence among the people, especially women.

Discussing  the topic of Drones, Prime Minister said India is one of the first countries in the world, which is preparing digital records of land in its villages with the help of drones.

The Army, Navy and Air Force have also placed orders worth more than 500 crore rupees with the Indian drone companies. Mr Modi said government is taking all possible steps to become a leading country in Drone Technology.

Speaking about Swachh Bharat Abhiyan, Mr Modi urged people to pledge against using single use plastic. He said cleanliness should not just be limited to homes in thisDiwali, but the neighbourhood should be clean too.

He spoke about  Saparom Naya Sarai, a village near Ranchi. There used to be a pond in this village, but people had started using this pond area for defecating in the open. Under the Swachh Bharat Abhiyan, after toilets were built in everyone’s homes, the villagers worked hard to  make a park at the place of the pond. Today that place has become a community spot for people.

The Prime Minister lauded Ramveer Tanwar of Uttar Pradesh, who is known as the Pond Man. Ramveer has revived many ponds by cleaning them.