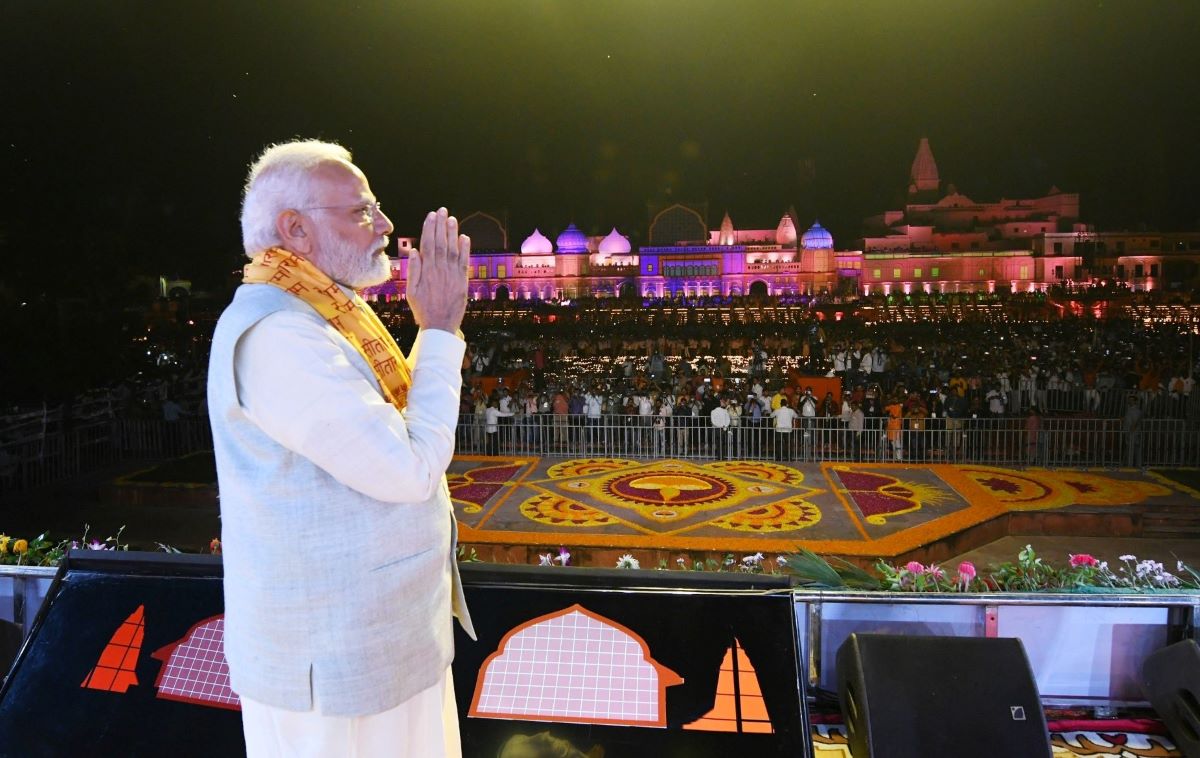 Addressing the gathering, the Prime Minister said that the fortune of having darshan of Shri Ramlala and Rajya Abhishek is possible only by the blessings of Lord Shree Ram. Bhagwan Ram’s Abhishek further strengthens his values and ideals in us even further. With his Abhishek, the path shown by Lord Shree Ram gets even more clear. In every particle of Ayodhya ji, we see his philosophy, the Prime Minister said. “This philosophy is getting spread all over the world via Ram Leelas of Ayodhya, Saryu Aarti, Deepotsav and research and study on Ramayana” Shri Modi added.

The Prime Minister said that this Deepavali has come at a time when India has completed 75 years of its independence and we are celebrating Azadi Ka Amrit Mahotsav. In this Azadi Ka Amrit Kaal, it is the resolve like that of Lord Shri Ram which will take the country to new heights. The Prime Minister said that one can find the inspiration of Sabka Saath Sabka Vikas and the principles of Sabka Vishwas and Sabka Prayas in Lord Rama’s words and thoughts, in his rule and his administration.

“For every Indian”, the Prime Minister continued, “the principles of Lord Shri Ram are the aspirations of a developed India. It is like a lighthouse that provides the inspiration to achieve the most difficult targets.”

Recalling his exhortation from the Red Fort this year about the ‘Panch Pran’, the Prime Minister said, “energy of the ‘Panch Pran’ is connected with the element of citizens’ sense of duty. He said that “today, in the sacred city of Ayodhya, on this auspicious occasion, we have to rededicate ourselves to our resolution and learn from Lord Ram.”

Recalling the ‘Maryada Purushottam’ the Prime Minister said, that ‘maryada’, teaches us decorum and also teaches to give respect and the sentiment on which ‘maryada’ insists is Kartavya i.e. duty. Calling Lord Ram the living embodiment of duties, the Prime Minister said that in all his roles, Shree Ram always gave foremost priority to his duties.

“Ram does not leave anyone behind, Ram never turns away from his duties. Thus Ram represents that Indian notion that holds that our rights get automatically realized through our duties”, the Prime MInister elaborated. The Prime MInister pointed out that in the original copy of India’s constitution there is an image of Lord Ram, Maa Sita and Lakshman.

The same page of the constitution talks about Fundamental Rights. Meaning while, on one hand, the Constitution guarantees fundamental rights, at the same time there is an eternal cultural understanding of duties in the form of Bhagwan Shree Ram, he said.

Referring to the ‘Panch Prans’ regarding pride in our heritage and romoval of slave mentality, the Prime Minister said that Shree Ram also guided us on this path by keeping mother and motherland above even heaven. Giving examples of Ram Mandir, Kashi Vishwanath, Kedarnath and Mahakaal Lok, the Prime Minister remarked that the government has rejuvenated the places of worship that make for a part of India’s pride.

The Prime Minister recalled the time when people would question the existence of Lord Shri Ram and hesitated to talk about it. “We have broken this shackling feeling of inferiority complex and put forward a holistic view of the development of India’s pilgrimages in the last eight years. The Prime Minister informed that projects worth thousands of crores are underway in Ayodhya.

From the development of roads to the beautification of ghats and crossroads to infrastructural improvements like the new railway station and a world-class airport, the Prime Minister remarked that the entire region will reap immense benefits from the increased connectivity and international tourism. He also informed that work is underway for the development of Ramayan Circuit.

The Prime Minister highlighted the societal and international dimensions of cultural rejuvenation and informed that Nishad Raj Park is being developed in Shringverpur Dham that will house a 51 feet high bronze statue of Lord Shri Ram and Nishad Raj. He further added that the statue will propagate Ramayan’s message of all-inclusiveness that ties us to the resolve of equality and harmony.

The Prime Minister underlined that Ayodhya is a reflection of the great cultural heritage of India. He said that even though Ram was the prince of Ayodhya, his adoration belongs to the entire country. His inspiration, his penance, his path, is for every countryman. It is the duty of all of us Indians to follow the ideals of Lord Rama. We have to live his ideals continuously, and apply them in life, he said. The Prime Minister concluded by reminding the people of Ayodhya about their dual duties of welcoming everyone to this sacred city and keeping it clean. Identity of Ayodhya should develop as a ‘Kartavya Nagari’ city of duty, he concluded.