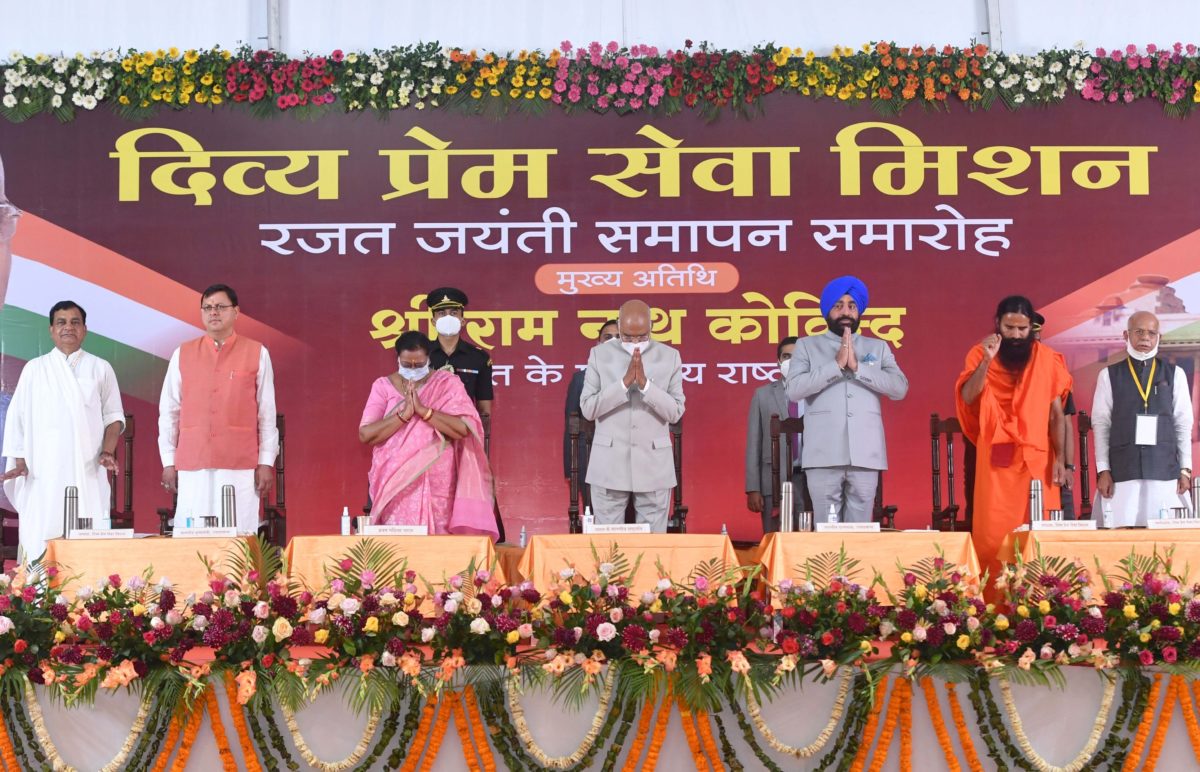 Speaking on the occasion, the President said that it gives him immense pleasure to be present at the Silver Jubilee celebration of Divya Prem Seva Mission, which is consistently contributing to the welfare of humanity since its establishment. He said that the basic element of spirituality is welfare and service of humankind and the Divya Prem Seva Mission is continuously following the same path.

The President said that he has been witnessing the activities and development of this mission since it started medical services for leprosy afflicted people in a thatched hut in Haridwar. Praising the founder of the Mission, Dr Ashish Gautam, he said that it was not easy for a youth of Prayagraj to come to Haridwar two decades ago and establish this institution by going against the traditions of the society. But with his determination and perseverance, he has set an example.

The President noted that Divya Prem Seva Mission is undertaking many exemplary and commendable activities such as clinic for treating leprosy patients, schools for children of socially marginalised leprosy patients, hostels for students specially for girls students and skill development centre, for the overall development of children residing there. He congratulated the founders of the Mission and their associates for such excellent service and dedication.

The President said that all we know that untouchability was abolished and made punishable offence under the Constitution after independence. Untouchability based on caste and religion was abolished by Article 17 of the Constitution, but the centuries-old untouchability towards people afflicted by leprosy has not been completely eradicated even today. It is unfortunate that many misconception and stigma is still present in the society regarding this disease.

The President said that psychological rehabilitation of leprosy afflicted people is as important as their physical treatment. The Parliament has passed the “Rights of Persons with Disabilities Act – 2016” under which the Indian Lepers Act 1898 has been repealed and discrimination against people afflicted by leprosy has been legally abolished. Persons cured from leprosy have also been included in the list of beneficiaries in the 2016 Act.

The President said that Mahatma Gandhi, during his life dedicated to the service of humanity, used to treat and take care of leprosy patients. According to Gandhiji, the best way to know oneself is to dedicate oneself in the service of mankind. He believed that leprosy is also a disease like cholera and plague which can be treated. Therefore, those who consider its patients inferior are the actual patients. Gandhiji’s message is relevant even today.

The President said that the youth of our country can contribute in clearing misconceptions related to leprosy among the people. They can spread awareness among the people about the treatment of this disease through organisations like NSS. He urged the youth to take inspiration from exemplary examples of serving the leprosy afflicted people and also give their active contribution in eradication of social stigma associated with leprosy.