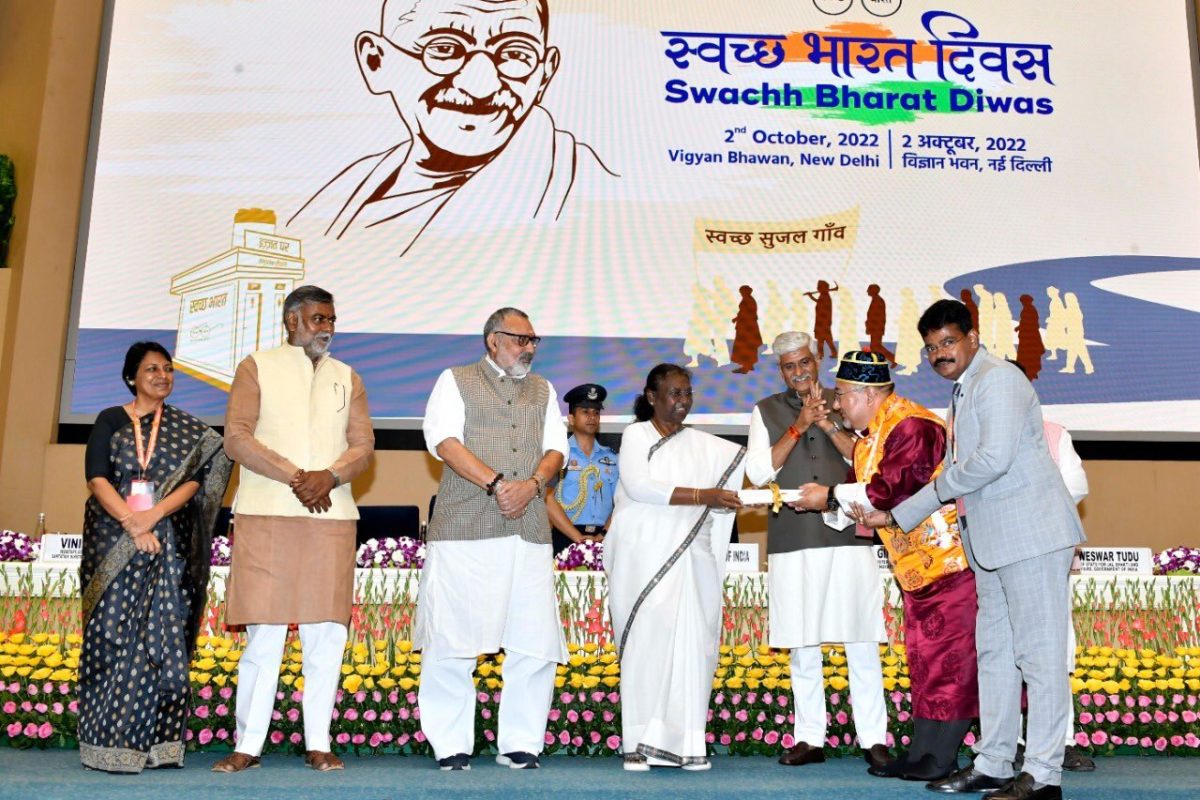 Speaking on the occasion, the President paid tributes to the Father of Nation Mahatma Gandhi. She said that Gandhiji’s thoughts are eternal. Like truth and non-violence, he also stressed on cleanliness. His resolve on cleanliness was aimed to remove social distortion and to build a new India. Therefore, celebrating his birthday as ‘Swachh Bharat Diwas’ is a true tribute to him.

The President noted that since the launch of ‘Swachh Bharat Mission-Gramin’ in 2014, more than 11 crore toilets have been constructed and about 60 crore people have changed their habit of open defecation. She expressed happiness that through this mission, India has achieved the UN’s Sustainable Development Goal number-6, 11 years before the deadline of 2030.

The President said that ‘Swachh Bharat Mission-Gramin’ is a behaviour-change movement. During the Covid pandemic, everyone realized that toilets, the habit of washing hands with soap, and water supply through taps have acted as a shield in this calamity. She said that the Government of India is implementing the second phase of ‘Swachh Bharat Mission-Gramin’, which aims to make all six lakh villages of the country ODF Plus.

Having achieved success against open defecation, we now have to address more complex and technical problems like solid and liquid waste management. She was happy to note that since the beginning of the second phase of ‘Swachh Bharat Mission-Gramin’, more than 1.16 lakh villages have declared themselves as ODF Plus and the work of solid and liquid waste management has also started in about three lakh villages.

The President said that along with cleanliness, the Government of India is also working on the goal of providing quality drinking water to every household. The ‘Jal Jeevan Mission’ has set the target of providing regular and quality drinking water to every household by the year 2024. She noted that at the time of the launch of Jal Jeevan Mission in 2019, only 3.23 crore rural households had tap water supply, which has reached to about 10.27 crore in the past three years.

She said that ODF as well as access to tap water has led to a significant reduction in water-borne diseases in recent years. But our goal is much bigger. We have to set an example for the world in the field of water management and sanitation.

The President said that today, when we are entering the Amrit-Kaal, our resolve should be – to build a healthy, clean and self-reliant India. In achieving this goal, we will face huge challenges as providing basic facilities to such a large population will require modern technology and abundant resources.

She expressed confidence that we will be successful in making India a developed and self-reliant nation with the joint efforts of our political leadership, scientists, doctors, engineers, teachers and above all the aware citizens.