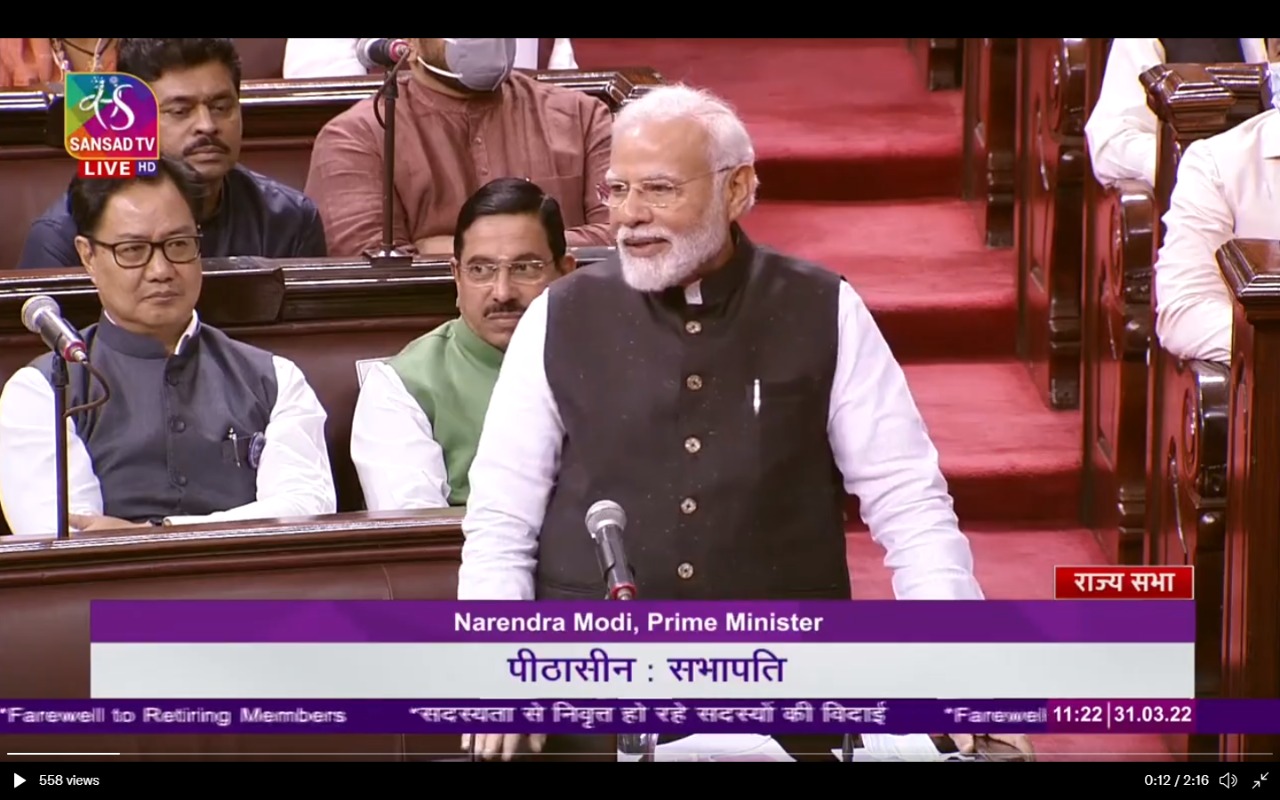 New Delhi: Prime Minister Narendra Modi said that experience plays a vital role in solving complex problems. He was speaking at the farewell of 72 Rajya Sabha members today who are going to retire between April to July of this year after completing their terms.

Recalling the vast experience of the retiring members, Mr. Modi said, Rajya Sabha members have a lot of experience and sometimes experience becomes more important than knowledge. He said, members have spent a long time in this Parliament and the Upper House has contributed a lot in the lives of members. He urged the members to use this experience in the interest of the country and write down their experiences gathered in the house which will further help the upcoming generation.

The Prime Minister said, as the nation is celebrating the Azadi Ka Amrit Mahotsav, it is the responsibility of everyone to contribute toward the nation. He urged the members to inspire the upcoming generation through Azadi Ka Amrit Mahotsav. Appreciating the experiences and contribution of the retiring members, Chairman M. Venkaiah Naidu said, these 72 members constitute a vast pool of considerable legislative experience, domain knowledge, and Parliamentary skills.

He said, 27 members accounting for 38 per cent of those retiring have the experience of serving two or more terms in Rajya Sabha. He added, four Ministers – Nirmala Sitharaman, Piyush Goyal, Mukhtar Abbas Naqvi and Ram Chandra Prasad are completing their tenures during this period. He urged the legislators to be propelled by Passion, Performance and Procedural Integrity and desist from disrupting the law making bodies and uphold the honour and privilege bestowed on them by the people. The Chairman voiced concern that this house has lost over 35 per cent of the functional time due to disruptions since 2017.

Deputy Chairman Harivansh said, the experience of the retiring members will continue to inspire the coming generation. He recalled the contribution of several MPs during his speech. Tiruchi Shiva of DMK said, these 72 retiring members are renowned, prominent and stalwarts. He said, they are retiring from this House, but their career will see their contribution in various other fields. One of the retiring MP Prasanna Acharya said that Parliament is a leading witness of great movement. He said, during his term, he witnessed passing of several historic bills. He said, democracy means both majority and minority. He added that the opposition gives vibration to democratic bodies.