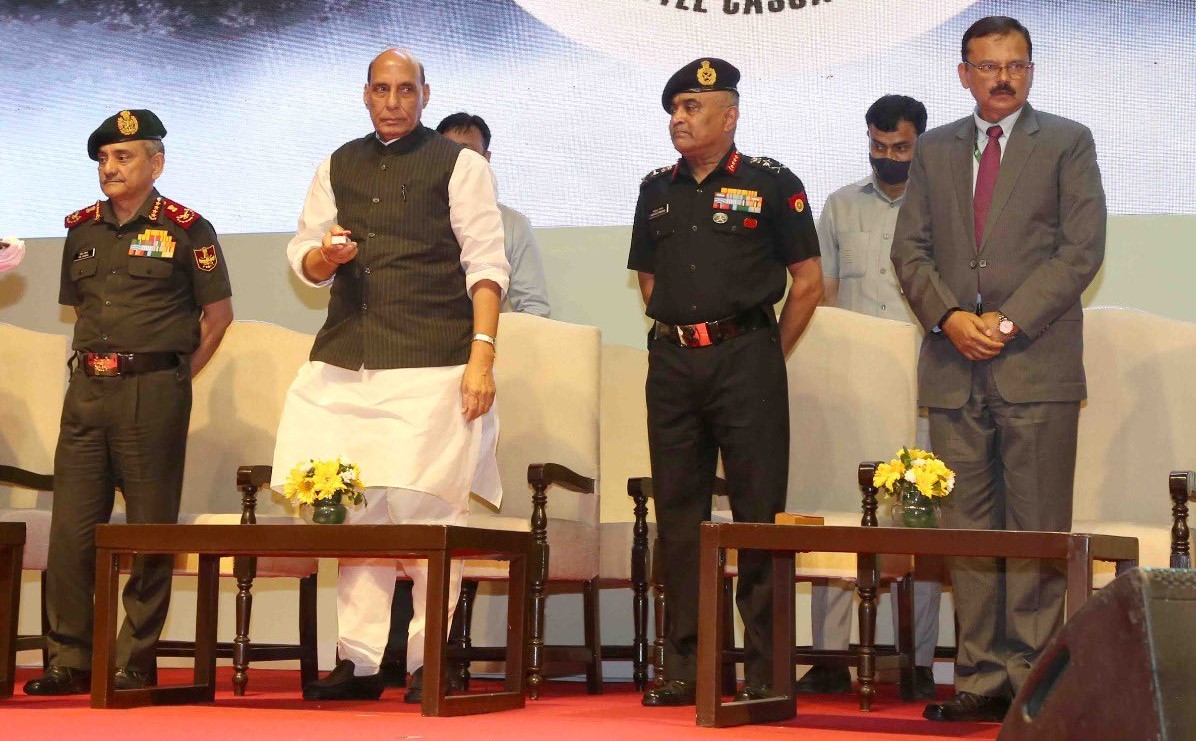 New Delhi: Raksha Mantri Shri Rajnath Singh launched ‘Maa Bharati Ke Sapoot’ website (www.maabharatikesapoot.mod.gov.in) for contribution to the Armed Forces Battle Casualties Welfare Fund (AFBCWF) at a function organised at the National War Memorial Complex in New Delhi on October 14, 2022. The AFBCWF is a Tri-Service fund, which is utilised for grant of immediate financial assistance to the families of soldiers/sailors/airmen who lay down their lives or get grievously injured in active military operations.

While the Government has initiated a large number of welfare schemes for the soldiers killed or disabled during active combat operations, there has been a strong public sentiment and requests from citizens, corporate heads, banks and industry captains to contribute to the cause of welfare of the soldiers and their families. The website will enable people to contribute online directly into the fund. A certificate of online contribution can also be downloaded.

In his address, the Raksha Mantri paid glowing tributes to the valiant soldiers of the Armed Forces whose sacrifice and unwavering commitment keeps the country safe from those who try to cast an evil eye. “Names of great personalities like Maharana Pratap, Veer Shivaji, Bhagwan Birsa Munda, Rani Laxmibai, Bhagat Singh, Chandrashekhar Azad and Ashfaqullah Khan will be etched in our hearts forever. Their sacrifices continue to be an inspiration for all. It is our Armed Forces who are at the fore preserving our freedom,” he said.

Shri Rajnath Singh commended the Armed Forces for always protecting the sovereignty, unity & integrity of the country by responding to threats such as wars and cross-border terror activities with courage and promptness. Therefore, it as the moral responsibility of the citizens to come forward and support the soldiers & their families in the same way they fulfil their duties of protecting the nation, he said.

Referring to the public support to the Armed Forces during 1962 & 1971 wars as also the ‘Bharat Ke Veer’ initiative he took for the welfare of Central Armed Police Forces personnel during his stint as the Home Minister, the Raksha Mantri asserted that it has always been the country’s tradition of extending all possible help to its soldiers. He described the AFBCWF as one of the major steps in that direction, urging the people to contribute generously to the fund.

Shri Rajnath Singh stated that through this contribution, citizens can contribute to the welfare of the Armed Forces & their families and Nation Building as a whole. “Everyone should play their part in the country’s journey of progress. One should become a responsible rider in this journey and not a free-rider. It is our duty to actively participate in nation-building,” he said.

In a video message, Shri Amitabh Bachchan, who is the ‘Goodwill Ambassador’ of the initiative, expressed his gratitude towards the families of the fallen heroes and exhorted people to come forward and contribute to the fund.

On the occasion, the Raksha Mantri also felicitated the Next of Kin of fallen heroes and disabled soldiers. Parents and relatives of many war-decorated soldiers graced the occasion. Various performances included rendering of a poem by Shri Manoj Muntashir Shukla, Army Symphony Band, Singer Mohit Chauhan, martial arts performance by Gatka & Kalarippayattu teams of the Army, duet by Dr L Subramaniam and Smt Kavita Krishnamurthy and sharing of views by actor Sidharth Malhotra.

Indian Army, on behalf Ministry of Defence, Department of Ex-Servicemen Welfare, is maintaining an account for the fund. Besides online donation, the conventional systems of donations will continue. Donations can be made through a Demand Draft drawn in favour of Armed Forces Battle Casualties Welfare Fund payable at New Delhi.